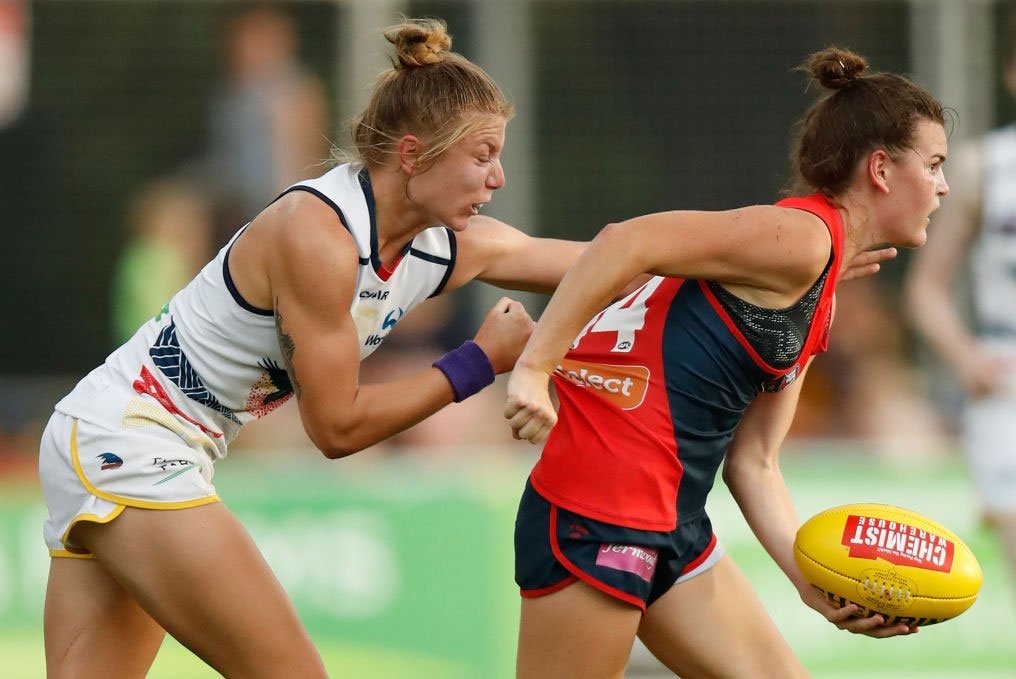 State of Origin footy is right upon us – but this time, for the girls! We’re pumped that AFL Women’s is holding its inaugural State of Origin match, between Victoria and the Allies on (Saturday Sept 2). So is Lily Mithen, since she’ll be one of the players who’ll be repping for Victoria.

We chat to the 19-year-old – who plays for the Melbourne Demons AFLW team, and Geelong in the VFLW – about healthy snacking, the best music to train to, and of course, the big game…

How are you feeling about the State of Origin?
Super excited. It’s such a big opportunity, I can’t wait to be a part of it. It’s pretty awesome to be a part of the ‘first’ of something – it was great to be part of the first year of AFL Women’s this year, and State of Origin has been a massive part of AFL footy, so for the women to take it on board, it’s really exciting. I’ll be playing alongside people I’ve looked up to for the last few years. Hopefully we’ll draw a bit of a crowd and make some noise.

How did you start playing footy?
My footy pathway was actually pretty similar to what a boy’s looks like. I played Auskick from age 5, played junior footy with the boys until I was about 14 – and then started playing the girls through women’s footy. I was able to play for Geelong [where I grew up], for Victoria. Then I turned 18 and was able to nominate for the AFLW draft. It’s just that when I was growing up, I didn’t really know that that’s what I could aspire to. When I was young I said I was going to be the first girl to ever play in the men’s AFL – probably not very realistic when you’re 158cm!

So you work at the Cotton On Group – what do you do there?
I work with the Cotton On Foundation, I’m an intern at the moment. I’ve worked with the Cotton On Group for about three years, I was in-store for two-and-a-half years and then I’ve just come out to head office a few months ago. The Foundation does work with schools over in Uganda mostly, but also in Thailand and other regions of Asia. Our key message is empowering youth through education. It’s pretty cool coming to work knowing that your work is to change lives.

This is how happy I am to be playing footy on Saturday ??

How do you juggle work and AFL?
The Cotton On Group is so supportive of their people here at head office and in their stores but also in the wider community, and I think that’s the beauty of working for a company that do really good things, you get the benefits too, with how they support you and what they allow you to do around working hours and things like that. I have AFL commitments, so my hours are all based around my training schedule, which is unreal.

It’s also nice that there’s that partnership between the Cotton On Group and AFLW – in that your uniforms are made by the Cotton On Group…
Yep, the Cotton On Group made all the players’ jumpers and apparel, and that’s a really nice link. I got a little sneak preview of the State of Origin jumpers the other week. I think it’s another link to show that they are supporting things that are up-and-coming, and it’s great to see that they’re throwing their support behind women in sport.

What do you love about AFL?
It’s so much fun and, especially female footy, is so inclusive. The beauty of women’s footy is that no one’s playing it for money or for all the accolades because it’s not quite at that level yet. So everyone is playing it just for the love of the game and for the amount of fun they have. I think that culture will remain for many years to come, which is really exciting.

And now, some quickfire questions… What do you like doing in your downtime?
Going for coffee with my friends.

Favourite snack?
I love almonds. Yep, you can usually find handfuls of almonds in my pocket.

Favourite holiday destination?
Noosa. Can’t go wrong there, can you? I love the weather and the beach and the fact that we always holidayed there, so many memories.

What do most people not know about you?
Um, I’m pretty open-book so that’s too hard!

The NAB AFL Women’s State of Origin match will be broadcast live nationally at 7:40pm on the Seven Network and Fox Footy. Entry to the match, at Etihad Stadium in Melbourne, is free of charge. Victorian and Allies squad selection is based on where a player is born – not which state they’re currently playing in.

It's been a pleasure being a demon ? Are you sure we can't just play everybody twice @aflwomens ?!