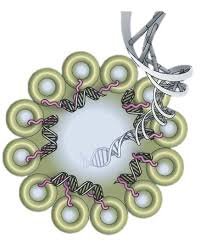 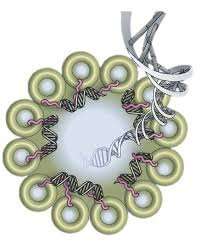 One answer was provided in a recent paper appearing in Science that shows released mtDNA can lead to lupus. In a nutshell, when mitochondria are stressed in various ways, mtDNA breaks into fragments and then binds to voltage-dependent anion channels (VDACs) in the outer membrane. This causes individual VDAC monomers to aggregate and form a meta-pore in their center through which the mtDNA can escape. Once in the cytoplasm, various nonspecific sensors including Toll receptors for single-stranded DNA, and the GAS-STING pathways for double-stranded DNA unleash a full-blown type I interferon (IFN) response.

Each VDAC monomer itself contains a highly-tuned channel that passes critical molecules of different sizes and charges in either direction according to the current prevailing membrane potential. Eliminating VDAC function entirely is incompatible with higher forms of eukaryotic life. Fortunately, the authors found that lupus-like immune activation can be eliminated by blocking just one form of the channel, the VDAC1 variety, with the oligomerization inhibitor VBIT-4.

The celebrity singer Seal suffers from discoid lupus erythematosis. It is a cutaneous form of lupus that is frequently related to SLE. As a general treatment strategy, interfering with mtDNA release alone might not fully eliminate all the AMAs someone like Seal might possess. However, for other forms of the disease, like lupus nephritis, such an approach might be more useful since all the AMAs found appear to be against double stranded mtDNA.

Other kinds of autoimmune disease, like those affecting the bile ducts of the liver, can similarly involve AMAs. Primary biliary cholangitis and primary sclerosing cholangitis are two such diseases that are characterized by different forms of autoantibodies. Sclerosing cholangitis, endured by the great NFL running back Walter Payton, is associated with antinuclear antibodies. On the other hand, biliary cholangitis sufferers have AMAs against the lipoate containing the E2 subunit of the pyruvate dehydrogenase complex. Additionally, they often also have antibodies to enzymes like sulfite oxidase and glycogen phosphorylase that are commonly associated to liver mitochondria.

At this point in time, it is not known exactly how and where these particular kinds of antibodies are made. The immunogenic E2 subunit normally floats inside the mitochondrial matrix along with the mtDNA and does not habitually escape through any channels. Presumably, errant pieces of degraded mitochondria from expiring cells could be contributing to antibody formation, as could whole mitochondria purposively ejected from cells.

One glaring problem in trying to understand the generation of AMAs that we have overlooked here so far is how the mtDNA gets past the inner membrane to reach the outer membrane VDAC. I asked Peggy Crow, the author of the accompanying opinion piece to the main article, to comment on research in this area. She notes that although the exact answer is not known, imaging studies have revealed another pore system that acts much in parallel to VDAC. These so-called “BAK/BAX macropores’ permit the inner mitochondrial membrane to herniate into the cytosol, permeabilize, and ferry matrix components, including mtDNA.

We haven’t yet said much about the reactive oxygen species component of mitochondrial inflammation mentioned above. There is another recent finding that ties together oligomerization of the VDAC1 channel and ROS. More specifically, the authors of the study found that a molecule known as lipoxstatin-1 protects cells against ROS damage by reducing VDA1 and restoring levels of the enzyme GPX4.

GPX4 is a unique selenium-utilizing form of glutathione peroxidase that specifically protects cytosolic membrane lipids from oxidative damage. When GPX4 is compromised, a unique form of apoptosis known as ferroptosis occurs throughout the cell. By blocking oligomerization of VDAC1, and not VDAC2 or 3, liproxstatin-1 was found to short circuit the ferroptosis pathway.