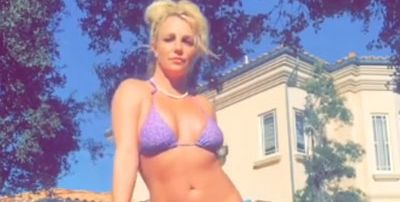 Some things change with the new year, but apparently, not Britney Spears doing yoga in a bikini. Brit is back at her go-to exercise in a new Instagram video that showcases her doing some yoga stretches in a sparkly purple bikini. The pop star said in the video that she was doing yoga to “open up my back and my chest” before she went through a series of moves like the total pro she’s fast becoming.

And in the caption, Britney shared that she plans to do “a lot more acro yoga and the basics for yoga” in 2020. “I’m a beginner and it’s kind of hard to let go…. learning to trust and letting someone else hold your body 😳 !!!” she said. “I have a lot of things I keep bottled up so I have to keep my body moving !!!!”

Britney said she’s also big on getting moving outside. “Thank God for Mother Nature…. she’s really no joke…. she grounds me and helps me find my feet and always opens my mind when I step outside…. !!!!” she continued in the caption. Apparently, Britney wasn’t ~just~ ringing in the New Year with some yoga. She also said she “ran a 6.8 speed outside my house for a 100 meter yard dash” and was all kinds of excited given that she ran at a six speed in high school. “I hope you all have a wonderful new year and GOD SPEED !!!!!” she wrote.

Oh and, for the record, Britney is well aware that you caught her wearing sneakers while doing yoga in a bikini. “I’m so cool with my tennis shoes and yoga. It’s the new thing you know,” she joked.

ICYMI, Britney has a solid history of doing yoga in a bikini. In late October, she busted out some acro yoga with her boyfriend Sam Asghari. And in May, she showed off some impressive moves in another Instagram video while wearing an animal print bikini.

So, who knows what new stretches she’ll have in store for 2020?