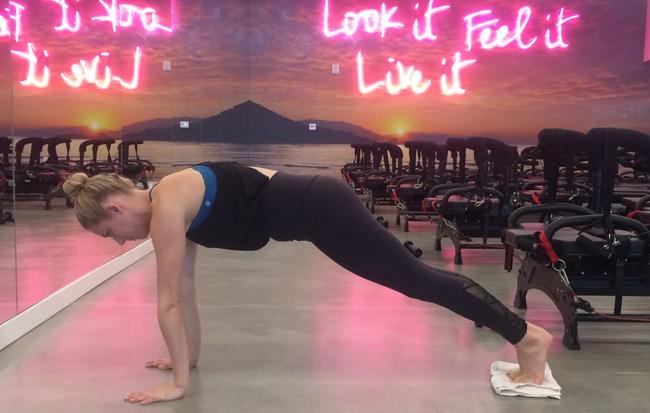 When you think of a Pilates workout, odds are the phrases “sweat fest” and “calorie-blasting” don’t exactly come to mind. Sure, traditional Pilates exercises may not torch as many calories as, say, power walking or spinning class.

Yet there are some Pilates-inspired moves that will wow you in terms of how many calories they burn, says Erika Rae Defrates, an instructor at The Studio (MDR), a Lagree method fitness studio in Los Angeles. “When it comes to burning calories, you want exercises that target multiple muscle groups at once,” says Defrates. “The moves here also utilise small muscle groups that most of us don’t access on a regular basis, which prompts the body to work harder and the heart rate to rise, which burns more calories as a result.”

Here, Defrates shares 5 calorie-blasting moves you can do at home—no Pilates reformer necessary. So, clear some space on a hardwood or tile floor, grab a towel, and start sweating.

Come to plank position on hands and feet, with balls of feet on a towel. Keep feet together and squeeze inner thighs, glutes, and lower abs. Inhale, and on an exhale, lift from lower abs to draw feet toward hands, bringing hips toward “pike” position. Keep feet glued together and continue to squeeze inner thighs, glutes, and abs. Also, keep shoulder blades pulled down back, avoiding “shrugged” position. On inhale, slide feet back to starting position and do a push-up.

“Really take your time when you’re doing this move,” says Defrates. “When I teach this, I cue my clients to pull their feet up into a pike position for a slow count of 4, and then come back down to the starting position for the same count of 4,” she says. Repeat for 1 minute, which should be about 6 repetitions total.

Come to same set-up position as plank-to-pike, but rather than piking hips up, pull knees in toward chest while not moving upper body from its plank position. Keep shoulders pulled down back and count to 4, then press feet back out to starting position and do a push-up. “As your legs are coming back out, it can be easy to lose the abdominal contraction, so keep that in mind and continue to hold the contraction,” says Defrates. Repeat for 1 minute, which should be about 6 reps.

Start in same position as bear. This time, instead of pulling knees in toward center, twist hips to bring right knee toward left elbow for a count of 4, then push feet back to starting position and do a push-up. Repeat on other side, pulling left knee in toward right elbow. “Be sure to keep hips at shoulder level as you do this,” says Defrates. “It can be tempting to let them drop lower than shoulder height or pull them up too high.” Also, keep squeezing your knees together and keep your upper body squared to the front wall, which will help ensure you’re activating the most muscles possible. “This move really hits the obliques while also toning the muscles in lower back and upper body,” says Defrates. Repeat for 1 minute.

Come to plank position on hands and feet, with feet resting on top of towel. Cross right foot over left, then pivot toes toward left wall so you’re on sides of both feet. Keep shoulders squared to front wall as you raise hips and drag feet in toward pike position. Push feet back out to starting position and repeat for 1 minute. Again, keep these movements slow, piking up for a count of 4 on an exhale and coming down for a count of 4 on your inhale. “It can be tempting to let your shoulders drop during this move, so be sure to keep your upper body in place,” says Defrates. “It’s also crucial to squeeze inner thighs while you’re piking up.” When you’re finished, do the same thing on the right side for 1 minute.

Come to low squat position with towel under right foot, holding onto back of a chair if you feel off-balance. Be sure knees are in line with ankles, not forward or behind them, and that there’s a slight arch in lower back. Keeping left leg bent, press right leg out straight to right. You should feel outer thighs and glutes turn on. Then, pull foot back in to starting squat position, using inner thighs to pull foot in slowly. “It can be tempting to shift your knee in front of your ankle on the stationary leg, so keep that in mind to keep good form as you do this move,” says Defrates. If you don’t need a chair for balance, take both ends of your towel in your hands and hold it overhead. “Try to pull the ends as if you were going to rip the towel, which will activate your upper body and increase the calorie burn,” she says. Repeat on the right side for 1 minute, and then switch sides and do this move on the left side for 1 minute.