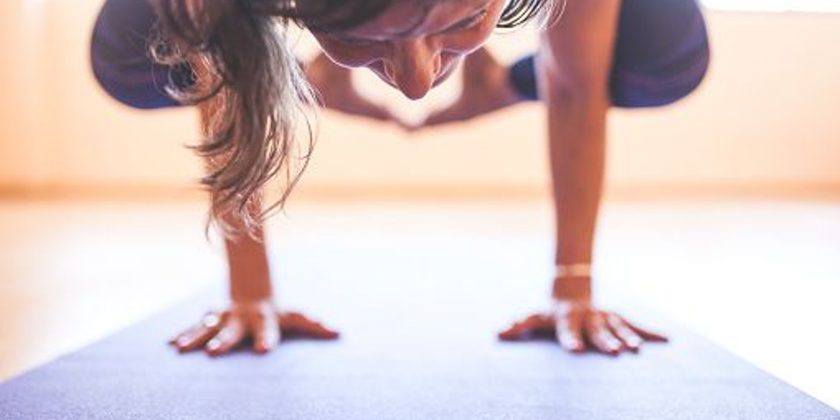 When you don’t know how to do them, handstands can seem impossible. So, how long does it take to learn that kind of inversion? Writer Harriet Prior set herself a 30-day challenge to see if a month was long enough to go upside down.

As a self-confessed yoga superfan for more than six years, I’m still guilty of skipping over parts of practice that aren’t my strong point. I applaud those who can seamlessly transition from splits and crow pose to headstands with ease, but becoming an inversion-fluent yogi remained a distant dream for me.

However, with the Olympics offering a rare chance to watch the best gymnasts in the world at work, I felt inspired. Sure, I’d never reach the heights of Simone Biles, but everyone has to start somewhere – and what better place to begin than trying to nail a handstand?

6 important pieces of advice for new gym-goers, if the Olympics has inspired you to train

After a little research, I discovered a 31-day programme on yoga app Alo Moves designed specifically for those looking to achieve their first handstand. I felt doubtful at my chances of success, particularly considering I hadn’t done any form of gymnastics in 15 years, but there were plenty of reasons to give it a go beyond feeling smug in a yoga class.

“Handstands are super beneficial for more reasons than you might think,” Lucy Arnold, personal trainer and founder of Lucy Locket Loves, tells Stylist. “It works all the intricate muscles in the shoulders and upper arms that may not get the same kind of attention in regular weight workouts.” Handstand practice can also improve your balance, increase circulation and lymphatic flow.

Would it really be possible to achieve all of that in just a month, though? “It is possible to learn to handstand in a month – even in just a few weeks if you’re super determined,” Arnold reassured me. “It just takes the right amount of determination to do it.”

The programme consisted of 31 short workouts, which became progressively more difficult as the month wore on and were designed to help make you feel comfortable and confident upside down. Here’s what happened when I tried it for myself.

Holy abs! I know that core strength is said to be the key to overall stability, but the number of plank variations I completed in the first five days seemed excessive. The focus, so my virtual trainers tell me, was on strengthening the wrists.   Despite the fact that my hands hurt while typing this, the first five workouts were a perfect introduction to handstand practice. With the help of primal movements, such as floating from a squat into a kind of bear crawl, I was gradually learning how to shift my weight forward.

I have certainly discovered muscles I didn’t know existed, and it’s become clear that nailing a handstand is about building full-body strength. Flinging yourself into the air and hoping you don’t come crashing down isn’t the best tactic (apparently).

The fifth day brings with it the first foray into handstanding. With the help of the wall, I managed my first handstand variation of the month, with one leg perpendicular to the wall.

The next five days incorporated elements of yoga and stretching, which were welcome as my shoulders were beginning to burn.

It was all going well until day eight, when the challenge began to feel unattainable for the first time. I find crow pose challenging at the best of times, but throw in quick transitions between crow variations and push-ups, and my body can’t keep up. Despite knowing that finding this period difficult wouldn’t significantly impact the end goal, it still felt like a blow.

Plus, I was starting to feel like the only yogi who had never heard of Lolasana, a pose designed to strengthen the wrists, arms and shoulders that involves crossing your legs and balancing on your hands. It was tough, but both my shoulder and core strength were coming on leaps and bounds, and I was confident that this would help me achieve my end goal.

Handstands aren’t about shoulder strength – turns out, you need serious full-body strength to get up… and stay up.

Ten days in and the programme was finally starting to integrate full handstands. Unlike in plank pose, when you’re encouraged to look between your hands, the challenge with handstands is getting used to your weight being over your shoulders.

After a few days of incorporating blocks to open the shoulders, build stability and increase grip strength, I felt like we were getting to the business end. Now’s probably not the best time to admit that I am absolutely petrified of handstands; when it was time to add momentum and to do full handstands against the wall, the biggest challenge was finding enough confidence to kick myself up. I live in a rented flat, so the fear of breaking the wall was real.

The first few attempts failed, so I used a friend to guide me as I literally and metaphorically found my feet. After a few assisted tries, I finally managed it without a safety net and the wall is still intact.

Doing the splits was absolutely not what I signed up for. Apparently, though, good mobility in the hip flexors and hamstrings is vital to handstand success. I can’t fault this challenge for constantly switching things up and keeping things interesting, from practising splits one day to sock drags the next.

While some workouts had been challenging, the biggest test yet arrived on the 20th day: a 40-second handstand at the wall. In the first round, I barely managed 15 seconds before collapsing into a ball on the floor and psyching myself out. After numerous attempts, however, I gradually built up my strength to the point that I could get up and stay up. Dare I say I was finally getting used to being upside down?

40-second wall handstands are tougher than they look!

Just when you think you’re getting comfortable, a push-up challenge was thrown in the mix. It felt unfair, considering the hit my shoulders were taking; however, it’s important not to shy away from difficult things.

Then, just when I thought it couldn’t get any more difficult, the challenge threw in tuck hops to handstands. The course gives you the time, space and instruction on how to do tuck handstand hops both with and without the wall. In all honesty, I failed miserably on both counts.

On a positive note, with the wall still very much my best friend, I was managing to hold my handstands for longer and with better form. I worried that the challenge was getting a bit out of reach.

My first injury of the month came on day 30. As I went to kick up from a downward dog into a handstand, my left arm buckled and I came tumbling down. The worst thing was, it was all caught on camera. The video footage remains strictly for my eyes only, but the bruises are there for everyone to see.

With the programme incorporating handstands in flow without the wall as a backup, I struggled to shift the weight sufficiently and avoid looking like a banana. I’m unsure whether it’s my ability, confidence or a combination of both holding me back, but the fall certainly didn’t help. I completed three more handstands to end on a positive note and decided to call the challenge a day.

My first tumble came on day 30 – but I did make it into an unaided handstand!

Is a month long enough to learn to handstand?

So, how did the challenge end? Well, I’m now able to do 40-second handstands against a wall and I’m managing to kick up and get a little air time on the floor. Both my arm and ab strength have come on leaps and bounds, too.

The past month has taught me much more than just a single skill. “Even if you can’t get it like an Olympian, to say you’ve put your focus on one goal is beneficial in other areas of your life too – not just exercise,” affirms Arnold. “To challenge yourself to do something you never thought you could do has the greatest payoff in the feeling you get once you’ve achieved it.”

Admittedly, nailing a handstand might take a little more practice (after I’ve recovered from the fall), but I have proven to myself that with the right balance of skill and diligence, you can achieve anything you set your mind to. It’s not about the destination, it’s about the journey. If that’s not a mantra to live by, I don’t know what is.

Increase your strength, ready to nail those tricky handstands, by having a go at the intermediate strength training plan on the Strong Women Training Club.