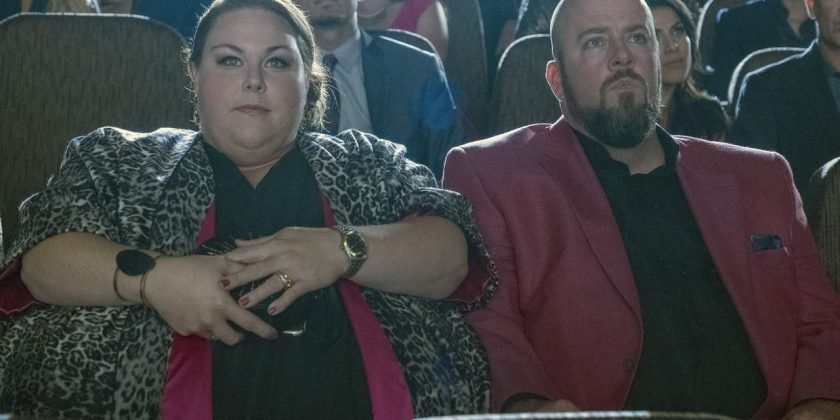 Last night’s notably low-key episode of This Is Us spent most of its hour focused on the Pearson siblings finding their places in the world—both in the present and in the immediate aftermath of Jack’s death.

Getting by in those first few months without Jack is particularly hard on Rebecca, who admits to Randall that she’s struggling to find the energy to get out of bed, let alone parent her teenage triplets.

But it’s present-day Toby who may be facing the most pressing mental health concern. After a fertility doctor mentioned that his antidepressants could be contributing to the difficulty he and Kate have had conceiving a child, Toby flushed his meds down the toilet, quitting cold turkey. We see Toby looking up “antidepressant withdrawal” on his phone as it becomes clear that it hasn’t taken long for him to see the ramifications of this brash action.

Throughout last night’s episode, we see a side of Toby we haven’t before. He’s jittery, constantly bouncing his leg up and down. He’s a little rougher around the edges, especially when the chatty Pearsons start arguing. “Everybody just shut up!” Toby shouts moments before the group is set to leave for Kevin’s movie premiere. “For the love of God, save the asinine commentary for the cheap seats.”

Antidepressant withdrawal—also called antidepressant discontinuation syndrome—can legitimately cause symptoms if people stop taking their meds abruptly. No one knows exactly why, explains Philip R. Muskin, MD, secretary of the American Psychiatric Association and professor of psychiatry at New York Presbyterian/Columbia University Medical Center. “But we think the body makes adjustments to the biological effect of the medication. If stopped suddenly, those adjustments now cause physical or psychological effects.”

Antidepressant withdrawal symptoms can include irritability, anxiety, and feeling like you have the flu, he says. Some patients also describe feeling “electric shock” sensations and gastrointestinal issues, he adds. According to a recent UK review of 14 studies, as many as half of people taking antidepressants will have some withdrawal symptoms when they stop taking them or lower the dose of their meds. And half of those folks—amounting to millions, the BBC reported—will rate those symptoms as severe.

While this can certainly be uncomfortable, discontinuation syndrome isn’t dangerous, Dr. Muskin says. But what can be, if a person suddenly stops taking their medication, is a relapse of the depression, he adds. For that reason, mental health professionals usually counsel patients to gradually cut back a medication over a period of weeks or even months if they’re stopping or changing treatment.

Certain antidepressants are more likely to cause symptoms when you quit taking them than others; depending on what a person is taking, they may be prescribed a different med for the short-term to ease any symptoms when coming off of a drug, according to the Mayo Clinic.

Toby, it’s worth reinforcing, took matters into his own hands here—and he is potentially putting himself in danger by doing so. In an ideal world, when the fertility doctor planted this idea in his head that his antidepressants are keeping him from becoming a father, she would have also “stated that Toby should not stop his medication without talking to his doctor first,” Dr. Muskin emphasizes.

Not only has Toby not told his doctor he’s quit his meds, he hasn’t even told Kate. After the outburst, Toby leaves to clear his head, and he doesn’t turn up again until it’s just about time for Kevin’s movie to start. “I’ve never seen you blow up like that–ever,” Kate says. “What’s going on with you lately?”

Toby shrugs it off as jet lag. Luckily, antidepressant withdrawal typically only last a few weeks, according to the Mayo Clinic—but we’re hoping it won’t get worse before it gets better.