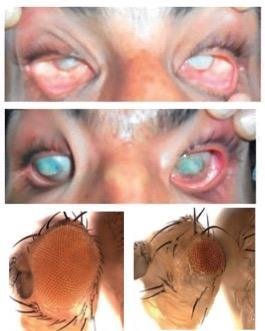 The human genome is made up of 20,000 genes, all of which may cause disease. At present, 4,141 genes have been identified as being responsible for genetic abnormalities, leaving around 16,000 genes with unknown implication in disease. Researchers from the University of Geneva (UNIGE), Switzerland, working in collaboration with scientists from Pakistan and the USA, have investigated a recessive genetic disorder that prevents the eyes from developing and results in childhood blindness.

After analysing the genomes of each member of a consanguineous family with affected children, the geneticists pinpointed pathogenic mutations in a new gene, MARK3, as the cause. They subsequently confirmed their findings, published in the journal Human Molecular Genetics, by modifying the homologous gene in drosophila flies, which resulted in abnormal eye development and blindness. The identification of the MARK3-related disease will help researchers to understand the mechanism of the disease, provide diagnostic services, and initiate efforts for a personalized treatment.

Monogenic genetic disorders fall into two main categories: the first – so-called dominant disorders –only need one copy of the gene to be mutated to cause disorders such as Huntington’s disease. The second – recessive disorders – are triggered by a mutation on both copies of the gene, as is the case with cystic fibrosis. “In our attempts to uncover new recessive genetic disorders, we looked at families where there was consanguineous marriage and where both parents carried one copy the mutant gene and passed it on to the child,” explains Stylianos Antonarakis, a professor Emeritus in UNIGE’s Faculty of Medicine. Supported by the the ProVisu Foundation of Geneva, the Geneva-based geneticists then joined forces with Liaquat University in Pakistan, a country where over 50 percent of marriages take place between close relatives (usually first cousins).

An unknown disorder that destroys eyesight

The geneticists directed their interest at an unknown illness that prevents the eyes from developing properly and gradually destroys them. “We found that the disorder was present in children from consanguineous parents. As a result, we hypothesised that it was a recessive genetic disorder,” continues professor Antonarakis. For a disorder to fall into this category, it must affect at least two children from the same family (regardless of their sex) and the parents must be in good health.

Two hundred Pakistani families that fulfilled these criteria were selected for the research programme. “We started by sequencing the genomes of every member of a family that had three children with the genetic abnormality and two healthy children. The aim was to see which gene had mutations on two copies in the affected children, on one copy in the parents, and one or zero copies in the normal siblings,” says Muhammad Ansar, a researcher in the Department of Genetic Medicine and Development at UNIGE. After carrying out a bio-informatic analysis and genetic segregation to look for the mutations of each gene in the healthy and affected children and their parents, the scientists isolated the MARK3 gene as responsible for the recessive disorder.

Confirming the result with drosophilae

“To confirm whether MARK3 really was the gene responsible for the blindness, we checked to see if a similar mutation in drosophilae led to the same eye abnormalities,” says Ansar. The UNIGE researchers have collaborated with experts at Houston’s Baylor College of Medicine, to genetically modify drosophilae by introducing the mutation of two copies in the MARK3 gene of the flies. The result was that the flies had undeveloped eyes, and they were blind very similarly to the affected children in the Pakistani family. These results provided a validation of the the research findings in human patients.

This discovery means that a new recessive disorder can be accurately diagnosed. “We can now concentrate on studying the mechanisms behind the disorder with the aim of finding a treatment,” says Antonarakis. It is also possible to perform a quick and inexpensive test on people in the same extended family to determine whether or not they will pass on the mutant gene for this eye disorder to their children and, in some cases, so they can avoid marriage among carriers of the pathogenic gene mutation.