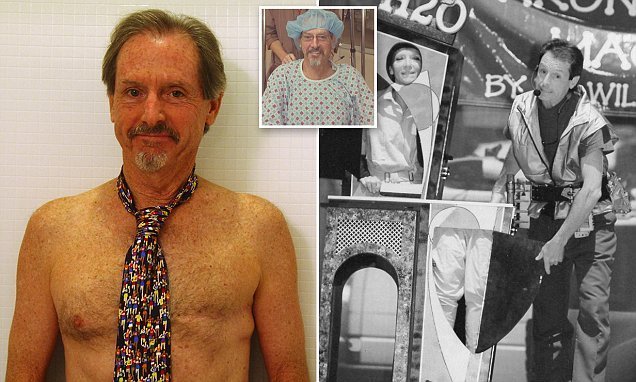 ‘I had no clue men could get breast cancer’: Magician, 68, shares his solitary journey with the disease after finding a tiny bump on his chest

As a magician, Khevin Barnes made a profession out of the unexpected, but before he retired, his job was to be in the know, and surprise others.

Khevin didn’t know that men could get breast cancer.

Then he found himself getting a mammogram, and then a mastectomy.

A four-year survivor of the disease, Khevin, now 68, has made a life of alerting fellow men that breast cancer is not just for women. 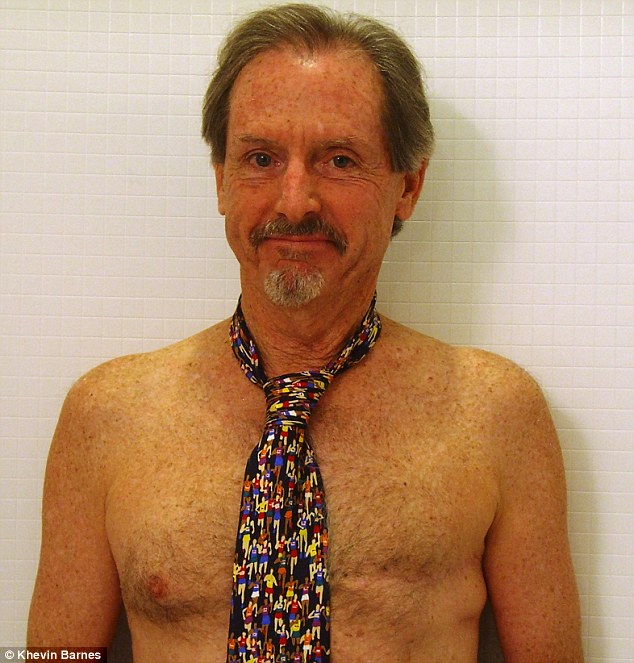 Khevin Barnes had a mastectomy to remove the tissue from the left side of his chest  in 2014 after discovering that he had breast cancer, which affects just one in every 1,000 men

In 2014, he had a ‘bump’ at the left side of his chest. Even today, while most women refer to palpable tumors as ‘lumps,’ Khevin uses different language.

He didn’t see anything to worry about, though. He and his wife were living at a Zen Center in Honolulu, Hawaii, where they spent their days meditating and practicing a peaceful, substance-free lifestyle as part of an extended residency program.

Khevin had retired, but got a new health insurance plan, so he figured he should do his due diligence and see his primary care doctor.

‘Everything looked fine, everything seemed fine, and I thought, “I’m fine,”‘ Kevin says. 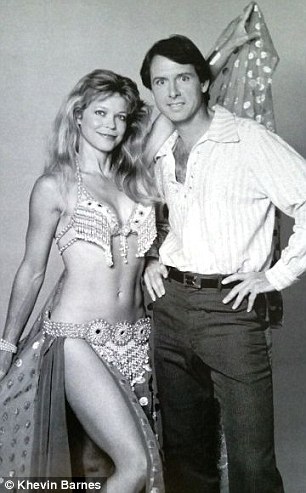 ‘But my wife, bless her heart, she said “why don’t you have him check that little bump on your left breast?”‘

Khevin had complained to her just a couple of times about the spot. The ‘little tiny bump’ was nothing horrible, just a bit bothersome.

But soon he was scheduled for a mammogram, a procedure he’d never fathomed going through.

On Mother’s Day, while Khevin was visiting his mother who was ailing after breaking her hip, he got a voicemail that sounded scripted from a movie no one would want to star in.

‘I’m sorry but I have a bit of bad news,’ his doctor said.

When he returned her call, the doctor informed Khevin that had breast cancer, stage one, but grade three, which meant that they had caught the cancer early, but that it was an aggressive form.

That early diagnosis would be key to Khevin’s survival, and is particularly rare among men.

‘The reason that most men are diagnosed at a much later stage – usually three or four – is that guys are kind of wimpy, they get a little bump and think it’s something else. A lot of times, it’s the significant others that say to go get it checked,’ he told Daily Mail Online.

‘We’re kind of the last ones to get concerned,’ he added. 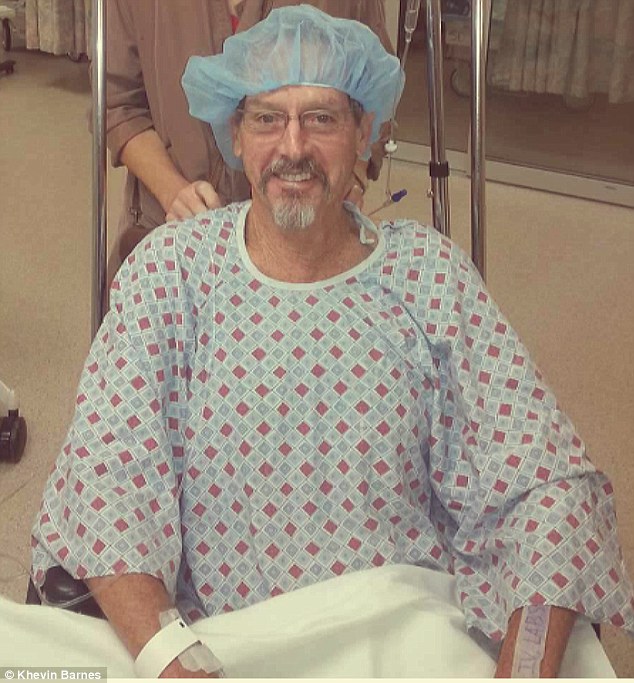 Less than 30 days after his diagnosis, Khevin was taken into surgery to remove his breast tumor and the surrounding tissue in 2014 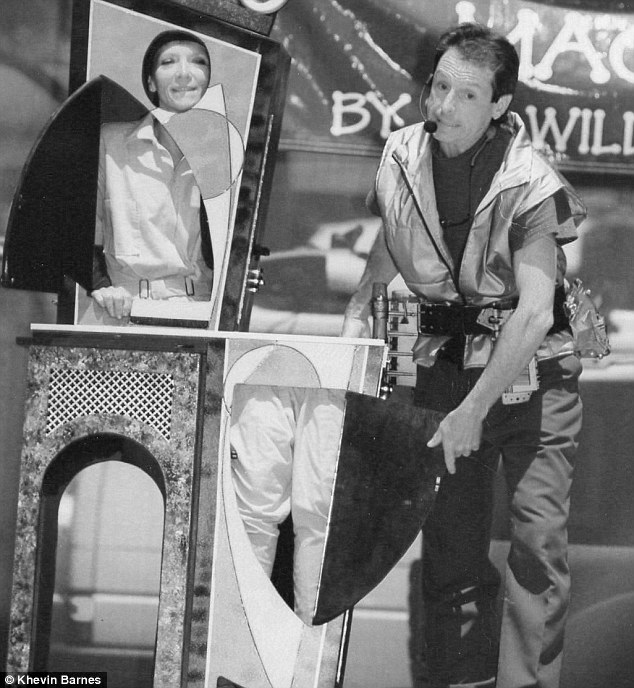 His wife, Gaga Barnes (left) assisted Khevin (right) with magic performances. She was also the one to convince him to have a doctor check the lump that turned out to be cancer

His doctor told Khevin to focus on his time with his mother, and not worry until he was back in Hawaii.

‘On the plane home, it hit me: I have male breast cancer,’ Khevin recalls. It was difficult to wrap his head around the idea of fighting for his life against a disease it had never occurred to him to fear.

Nonetheless, Khevin and his medical team wasted no time once he was back in Hawaii. He was fast-tracked for a mastectomy and left with precious little tissue and no nipple on the left side of his chest.

Typically, the next stage in treating breast cancer would have been chemotherapy, but Khevin already knew that the full treatment was not for him.

Seven years prior, his first wife, Meg Chrysler Barnes had died of ovarian cancer at just 47 years old and in spite of chemo.

For three years leading up to her death, Khevin was Meg’s constant caretaker as treatment after treatment failed to restore her health.

‘I watched the whole process and she often said she wished she hadn’t done [chemo],’ Khevin says.

So he did one round, a single quick blast of chemo to his body and tried to move on with his life. 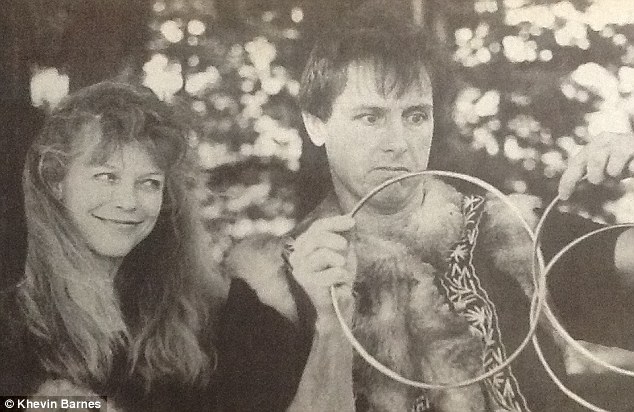 His late wife, Meg (left), accompanied Khevin (right, performing on tour in 1988) during his career as a magician before she was diagnosed with ovarian cancer 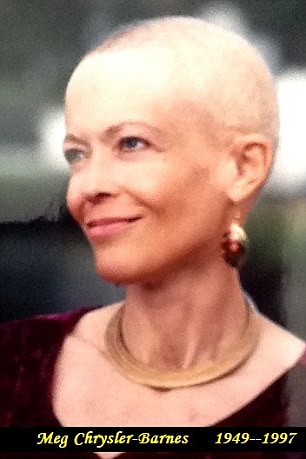 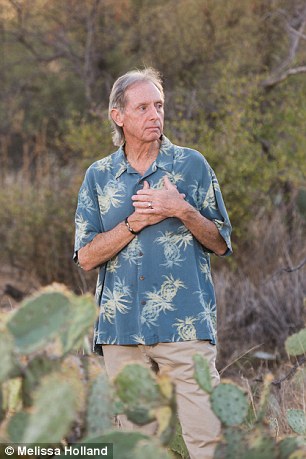 After a three-year battle with ovarian cancer and miserable round of chemotherapy, Meg died in 1997 at 47 years old (left). Khevin (right) knew he didn’t want to endure the same treatments

But his idyllic island home became a kind of symbol for his one-in-on-thousand diagnosis.

‘Being in Hawaii, I felt pretty isolated in general,’ Khevin says.

He and his wife, Gaga, moved back to the ‘main land’ and settled in Arizona, but, of course, there were no more men sharing Khevin’s experience there than there had been in Hawaii.

To stave off the loneliness of his diagnosis, Khevin started writing letters to family, friends and other cancer patients. He got involved in Anti-Cancer Club, and started writing about his experience on the support group’s site.

Soon, he was writing his own blog about male breast cancer, and then for CURE magazine, a publication about and for those living with cancer and their loved ones.

‘That is my passion now,’ Khevin says.

‘[Breast cancer] is a business – if you want to call it that – that a very big part of it is on the female side. The support from women has been amazing,’ he says, but ‘men have breasts and they can get breast cancer.’ 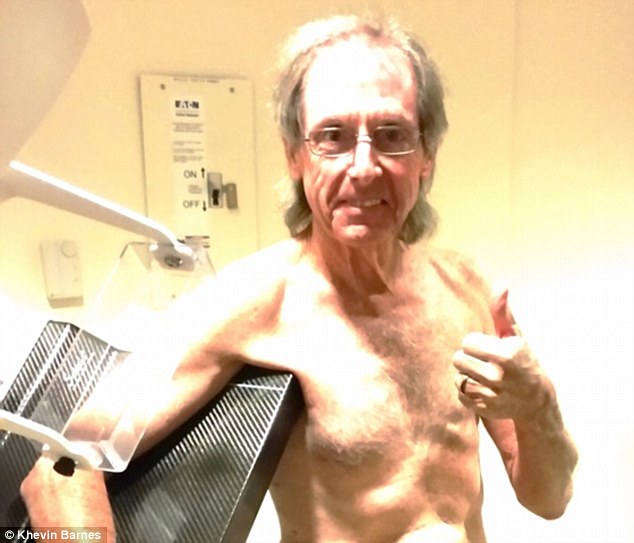 Khevin has been cancer and symptom free for four years, but gets mammograms twice a year

He’s made it his mission to be the symbol of men’s breast cancer – which many men are afraid to be – as well as an educator. He is even writing a musical about breast cancer.

‘A lot of men [who have had breast cancer] aren’t willing to pose with their shirts off, and we don’t have the same connection to breasts as women do, societally. It is pretty much over-looked even by doctors,’ Khevin says.

‘One of the things we need to do is educate practitioners. Men really don’t know how to tell men to check their breasts, so we’re approaching it from that end as well, reaching out to men and the professionals.’

Khevin checks his breast tissue in the shower, and gets mammograms twice a year.

‘I have an 80 percent chance of living probably 10 years if I do nothing. I’ve felt great for the last five years and been symptom free,’ Khevin says.

‘Even if the cancer recurred tomorrow, it’s been a good four years.’

But it might not have been if Gaga hadn’t been around to ask his doctor about that pea-sized lump.

‘Listen to your significant other, have stuff checked out. We’re so wimpy about needles and all, but, I’ll tell you what, it’s a lot better than a mastectomy,’ Khevin says.