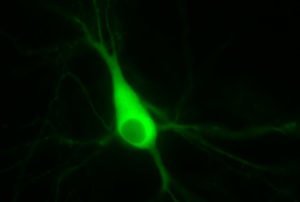 In 2017, an estimated 36.9 million people worldwide were living with HIV and only 59 percent of them were receiving antiretroviral therapy (ART). And while access to ART means that many people with HIV can live longer and healthier lives, as many as half of them still suffer from neurological diseases.

HIV-associated neurocognitive disorders can range from mild disorders that cause no symptoms to severe dementia.

“There’s always been more neurological problems in people infected with HIV for long periods of time, even with ART,” said Keira Sztukowski, a CSU student in the second year of the Doctor of Veterinary Medicine Program. “So even those that are living longer, better lives are still developing neurological diseases later in life.”

“As long as this has been going on, there hasn’t been a clear understanding of the mechanisms involved or of what’s actually happening inside the brain, so that’s where this project launched from,” Sztukowski said.

The study, recently published in the journal PLOS Biology, showed that FIV and HIV share a core cellular pathway that changes neuron activity, and identified a specific molecular pathway that occurs in HIV-associated neurological disorders. These novel and valuable findings could help the development of therapies designed to prevent neurological problems in people with HIV. It also shows that using FIV as a model is an effective way to study the mechanisms of HIV-associated neurological problems.

“Pieces of evidence were available before we completed this pathway, but we’re the first to put it all together,” said Seonil Kim, Sztukowski’s mentor on the project and an assistant professor in the Department of Biomedical Sciences whose lab studies different diseases, including Alzheimer’s and Autism.

Sztukowski previously earned a degree in molecular cellular developmental biology from the University of Colorado Boulder. There, she studied how pythons are able to eat such large meals at one time in a broader effort to better understand obesity in people. She plans to pursue a specialty veterinary career in research and radiology that will allow her to continue applying basic science to enhance human health.