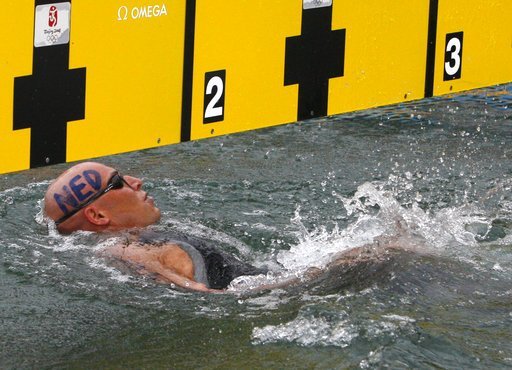 Maarten van der Weijden beat leukemia and went on to win an Olympic gold swimming medal in Beijing, but even his powers of endurance weren’t enough to complete his latest challenge.

Ill health on Monday forced Van der Weijden to halt his ambitious bid to swim the 200-kilometer (124-mile) route of an iconic speed skating race in the northern Netherlands, bringing to a premature end a fund-raising feat that had enthralled his home nation.

Van der Weijden had swum 163 kilometers (101 miles) since plunging into a canal in the northern city of Leeuwarden early Saturday morning.

Wearing an orange-and-black wetsuit and swimming a slow freestyle, the 37-year-old swimmer was cheered on by thousands of supporters lining river banks over the weekend. Tractors drove alongside him at night to illuminate the water and he was hoisted over canal locks by cranes.

He was attempting to swim along canals and rivers linking 11 towns in the northern province of Friesland that are used for a speed skating race in the years when cold winters freeze the entire route. The last such race was in 1997.

Supporters unable to get to Friesland followed his progress on a live stream by national broadcaster NOS.

Yet in a post on his official website, Van der Weijden’s team wrote Monday that a doctor who checked him considered it “irresponsible” to continue. The swimmer was suffering from an imbalance of salt and was unable to keep down any medicine due to nausea, according to his site. He was taken by ambulance to a hospital for checks.

Wrapped in a foil blanket, the skin on his hands wrinkled from the hours in the murky canals, Van der Weijden was treated on the river bank as supporters applauded his effort.

“It’s a huge disappointment,” Van der Weijden’s coach, Marcel van der Togt, told NOS. He said the swimmer fell asleep in the water and became sick when he was put on a floating bed to rest.

Van der Weijden became a household name in the Netherlands when he won the 10-kilometer open water swim at the 2008 Beijing Olympics. He became world champion over 25 kilometers (15.5 miles) later the same year and has since completed many long-distance charity swims to raise money for cancer research.