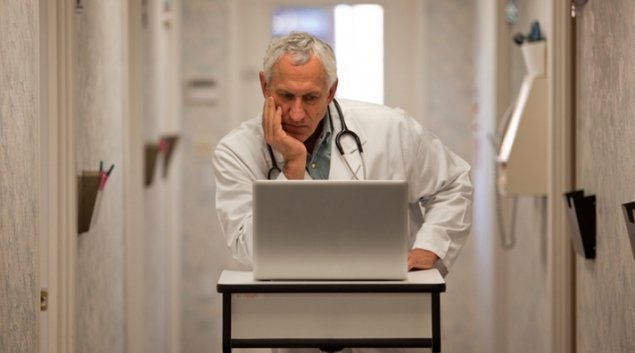 Physician burnout is an increasingly common issue in healthcare, and there are a lot of factors that can contribute to it. Long hours, paperwork and the burden of administrative tasks all play a part. But electronic medical records can also contribute to burnout, largely because each system is different. With disparate electronic health record systems comes an added hardship for physicians, affecting their work — and their reimbursement.

Compounding the issue is that many physicians are no longer limited to just one facility. Many handle rounds at multiple hospitals and/or practices, and if each has its own EMR system that doesn't necessarily communicate with the others, it can be a growing headache.

Niki Buchanan, general manager of population health management at Philips Health, said the lack of interoperability is taking a toll.

"What a physician might have in their physician care practice might be Athena, or an EMR customized to their workflow or a public-type vendor. When they go in to do rounding, it's usually an Epic or a Cerner, a large system. They have to deal with three or more EMR systems depending on how they're caring for their patients. If there is no standardization … then imagine the challenge of only having a few minutes for the patients and having to provide a full realm of care for them."

Indeed, physician burnout has become an increasingly widespread problem in healthcare. Earlier this year, a  Medscape National Report on Physician Burnout and Depression found that nearly two-thirds of U.S. physicians report feeling burned-out, depressed or both, with one in three admitting that their feelings of depression have an impact on how they relate to patients and colleagues.

The evolution of the patchwork EHR landscape has been complex, and Buchanan traces the genesis back to meaningful use.

"There were some positive intentions when meaningful use started," she said. "The HITECH Act was a good thing that happened for healthcare, but it didn't bring with it all of the standardization you should have in place. So for years and years, when the dollars were flowing into health systems to have them implement an EHR, the systems all had different business goals and things they were good at."

The overall intent, said Buchanan, was to be episodic in nature, documenting the care a given physician was going to provide or recommend that day. But without any standardized rules for how that documentation should be done, every EHR interpreted the meaningful use rules differently.

Eventual consolidation, a step on the road to true interoperability, may be the key. While Buchanan doesn't think consolidation would necessarily be great for physicians looking for a variety of payment models, it is starting to force the competitors to work together to find the right ways to get the right data in front of clinicians.

While true interoperability has yet to be attained, there are technologies out there, including Philips' own, that can allow disparate systems to communicate with one another — alleviating the pressure on physicians and allowing them to refocus on their core mission of patient care.

"We have capabilities now … to take some of the data we bring into our system and send that data back into the EMR so it can be recognized at the fingertips of the providers," said Buchanan. "We don't want them to have another system to work in. It's our obligation that if we're going to take the data and put it in a separate place, we have to serve it back up to them at the point of care."

The good news, this year in particular, is that CPT codes are being brought into the billing codes discussion, allowing them to demonstrate remote patient monitoring.

"If we can get CPT codes aligned into the system, that will certainly help," said Buchanan. "Until we can start reimbursing clinicians, it's very hard for them to change their clinical workflow and their model if there's nothing for them on the other side."