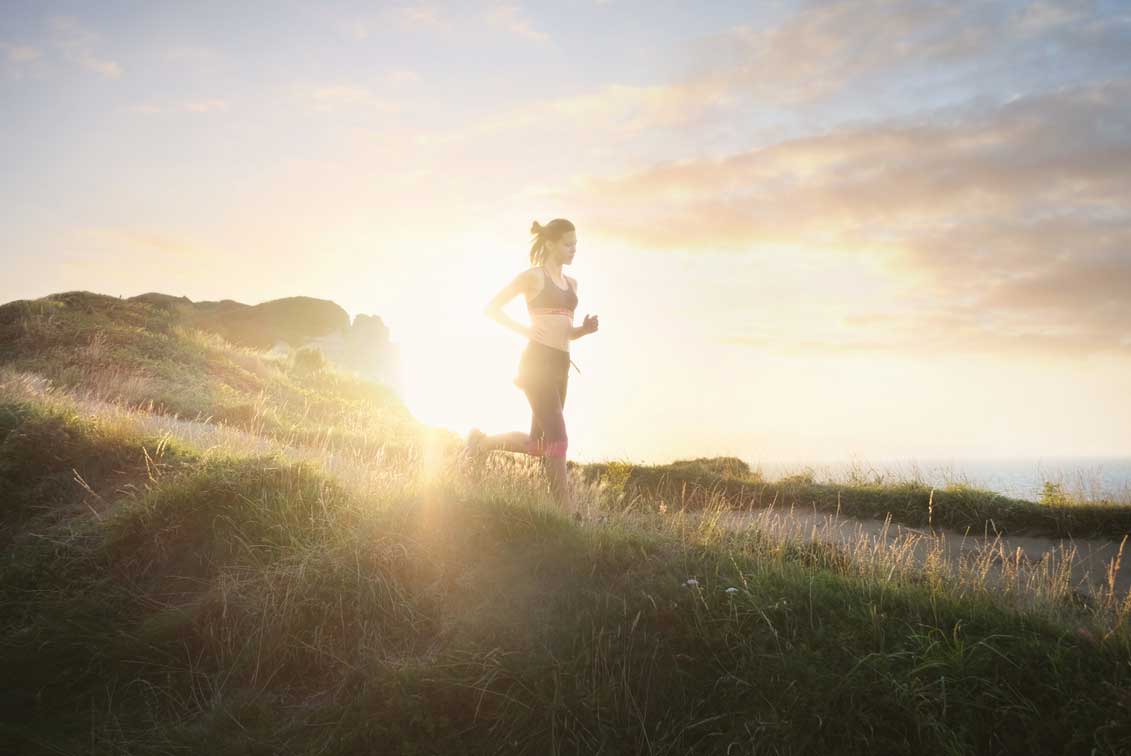 Though it goes counter to the preferred doctrine, I tend to thrive on less than eight hours of sleep. I’ve been a night owl most of my existence, and usually only get five to six hours of shuteye. But I’ve never really worried about it, because being productive in the morning has never been an issue, whether I’m doing chores around the home or getting in to the office early to get ahead.

But there’s one thing I’ve never been able to master because of this type of schedule: morning runs.

Any time I vowed to wake up, get a run in, telling myself I’d feel great the rest of the day, I would either turn off the alarm, or I’d groggily stumble out of bed an run the equivalent of “junk kms” during a crappy outing.

But lately, both work and my personal life have been conspiring against me, to make my typical routines crumble. I’m currently training for a marathon, and while I would normally schedule several days a week for lunch runs, my afternoons have been tied up with other tasks.

Sure, I could have tried running at night, but that is sacred late-night TV time—a guy needs to relax. No, if I wanted to get in my training, morning workouts were the only real option.

So I committed to trying to master the morning run for 15 days. The goal was to have all easy-day runs completed well before 8 a.m. (when I start work) and my weekend long runs to start no later than 7 a.m.

I was able to wake up every day from mid April until the end of the month, but the process wasn’t always easy. Along the way I learned what works for me, what doesn’t, and some little tricks that could be helpful for all runners.

That Little Problem of Waking Up

Unlike the “Upside Down” from Stranger Things, early mornings are not some unknown world that I have never experienced before. I’ve always done my weekend long runs early-ish, and during the past few marathon training cycles, the only time I could regularly plan my speedwork was on Thursday mornings starting at 6 a.m.

I’ve been doing these 6 a.m. workouts on a local running track for most of the year in cold conditions. It’s the type of weather where it feels difficult to really open up for a true hard workout. Oh, and the field lights were never on. But it was somehow lovely, and gratifying to finish these hard runs in the dark, in absolute solitude.

So “Thursday morning speed workouts” and “Saturday morning long runs?” No problem. But that’s because I spent time developing that habit. I feared that getting up Monday morning to do 6 kilometres knowing I had to do the same thing every other day that week would be more problematic.

To make this experiment work, I decided to mimic my Thursday morning routine for weekday runs, which meant setting my iPhone alarm clock to 5:01 a.m. (that minute makes a difference, mentally, so I don’t feel like I’m getting up quite as early) , with a backup alarm at 5:30 a.m. And I began my two week journey on a Thursday morning, hoping that my already-regular habit would carry me through the difficult adjustment. I started with a classic workout of 6 x 800 repeats (also known as Yasso 800s). It went swimmingly. It was a fantastic start.

What wasn’t so fantastic was the next morning. I didn’t do any prep the night before for a morning run, I mentally ignored the alarms, and I ended up waking in a panic and I throwing on some clothes for a 7 a.m. run. I spent a terrible 9 kilometres slogging through, and worrying about the day ahead.

So the mission became clear: each night before going to bed, I would plan out my run and route, put out workout clothes, and prep my lunch—and the coffeemaker if I wanted some for after the run. That way I wouldn’t need to make any of these decisions from the depths of a morning fog. Oh, and I needed to find a better way to make the alarm actually jolt me awake.

The last part was the trickiest. The only way I could mentally get past hitting the snooze button was by keeping a hand on my phone when I woke up. If I jumped into an app—my email, calendar, bank account, or morning newsletters—the stimulation and blue light was just enough to jumpstart my mind/body connection, and for me to swing my legs out of bed.

Figuring Out My Stomach

Being unfamiliar with constant morning runs meant I was also not so familiar with how my gut worked that early. This was especially true in the first few days of my morning-run venture. On each of those initial runs (besides the very first, where my body was familiar with doing speed workouts at that hour) I was interrupted mid-run by a frantic need to find a restroom or, let’s be honest, secluded spot out of view.

Luckily, there are plenty of resources at Runner’s World I could turn to to figure out the culprit.

Because everyone’s number 2 habits will be different, here are the main items that helped make my morning runs less panicky as I headed into my second week.

As simple as all of these sound, implementing them as I headed into the second week eased the tension on my mind and, in turn, belly. This allowed me to embrace the run more each day.

Fancy sky for this morning's run

One big stumbling block in the first week of this experiment was simply adjusting to how I felt trying to shake off the rust and head out the door immediately. The five minutes it took me to brush my teeth, put in my contacts, and get dressed for a run wasn’t enough to fully adjust to being up. Maybe my brain was starting to fire on all four cylinders, but my body wasn’t.

My knees and quads often felt stiff as I went out on what should have been an easy five to seven kilometre jaunt, and my legs felt like rusty pogo sticks jerking up and down over the road. I typically hit a 5:00 kilometre pace when I do my easy day lunch runs, but getting past the 8:00 minute mark became a real struggle.

After a few days, I came to the realization that this might not be the worst thing. A recent article recently spelled out the training qualities that often lead to Boston Marathon qualifying times for runners. One of my biggest takeaways? People who spend too much of their time training near that BQ-pace standard end up NOT qualifying in the end. However, when male runners saved their hard workouts (speed sessions or long tempo runs) at their goal pace or faster—about 15 percent of their total training—they had far more success.

So backing off my speedy pace actually wouldn’t be the worst thing in the world. With the ability to ignore the beeps of my Garmin, I noticed that I could take in my surroundings much better. There were breathtaking skies as the sun was rising overhead in the park situated near my home. A few times, in no rush, I ran in the dew on the morning grass, letting the wetness help clean off my shoes. That would never happen if I was trying hard during a lunch or evening run.

Those pleasant mornings helped remind me that not every run has to feel like a race. It also lead to bigger gains when I did want to have a great effort.

I had forgotten that when I do my Thursday speed workouts on the track, I am awake for at least 30 minutes driving to the stadium. Plus, I had learned to force myself to warmup for at least three kilometres before trying to hit my intended paces.

As I got through that first week waking up each morning, I settled into a 5 a.m. wake up schedule, getting out of bed by 5:15 and out the door after at least 30 minutes. Nothing was changing when it came to running near my normal training pace for anything but a speed effort.

For the biggest long run of my training cycle—35 kilometres on a Saturday morning where I wanted to run near my marathon goal pace of 4:55—I needed a new plan of action.

After reading about one bizarre way to train for the morning of a race—wake up, give yourself some time to sit around, grab a bite to eat, and get that final bathroom stop in—I decided to plan out one weekend long run just as I would for my race nearly a month out. For my scheduled 7 a.m. race, that meant rousing myself out of bed around 5 a.m., taking a quick shower, and getting a small breakfast of a bagel with peanut butter and banana. Along with taking some extra time to listen to a few minutes of my favorite running playlist, I was out the door by 7 a.m. with a focused mind and happy belly.

And I nailed this long outing, averaging a 4:50 pace—just over my intended marathon pace—for all 35 kilometres. Having the extra time to wake up and prep was a hidden X factor that I never thought would be so beneficial, and I kept to the same script two weeks later on another long run. (Here’s hoping it works the same on the day of the race.)

But there’s also the fact that my body—now more adapted to the routine—was starting to actually like these morning runs. If I wanted to run again at lunch or in the evening, I knew that I could. (And because most days were easy, it was never taxing on my legs.) This made my days less stressful overall, because if something came up that would normally keep me from a workout, I knew that I had already logged my kilometres.

I’m surprised to write this, but when the two weeks were over and the spring mornings brought a little more light each day, I still wanted to do most of my runs before 7 a.m.

What had I become?

Ready for a challenge? Sign up for The Sun-Herald City2Surf.