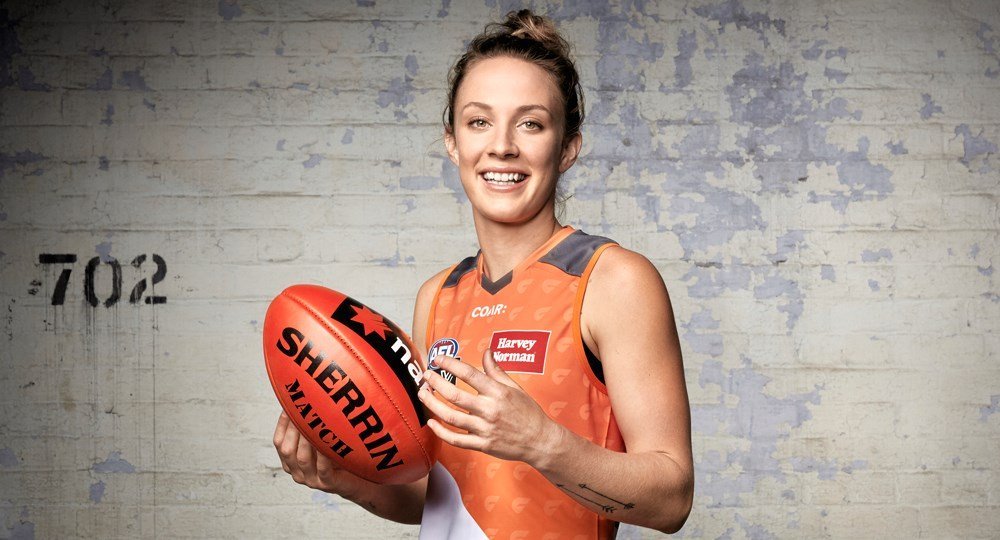 How did you start playing AFL?

“My brother started playing Auskick when he was about 5, so I would have been about 8 or 9 when I really wanted to play footy, and it took me a couple of years to make it happen. From what I can remember, I was probably that age group above Auskick, and there was probably one or two girls in the district in that competition. I wrote a letter to the local club [in WA] and said I wanted to play; they said [as a girl] I wasn’t allowed to. It took about half a season to actually be allowed to play. My dad played for the club and ended up convincing them to let me in. I played for half a year for the under 12s when I was 10 or 11 then gave up – being a girl playing with the boys, I didn’t really enjoy it too much, [I felt like] the outsider all the time. I went and played basketball for a few years. Then I found out about this four-week AFL pre-season comp that’s run in WA – I thought, that’d be perfect, maybe make me a bit tougher and fitter for basketball. But I just never went back and played basketball, I stayed with AFL.”

What appealed to you about AFL?

“I just always loved kicking the footy. We’ve got a big footballing family and I was kind of one of the boys growing up. In my head there wasn’t any reason why I was different to the boy I was sitting next to at school. I loved watching the men on TV, I always wanted to be an AFL footballer, and I was naive to the fact that there was a reason that couldn’t have been me. My cousin and I used to kick the ball and commentate to ourselves – he was Essendon and I was Freo, and we were versing each other for the Grand Final.”

How do you feel about the establishment of the AFL Women’s league?

“I obviously got to a stage where I was like, I was silly to think I could ever be an AFL player. And now it’s like, wow, it’s actually happened. Even 18 months ago, I wouldn’t have thought I’d be living in Sydney and playing AFL for GWS. Our [AFL Women’s] motto is “See what we create” – meaning there is no history; the boys are generally very stuck in tradition and what they ‘have’ to do, they can’t say this or they can say this. For the girls, there is no history, there’s no way this ‘has to be done’. We’re literally creating it ourselves. I think you’ll see in the media more personality from us girls – we can say a lot more, be ambassadors for a lot more, tell people our views, because there’s no tradition like the boys have. That’s going to be really exciting. It’s hard to comprehend, but I’m sure in 15 years time when there have been 3000 girls drafted to GWS, when I can say I was one of the first players, that’s probably when it will sink in.”

What do you love most about AFL?

“I love the camaraderie. I moved to Sydney and knew no one over here, and within the first two days I meet the team and I had 25 new best friends, that’s what it feels like. I’ve left friends and family at home but I don’t feel alone. We’ve got a pretty good set up with GWS – it’s probably the club with the most interstaters, so they’ve put us up in a duplex. Two houses next door to each other, both have five bedrooms, three bathrooms and it’s pretty much a big frat house. Pretty much fifty per cent of the team live together. So I love the family feel and the team environment, but also the physicality of the game.”

How does AFL enhance your fitness?

“It’s different to an endurance sport like marathon-running, but it’s also different to something like basketball where it’s short, sharp movements – you pretty much meet in between. It helps give you strength, you’ve obviously got to have a really good core, strong glutes, strong legs. It’s good for your mental fitness as well.”

What would you say to a woman toying with the idea of joining a team?

“They’ve got so many different programs for so many different people. If you want to go into a full-contact game of footy, there are women’s clubs around, most of the women’s leagues are broken down into different tiers. So you can go a do it socially, train one night a week, have a beer after a game. Or go on to an elite sort of level if you’re [good enough]. There’s also an AFL 9s program, it’s mixed gender, non-contact, fun, generally played through summer. It’s such a fun way of playing.”

“We do four nights a week, from about 6 to 8pm. That allows people to have jobs. We do everything from on-field sessions, to conditioning in the gym and also education, where we learn about the game, our structures and game plans.”

“In the morning I have a piece of multigrain toast with Vegemite, avocado and a poached egg. That’s probably my favourite meal. Before training I usually smash some peanut butter on celery. Yoghurt and muesli, all the cliche healthy foods.”

What do you do in your downtime?

“I’ve got a fishing boat, I like to go fishing. It’s only a 4.5m boat but we head out and catch some whiting and try and catch some tailor, usually crabbing in the summer. I’m from Mandurah, which is south of Perth and that’s a big fishing, crabbing, crayfish area.”