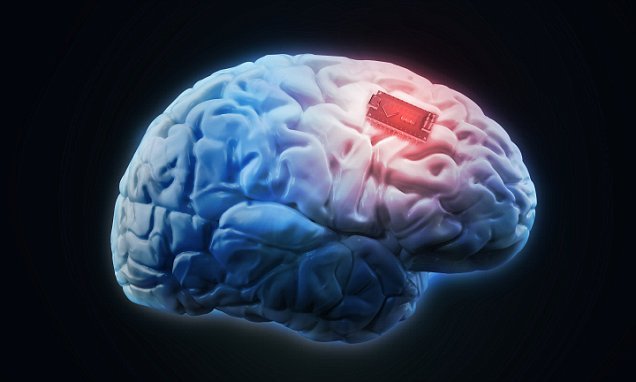 An electronic chip implanted in the brain has been used successfully to prevent epileptic fits.

The device can detect the ‘electric storm’ in the brain when a seizure starts and release a natural chemical to stop it.

Researchers led by the University of Cambridge were able to prevent seizures in mice, providing hope for the 600,000 people in Britain and 3.4 million in the US with epilepsy.

The electronic chip, made from plastic and twice as thick as a human hair, could be scaled up and trialled in humans within two years.

Currently three in ten people with epilepsy are not able to control their seizures as anti-epileptic drugs do not work for them. 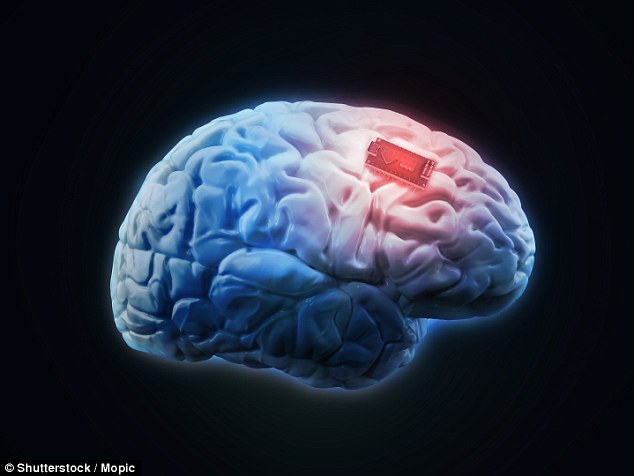 Dr Christopher Proctor, who led the research from the electrical engineering division of the University of Cambridge, said: ‘The most exciting day I’ve had in research so far was when a concept that I took from a drawing on paper to a real device that I could hold in my hand, prevented a seizure for the third time.

‘I say the third time because I am forever a sceptic, so I was hesitant to believe our initial results until we repeated it a couple times.’

Scientists have been competing to find a cure for epilepsy, which affects roughly one in 100 people, and have already developed implants which zap the brain with electricity to disrupt seizures.

The new chip works differently, using a chemical already found in the brain to block the brain cells which cause a seizure.

The implant detects the electrical signal created when a fit begins, triggering an ion pump using an electrical charge.

Playing music by Mozart could be a way to reduce epileptic fits in children.

Children aged two to 18 who listened to the classical composer’s music had a significant drop in epileptic activity in the brain, according to recent research from the Royal Hospital for Sick Children in Edinburgh.

Doctors who carried out the research, said music may offer a low cost anti-epileptic therapy for children, some of whom do not respond to current treatments.

The annual cost the NHS of anti-epileptic drugs is about £165 million.

In the study, 45 children listened to the first five minutes of the Sonata For Two Pianos In D Major, or to other music not by Mozart.

Electrical activity in their brains was measured and results showed a significant reduction in the frequency of epileptic discharges while listening to Mozart, but no change when listening to the control music.

Just how the sonata could have such an effect is unclear, but one theory is that Mozart’s music has a unique pattern of rhythms and melodic lines which affects electrical activity.

That pump releases the chemical called GABA, which stops the brain cells which cause a seizure from firing properly.

It was found to work in 17 mice, given drugs to cause fits before having their brain activity monitored using a device similar to an ECG.

Stopping a seizure required less than one per cent of the chemical loaded into the device, suggesting it could operate for long periods without needing to be refilled.

Professor George Malliaras, who worked on the soft, flexible chip from the University of Cambridge’s Department of Engineering, said: ‘These thin, organic films do minimal damage in the brain, and their electrical properties are well-suited for these types of applications.’

The results, reported in the journal Science Advances, could also be used to prevent tremors in people with Parkinson’s disease by using the chip to deliver a chemical called dopamine into their brains.

However the authors, also including École Nationale Supérieure des Mines and INSERM in France, stress the device is still several years away from routine use in people.

Professor Ley Sander, medical director at Epilepsy Society and professor of neurology at University College London, described stopping seizures before they happen as the ‘holy grail’ of epilepsy management.

He said: ‘What is interesting about this research is that the implant delivers a drug straight to the source of the seizure, minimising the amount of drug required, reducing the uptake time and potentially reducing the risk of side effects.’

But he added: ‘I would still tread cautiously however. Although researchers say the drug is a neurotransmitter that is native to the body, epilepsy is a diverse condition and its many seizure types remain defiantly resistant to any ‘one-size-fits-all’ panacea.’