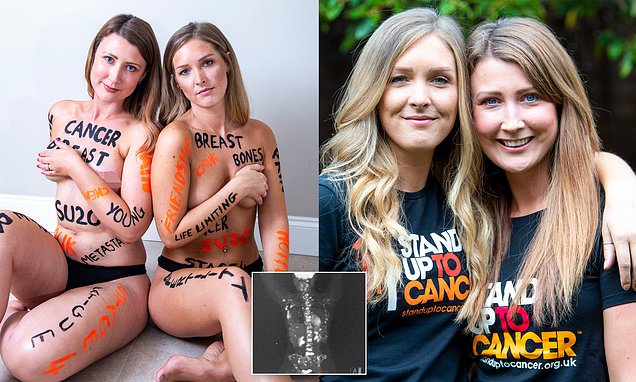 The write stuff: Two friends, 31, support each other during cancer fight and pose for photo with words that characterise their battle daubed on their bodies as part of Stand Up To Cancer campaign

Two breast cancer sufferers have forged a ‘sister-like’ bond through their shared devastation at not being able to have children.

Nicky Newman and Laura Middleton-Hughes, both 31, were distraught when they found out their dream of starting a family had been snatched from them.

But Mrs Newman, from Guildford, Surrey and Mrs Middleton-Hughes, from Norwich, have vowed to live life to the full together after finding friendship with each other.

Although both women look fit and healthy, X-ray images lay bare the ‘secondary’ tumours which riddle their bodies. 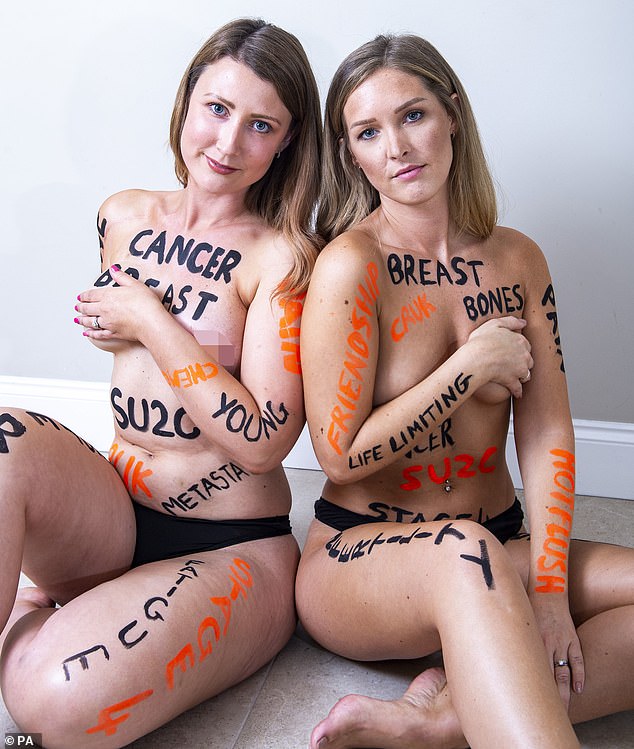 As part of the Stand Up To Cancer campaign, both women have painted their bodies with words which characterise their battle with cancer, including ‘pain’, ‘infertility’, ‘fatigue’ and ‘stage 4’ 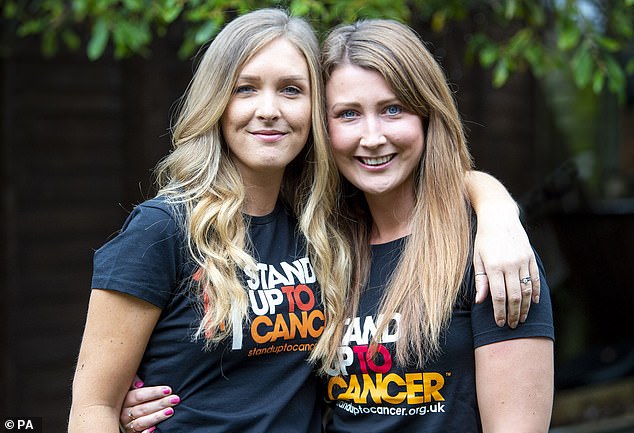 Nicky Newman (left) and Laura Middleton-Hughes, both 31, were distraught to each find out their dream of starting a family had been snatched from them

Mrs Newman and Mrs Middleton-Hughes met by chance, through an online cancer community and bonded immediately.

Soon after, they set up their own web platform called Secondary Sisters to ‘offer information, hope and basically a bit of fun’.

Mrs Newman discovered she had cancer about a year ago, after noticing a lump in her right breast.

At the time, she was undergoing IVF in a desperate bid to have a baby with husband Alex.

She said: ‘I’ve always been a “lumpy” person so I wasn’t worried. I talked to the IVF nurse and she said it was probably just a side-effect of the treatment.

‘But a week later, there was an indentation in the breast and the nipple had gone in. I called the nurse again and she told me not to worry. 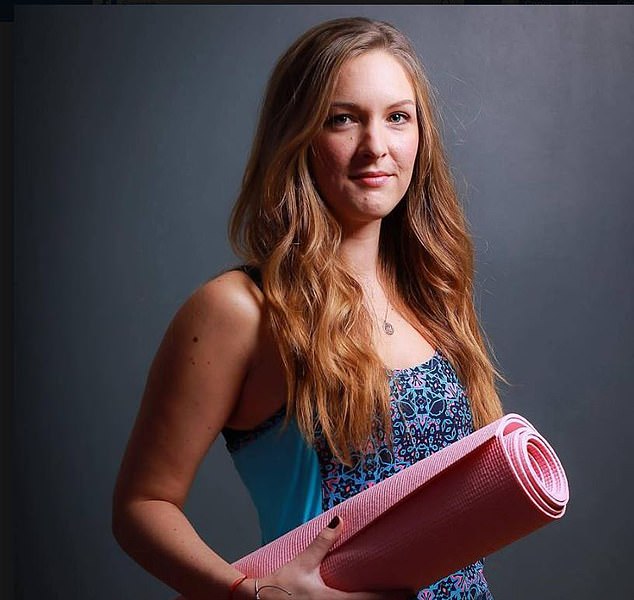 Mrs Newman (pictured) discovered she had cancer about a year ago, after noticing a lump in her right breast 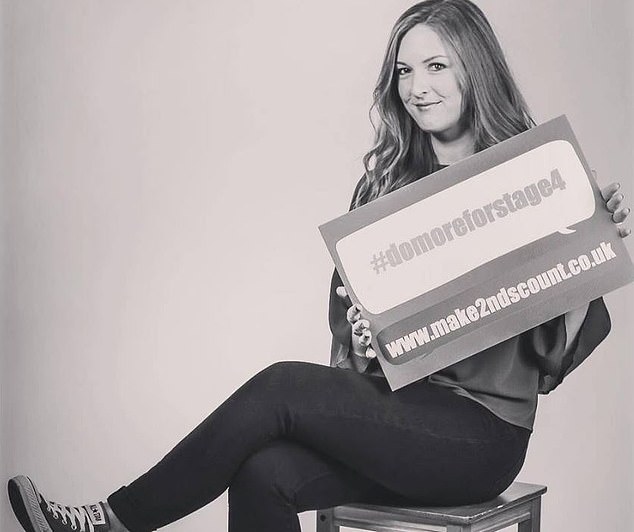 At the time, she was undergoing IVF in a desperate bid to have a baby with husband Alex 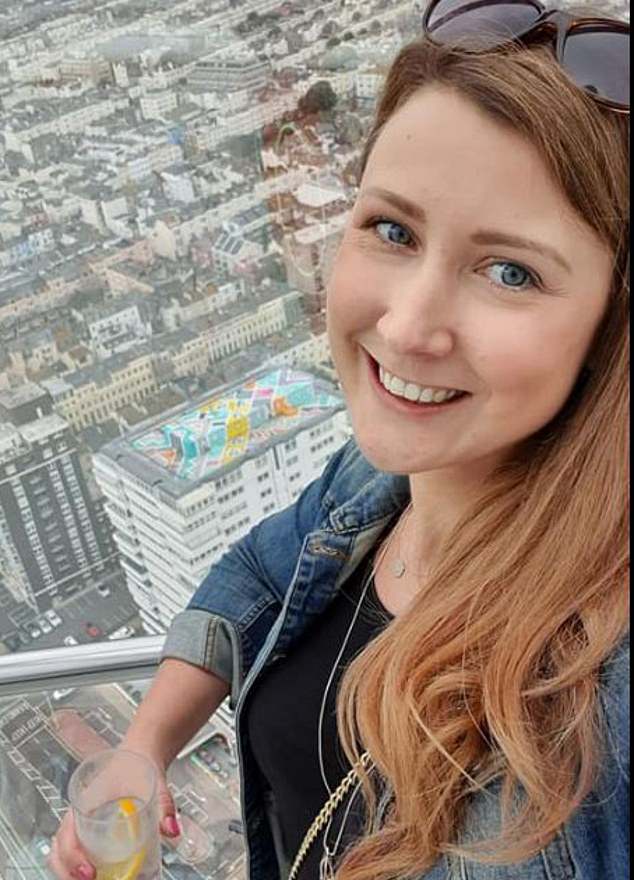 ‘But I decided to go with my gut instinct and went to the doctor, who fast-tracked me for extensive tests.’

Mrs Newman added: ‘Before the word “cancer” was even mentioned, I could see it in the doctor’s face.

‘My first question was “What’s going to happen to my eggs?” At that point, the most important thing to me was having a child. They told me not to panic.’

During tests, Mrs Newman also mentioned that she had been suffering back pains, so she was also referred for specialist imaging. A week later, she was called back.

She said: ‘The surgeon said to me “I’m really sorry, there’s nothing I can do.” It was terrifying.

‘What she was trying to say was that there was nothing she could do as a surgeon – I had stage 4 breast cancer which had spread. But it sent me into a blind panic.’

Mrs Newman added: ‘I didn’t know if I was going to live or die. The whole thing was an absolute blur.’

Mrs Newman needed strong medication to control the pain and temporarily lost her ability to walk.

However, she was put on the drug palbociclib (Ibrance), which had only just been approved on the NHS, and her disease is currently stable.

She said: ‘My oncologist told me that was a game-changer. If it hadn’t been approved, my prognosis would have been very different.’

Mrs Newman took three months off from her job at a finance brokerage. 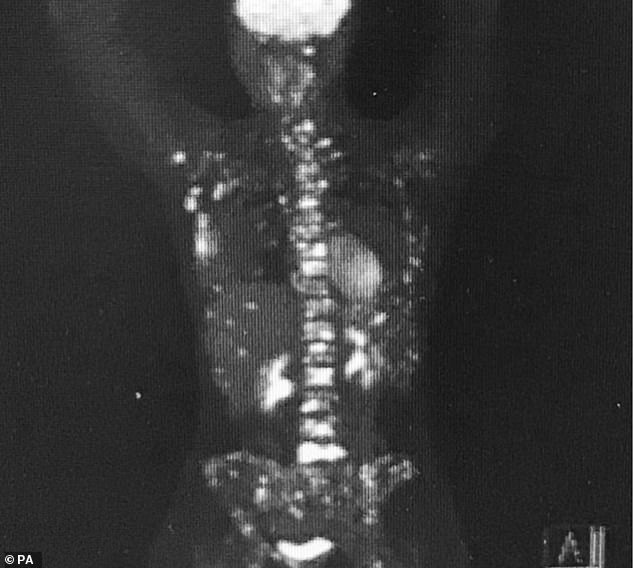 She added: ‘When I left hospital, I was grieving more for the fact that I had lost my chance to be a mother, than because I had cancer.

‘It was only six months down the line that I could finally say “Oh my God, I have incurable cancer.”

‘Then I had to grieve again for the life I thought I would have, or should have had.’

Mrs Newman added: ‘There are tough times, of course, and we don’t shy away from that. But our focus is on living your life and living it well.’

Mrs Middleton-Hughes was diagnosed with breast cancer in 2014 after finding a lump in her left breast while on a dream holiday to Australia.

She underwent a mastectomy and chemotherapy and recovered, but began to feel pain in her right shoulder in April 2016.

WHAT IS SECONDARY BREAST CANCER?

The secondary cancer can take years to return, and does not always reappear in the breast.

Some 35,000 people are thought to be living with the disease –  some 35 per cent of women who get breast cancer will be diagnosed with secondary cancer within 10 years.

While primary breast cancer can usually be operated on or cured with drugs or radiation, secondary cancer is incurable.

Because secondary cancer has already started spreading around the body you can never be completely cured of it.

But chemotherapy, hormone drugs and other treatments can slow down the growth and spread of tumours and improve patients’ lives.

Life expectancy varies depending on how advanced the cancer is, but many women live for years with the condition under control.

The pain continued to get worse and her GP referred her for physiotherapy, and then eventually she had a scan.

Medics found that a tumour had overtaken the head of the humerus – the long bone in the arm from the shoulder to the elbow.

Mrs Middleton-Hughes said: ‘I didn’t know at that point if it had spread anywhere else but immediately I feared it had and I had only weeks to live.’

She underwent a shoulder replacement, which caused her agonising pain, and then started chemotherapy.

At present, she has traces of cancer in her spine, 12 vertebrae and pelvis. Her disease is currently stable, though incurable.

She said: ‘I’m very, very grateful that the treatment I’m having is managing to give me a fairly normal life.

Mrs Middleton-Hughes has had to give up the hairdressing job she loved but in April this year she married husband Brad.

As part of the Stand Up To Cancer campaign, both women have painted their bodies with words which characterise their battle with cancer, including ‘pain’, ‘infertility’, ‘fatigue’ and ‘stage 4’.

The campaign aims to unite scientists, celebrities and communities across the UK to raise cash for rapid new treatments.

It is supported by a host of celebrities including presenters Davina McCall and Maya Jama, comedians Alan Carr and Joe Lycett, and Olympic champion Greg Rutherford.

Lynn Daly, spokeswoman for Cancer Research UK, said: ‘Faced with such a difficult prognosis, Nicky and Laura are being unbelievably brave and positive in sharing their very personal stories.

‘There’s been amazing progress in the past few decades and more people are now surviving cancer than ever before.

‘But with one in two in the UK set to develop the disease at some point in our lives, and thousands and thousands of people in the same position as Nicky and Laura, there’s still so much more to do.

WHAT IS BREAST CANCER, HOW MANY PEOPLE DOES IT STRIKE AND WHAT ARE THE SYMPTOMS?

What is breast cancer?

Breast cancer develops from a cancerous cell which develops in the lining of a duct or lobule in one of the breasts.

When the breast cancer has spread into surrounding breast tissue it is called an ‘invasive’ breast cancer. Some people are diagnosed with ‘carcinoma in situ’, where no cancer cells have grown beyond the duct or lobule.

Most cases develop in women over the age of 50 but younger women are sometimes affected. Breast cancer can develop in men though this is rare.

The cancerous cells are graded from stage one, which means a slow growth, up to stage four, which is the most aggressive.

A cancerous tumour starts from one abnormal cell. The exact reason why a cell becomes cancerous is unclear. It is thought that something damages or alters certain genes in the cell. This makes the cell abnormal and multiply ‘out of control’.

Although breast cancer can develop for no apparent reason, there are some risk factors that can increase the chance of developing breast cancer, such as genetics.

What are the symptoms of breast cancer?

The usual first symptom is a painless lump in the breast, although most breast lumps are not cancerous and are fluid filled cysts, which are benign.

The first place that breast cancer usually spreads to is the lymph nodes in the armpit. If this occurs you will develop a swelling or lump in an armpit.

How is breast cancer diagnosed?

If you are confirmed to have breast cancer, further tests may be needed to assess if it has spread. For example, blood tests, an ultrasound scan of the liver or a chest x-ray.

How is breast cancer treated?

Treatment options which may be considered include surgery, chemotherapy, radiotherapy and hormone treatment. Often a combination of two or more of these treatments are used.

How successful is treatment?

The outlook is best in those who are diagnosed when the cancer is still small, and has not spread. Surgical removal of a tumour in an early stage may then give a good chance of cure.

The routine mammography offered to women between the ages of 50 and 70 mean more breast cancers are being diagnosed and treated at an early stage.