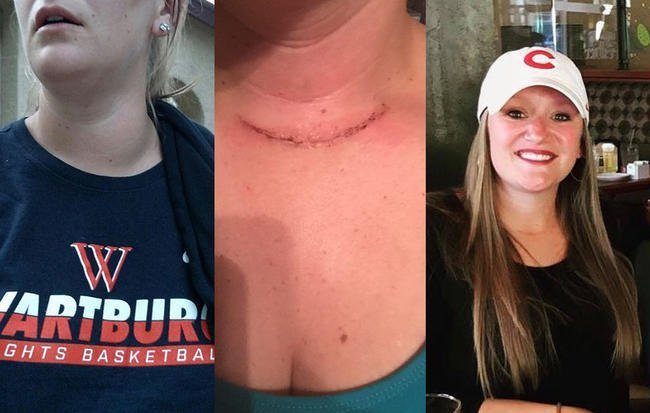 No one ever expects to get cancer, but as a healthy 29-year-old working in the fitness world, I really didn’t see it happening to me. Of course, looking back now, it’s easy for me to see the palm-sized tumour poking out of my neck in old photos. But at the time, I had no idea there was anything wrong.

Life seemed normal. Or at least, normal for me. As an athletic trainer for women’s gymnastics at the University of Iowa, my job involves weird hours (we’re talking 5 a.m. to 3 p.m.) and tons of traveling. So being tired—a sign that something’s off with your thyroid—was nothing new to me. A few years ago, before my diagnosis, I was maybe a little more sleepy than usual, but I really didn’t think anything of it. I didn’t recognize any other symptoms.

Then, at a routine yearly gynecologist exam in July 2016, my doctor felt a lump in my neck. She ordered a bunch of tests, but everything came back normal, as it always had. But she pushed for an ultrasound, which confirmed there was a large mass on my thyroid. That’s when I started to worry. Suddenly, all I could see was the lump. It was the size of the palm my hand. And I had a feeling that something was very wrong.

I had the mass biopsied, which meant getting a needle stuck in my neck about nine times. My results came back early (working in the health industry has taught me that’s usually not good), and I got the news: It was cancer. Based on the size of my tumour, my doctor told me I had likely had cancer for five years without knowing it.

I had been preparing myself for the worst, but it was still a total shock. The whole thing seemed totally random, and I had no family history of thyroid cancer to blame. My mum and sisters and I sat in the doctor’s office and cried together; I think my mum took the diagnosis harder than I did. I spent a few days after that in “emotional-mess mode,” crying, asking “why me?” Luckily, my family was by my side the entire time.

After letting myself grieve, I knew I had to get myself into a positive place to beat it. I’d been told that thyroid cancer tends to have good prognoses. I was 29, with so much of my life ahead of me; I was not going to let cancer beat me.

One of the things that helped me stay mentally strong was the fact that I work with athletes who are struggling through injury every day. In order to support them, I have to truly believe that physical setbacks can make you a stronger person emotionally. I just had to apply that mindset to my own situation. Instead of being afraid, I had to move on and conquer this thing.

My doctors let me know they could remove a portion of my thyroid or the whole thing. Keeping a portion of it meant I possibly wouldn’t need hormone medication, but I opted to have the whole thing removed to be safe and avoid another surgery down the line. I had two of my parathyroids (glands behind the thyroid that control the calcium levels in your blood) taken out as well, since they’re difficult to detach from the thyroid. I had the surgery in August, about a month after getting my biopsy results.

For the surgery, I was put under anesthesia and the whole thing took about two hours. They removed the tumor, which ended up being 5.4 centimeters in diameter, and the rest of my thyroid, leaving me with a big scar across the bottom of my neck. I was so nervous before going into the operating room. I’ve only had surgery one other time in my life, and so even though I’m used to watching surgeries on my athletes, I was scared of being the one on the table. Thankfully, I had a lot of support—my parents, sisters, grandma, aunts, uncles, and a coworker came to be there when I woke up.

Coming out of surgery and having everyone there for me was one of those moments when I felt like cancer actually helped me. The whole process was showing me who was really there for me, and how many people actually had my back when I needed it the most. I’d found my tribe, and I felt so grateful.

I spent a night in the hospital, where the doctors checked my calcium and hormone levels. They put me on Synthroid right away, which is a medication that simulates the hormones my thyroid would be making, and I’ll be on that for the rest of my life.

I was supposed to take two weeks off, but I reported back to work eight days after my surgery—I couldn’t wait to be busy again and back with my colleagues and athletes. My doctors told me I couldn’t lift more than 10 pounds for two weeks, and then no more than 20 pounds for four weeks. That meant I couldn’t exactly manoeuvre athletes’ bodies as usual, or even lift a six-pack of water bottles, but my coworkers helped me out. It felt good to be back at work, doing what I love.

Immediately after the surgery, my tumour had been sent away for examination, and soon it was determined that my cancer was a rare form called Hurthle call carcinoma. That form tends to be more aggressive than other types of thyroid cancer, my doctor said, so that meant I had to start radioactive iodine therapy. Because the thyroid absorbs the majority of the iodine in your body, radioactive iodine treatment concentrates in thyroid cells to destroy any that still remain following surgery.

Before I could begin the treatment, I had to start on a low-iodine diet, which was super restrictive. No red meat, no bread, no processed food, nothing with red dye in it, nothing red at all (even red capsicums!), no iodised salt (which isn’t clearly marked on nutrition labels, so that turned into “no sodium at all”). Basically, I just ate apples, a special pumpkin bread my mum made, and Diet Coke for two weeks.

When I actually received the radiation medication, starting in October, I was given pills by masked and gloved nurses, and then had to drink a solution that tasted like straight-up ocean water with my head inside a glass box, so I wouldn’t expose the physicians around me to the radiation. I went to my parents’ house afterward to start my isolation period—I couldn’t be around people because I was so radioactive. I was essentially locked in the basement, where I had to sit on blankets and flush the toilet three times after I went to the bathroom to keep their home safe. I had to eat a ton of Sour Patch Kids and Lemonheads to help flush the radiation out of my salivary glands, where it was built up, and I felt like I’d been punched in the face. The whole thing was weird and very lonely.

After three days, I could be around people again, excluding pregnant women and children. I decided to go work a football game since I’d safely be around only adult men on the sideline, and after, I felt worse than I had in a long time. I had terrible headaches and was exhausted. Looking back, I think I needed more recovery before returning to my job, but at the time, I’d just needed to get back to work to have the distraction from everything else.

Eventually, I stopped feeling so tired after daily activities and work. I actually started to feel like I was excelling at my job more than I had before, because I was more empathetic and patient. I was a better trainer to my athletes because I truly understood what it’s like to have your world upended by something medical, and I could relate to them in a whole different way.

Having cancer was in no way easy, but my life was starting to become more positive because of it. I more easily recognised negativity and stress in my life and cut those things out. Cancer was changing me for the better and showing me how strong I truly am.

In May 2017, after several follow-ups, I got the great news that I was cancer-free. But still, life definitely isn’t the same as it was before I found out about my cancer. Since I no longer have a thyroid, I have to take hormones that control my metabolism, blood calcium, and energy levels. My doctors haven’t figured out quite the right hormone levels for me, so I sometimes hit a wall and feel totally wiped out in the afternoons now, or, on the opposite end of the spectrum, I might lay down and feel my heart racing.

I’ve gained a little bit of weight, and it feels like I have to work harder to lose it now. I also have to carry TUMS with me everywhere, because my calcium levels can drop randomly, which makes my face go numb. As soon as my nose and cheeks start to lose feeling, I pop a TUMS, which are basically all calcium, and I get the feeling back.

I’m still paranoid that I have some other health condition that I know nothing about. It just makes me think, “What else is going on that I don’t know about?” I try to do everything I can to put myself in a good position health-wise, like eating more vegetables, working out more, and never postponing checkups. I have to get blood work, an ultrasound, and a scan every May now, and I always get some anxiety around that time.

Still, I’m relieved to be where I’m at, and feel lucky to be cancer-free. I’m grateful that I can move forward from this, better than before.