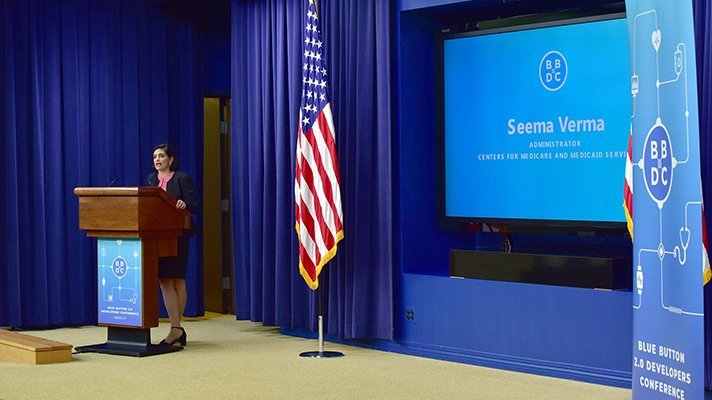 "We're at the beginning of the digital health revolution, we have the ability to take that data and unleash it," Verma said Monday here during the White House Blue Button 2.0 Developer Conference. "We're unleashing the most powerful force in our economy: the consumer."

Verma added that CMS is creating a new type of patient profile by making the agency's massive amounts of claims data available to the public via the Blue Button 2.0 application programming interface.

"Were' not stopping there, we are leading by example and calling on all insurers to release data in an API format," Verma said. "You'll see through our regulatory process that we're very serious about that."

Healthcare organizations should also anticipate that more payers doing so will create new opportunities to align around the data, said Shannon Sartin, executive director of the United States Digital Service, which has worked with CMS on Blue Button.

In a meeting of the digital service, which helped CMS develop the Blue Button 2.0 API, USDS Deputy Administrator Edward Hartwig said that Blue Button is a broad effort and not an "if you build it they will come"-type initiative – because the government also has to get the word out so people know about it and, in turn, use the API.

It was also at the Blue Button 2.0 conference that some heavy-hitters from the private sector – Amazon, Google, IBM, Microsoft, Oracle and Salesforce – pledged to work together to leverage APIs and other interoperability specs to break down barriers to health data exchange.

"We're on the cutting edge of what digital medicine is going to be in this country," Hartwig said.

"The potential of what this data could mean for our country is really unimaginable," Verma said.