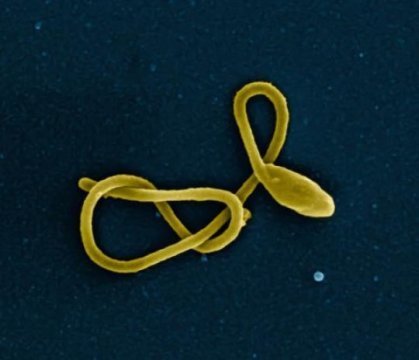 Recent Ebola virus disease (EVD) outbreaks, including the 2013-2016 epidemic that ravaged West Africa and the 2018 outbreak in the Democratic Republic of the Congo, highlight the need for licensed treatments for this often-deadly disease. ZMapp, an experimental therapy comprising three monoclonal antibodies, has shown promise in a clinical trial, but it targets only one of the five known species of Ebola virus. Now, scientists supported by the National Institute of Allergy and Infectious Diseases (NIAID), part of the National Institutes of Health, have discovered a set of powerful, broadly neutralizing antibodies (bNAbs) in the blood of EVD survivors. In animal studies, two of these antibodies provided substantial protection against disease caused by Zaire ebolavirus, Bundibugyo ebolavirus and Sudan ebolavirus, the three species known to cause fatal human illness.

Ebola virus uses GP to attach to cell membranes and initiate infection. In a series of experiments, the team delineated interactions between various forms of viral GP and three of the newly isolated bNAbs. The results provided evidence of multiple mechanisms by which the antibodies inhibit actions of all forms of GP, thus preventing infection by halting viral entry into the host cell. The team also determined that one of the bNAbs, EBOV-520, recognizes and binds to a portion of virus GP in such a way that prevents it from interacting with a cell surface protein called NPC1 and initiating the infection cycle.

The researchers conclude that these broadly neutralizing antibodies are promising candidates for further development as therapeutic molecules against several ebolavirus species.