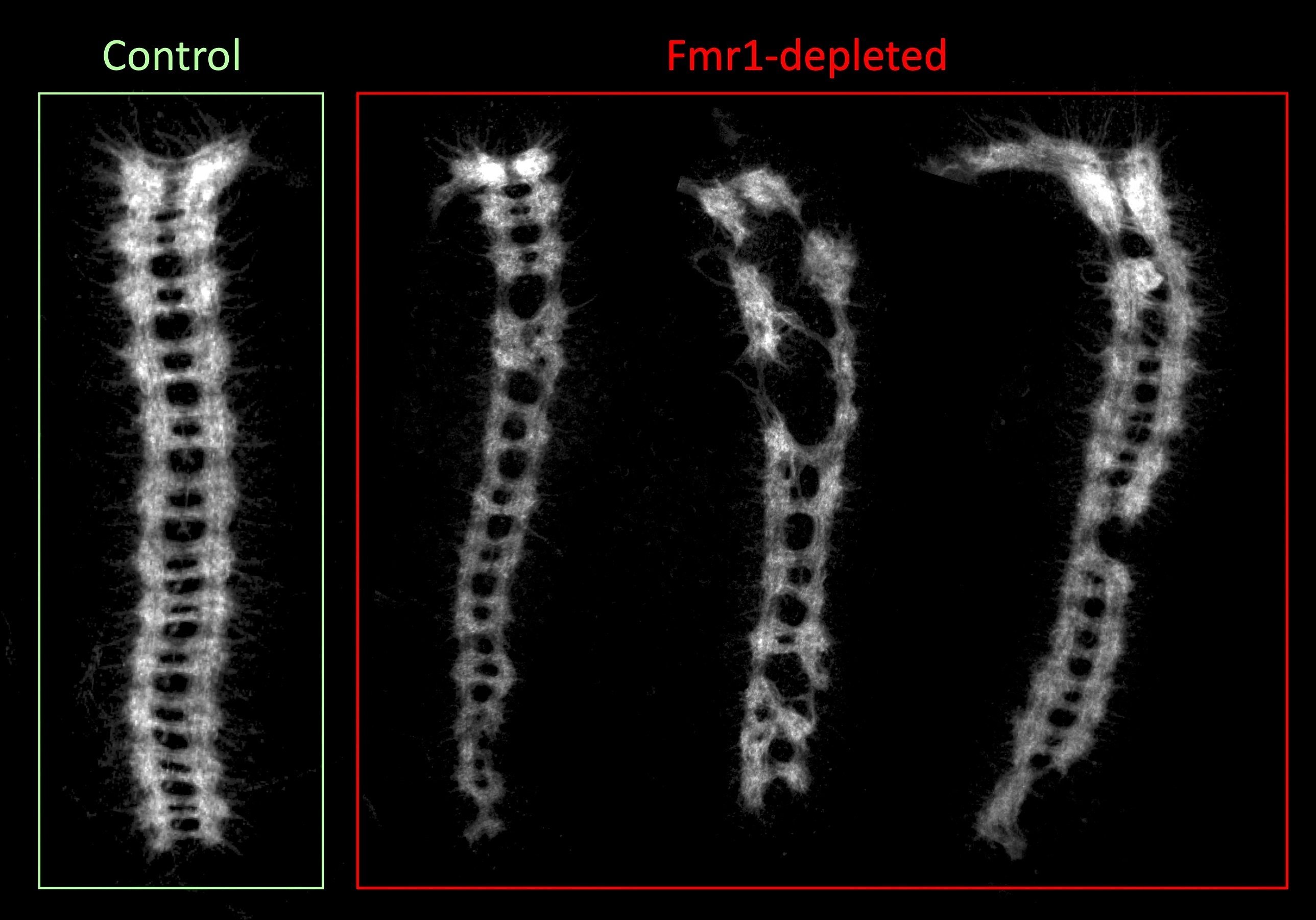 New work from Carnegie’s Ethan Greenblatt and Allan Spradling reveals that the genetic factors underlying fragile X syndrome, and potentially other autism-related disorders, stem from defects in the cell’s ability to create unusually large protein structures. Their findings are published in Science.

Their work focuses on a gene called Fmr1. Mutations in this gene create problems in the brain as well as the reproductive system. They can lead to the most-common form of inherited autism, fragile X syndrome, as well as to premature ovarian failure.

It was already thought that Fmr1 plays a pivotal part in the last stages of the process by which the recipe encoded by a gene is used to construct a protein.

Here’s how it works:

Our genetic information is stored in DNA molecules, which are bound up tightly in the nucleus of each cell. Think of this as a master list of instructions. Before the cell can read one of the protein recipes, it must be copied over—or transcribed—by the more-mobile RNA. Think of RNA molecules as runners, carrying bits of code from the nucleus to the place where the protein will be manufactured. The RNA’s code is then translated into a string of amino acids by a special protein-making assembly line.

In most instances, these steps—transcription from DNA to RNA and translation from RNA to protein—occur in rapid succession. However, in some highly specialized kinds of cells, including neurons and eggs, it is necessary for RNA to be created and then stored for future use.

Previous work had suggested that Fmr1 prevents the stored RNA molecules from overproducing new proteins. But since many of these studies were done with brain cells, in which the results were very complicated to analyze, Greenblatt and Spradling set out to solve the problem by studying Fmr1’s effects on the protein-manufacturing process in a much simpler type of cell—fruit fly eggs.

“Our results surprised us,” Spradling said. “We found that egg cells lacking Fmr1 were at first completely normal; but over time, if they were stored, they lost function much faster than stored eggs with normal Fmr1, which is reminiscent of the human ovarian failure syndrome. What’s more, when fertilized, these Fmr1-lacking eggs created offspring with severe nervous system defects, which is reminiscent of fragile X syndrome.”

Expanding their analysis, Greenblatt and Spradling revealed that Fmr1 mutant egg cells produce reduced amounts of several hundred proteins, many of which, if missing completely, are associated with autism.

A common denominator among the affected proteins is that they encode some of the largest proteins constructed by our bodies. Even in normal eggs, large proteins, including those affected by Fmr1, are produced inefficiently, reflecting the challenge of stringing together a very long protein chain under conditions of RNA storage.

“We think that Fmr1 serves as a sort of a helper, which boosts the production of critically important large proteins that are difficult for eggs or neurons to manufacture,” Greenblatt said. “Without Fmr1, egg cells have inadequate supplies of specific large proteins and prematurely start to fail. Since Fmr1 is also important in the brain, the loss of certain large proteins associated with autism could explain the autism-like symptoms of fragile X syndrome patients.”