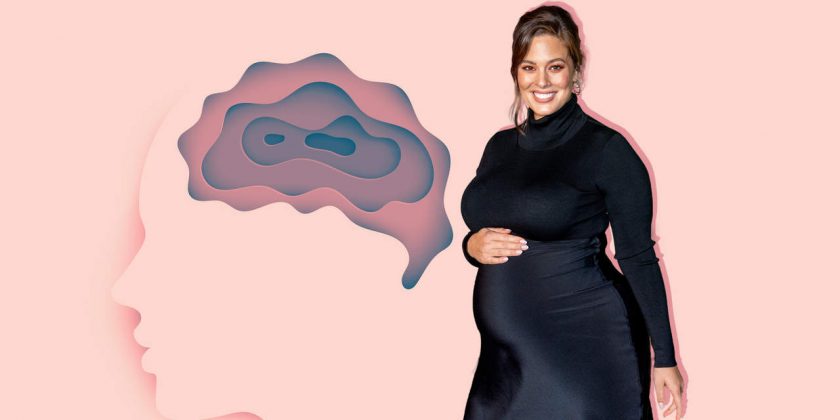 Since revealing her pregnancy back in August, Ashley Graham has been sharing all the details of her mom-to-be journey–including some very intimate shots of her growing bump.

Now, on Thursday’s episode of The Ellen Show, Graham, 32, revealed one of the mental struggles that go hand-in-hand with pregnancy. In addition to announcing to the world that she’s having a boy (insert excited emojis!), the body-positive activist and supermodel said she’s suffering from “pregnancy brain.”

During her conversation with the talk show host about her attendance of Ellen’s October 12 even for The Ellen Fund, Gorillapalooza, Ashley admit that the “night got a little weird” for her, after accidentally sending some personal photos to a stranger.

“You’ve heard about pregnancy brain, right?” the supermodel asked Ellen. “So I have forgotten my phone number. And you know after you get your glam—I don’t know how long it takes you to be in glam but for me it’s about two hours—you want to post that photo on Instagram?”

“I was giving my glam my phone number and after she sent the six photos I had realized I gave her the wrong phone number and someone sent back a thumbs up and it wasn’t me,” she continued. “So there are photos of me out and about in the world. At least I am covered.”

So what exactly is “pregnancy brain”?

Pregnancy brain is a term that has come to describe the forgetfulness that many women experience during pregnancy—about 80 percent of new mothers report difficulty remember things, according to Scientific American.

But, while many consider “pregnancy brain” to be anecdotal and somewhat of an old wives’ tale, there is actually substantial science behind it—and it’s not necessarily a negative thing.

“The reality is that research has found that the high levels of estrogen and progesterone in a pregnant woman’s body enhance certain cognitive abilities,” Felice Gersh, MD, OB/GYN and founder/director of the Integrative Medical Group of Irvine, in Irvine, CA and author of PCOS SOS: A Gynecologist's Lifeline To Naturally Restore Your Rhythms, Hormones and Happiness, tells Health.com.

Yep, you heard that right: Pregnancy brain can actually improve some cognitive function. “The hormones increase her spatial cognitive capabilities and reduce fear and anxiety,” she says, adding that it could also increase an expecting mother’s ability to multitask.

And over the last few years, a few studies have supported “pregnancy brain” as being totally legit. A 2016 study published in Nature Neuroscience found that during pregnancy women undergo significant brain remodeling—specifically in the grey matter region associated with social cognition and theory of mind—that persists for at least two years after birth.

Another 2018 study published in the Medical Journal of Australia, found that compared to non-pregnant women, those expecting performed worse on tasks measuring attention, decision-making, planning and memory. While it’s still unclear exactly what causes baby brain, most experts believe it has to do with the brain’s way of specializing itself, in preparation for motherhood.

“Pregnancy is not an evolved state of mental decline but of alterations within the female brain designed to increase survival and the ability of the mother to want to care for her offspring and to do it more successfully,” points out Dr. Gersh, who also cites some studies in rats that have found that those who have born babies show more competence in finding food and less fear, in addition to better cognitive abilities in old age.

“Pregnancy appears to be beneficial to female brains, not detrimental,” says Dr. Gersh. “The brains of pregnant women are evolving to be more powerful — to enable her to protect and to care for the baby more successfully. Nature didn’t evolve human females to become mentally incapacitated by pregnancy, but rather to be mentally enhanced by it!”

So, while pregnancy brain might impact Ashley’s ability to remember her phone number, it is going to help more than hurt her role as a mother in the long run.

To get more body-positive stories like this delivered to your inbox, sign up for the WomenIRL newsletter.