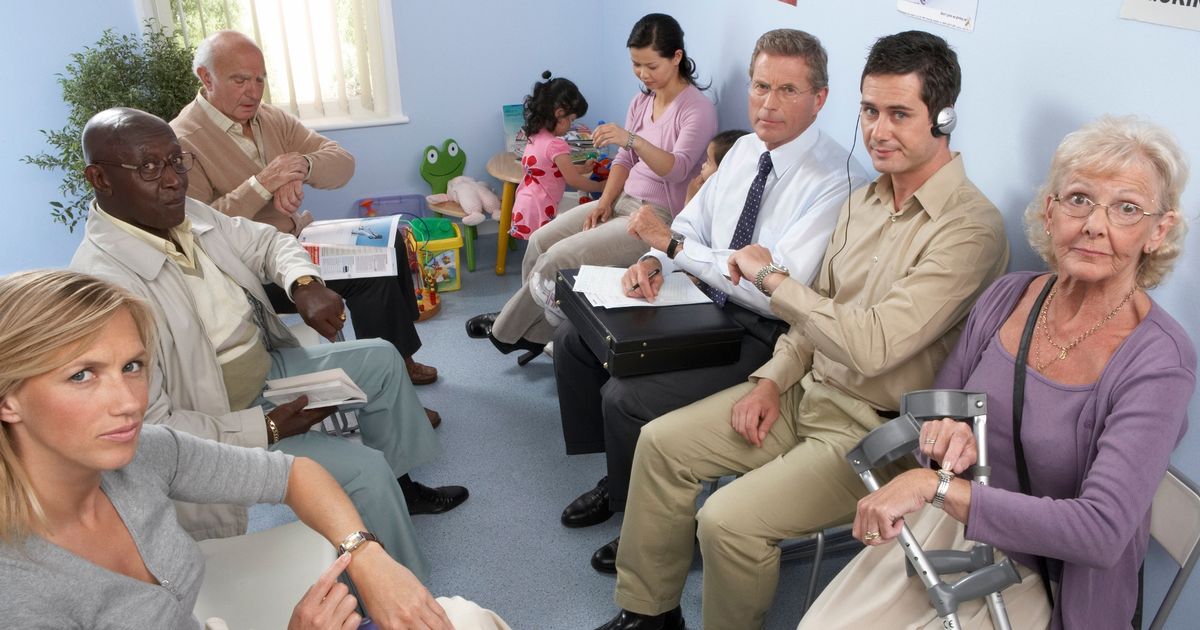 I went to the doctor last week. Don’t worry, I’m not ill, no need to send flowers or chocolates. Well, maybe just the chocolates. But don’t go to any bother. And while you’re sending those you might as well send the flowers. Anyway.

There is something about doctors’ waiting rooms, isn’t there? You notice some strange characters.

There is Nora Know-It-All – the leader and I KNOW MY WAY AROUND type who tries to organise the waiting room, insisting on talking to everybody, asking what they’re here for, revealing her symptoms and how she’s always in here (‘I should get a loyalty card!’), and letting you know when your name is called even though you heard it perfectly well with your own ears.

Her proudest moment is when someone’s in the toilet and has their name called. This is when she shines. She will leap to attention and declare, ‘She’s just gone to the loo! This minute! She’s been waiting and waiting! Now you call her! Typical!’

Then you have Coughy McGee. He doesn’t cover his mouth and everybody is scowling at him. Nora is ready to rugby tackle him. Luckily he gets called by the doctor.

He doesn’t hear it over his own coughing so Nora has to tell him it’s his turn, this makes her instantly forgive him and saves him from being wrestled violently to the ground and gagged.

You also have those who transform into a whispering, shy Victorian lady. The type who don’t complain they’ve been waiting seven hours because the receptionist forgot to type in their name, and now the surgery is closing, so they decide to just go home and drop dead on their chaise longue of TB rather than be any further trouble to the good doctor.

Then you have the MY BABY IS ILL mother, who is clutching her baby to her chest even though it’s squirming because it wants to play on the plastic Post Office in the kids’ corner.

She doesn’t stop asking her child how it feels, even though it can’t talk, because she wants people to know that she is a good mother who only lets her child play with organic non-plastic toys, and also that her baby is ill.

Then come the Huffers & Puffers, who sit up dead straight every time a doctor comes out, ready to spring into action, only to huff and puff when it’s not them who’s been called.

It was stressful. I need those chocolates…