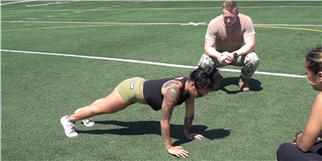 Are two athletes who do CrossFit Navy-ready thanks to their intense training regimen in the box? Well, ready or not, they are about to find out. In a YouTube video by Austen Alexander, the active duty Navy sailor challenges two CrossFit enthusiasts to complete the U.S. Navy Physical Readiness Test.

The PT test, known as the Navy PRT, is a series of three timed physical fitness tests those in the Navy need to take every six months. This consists of a 1.5 mile run to be completed as quickly as possible, along with 2-minute tests of situps and pushups, with scores calculated on how many reps a recruit or veteran sailor successfully complete in the time frame. Final scores are based on all three events, and are scaled for a participant’s age and gender.

The pair begins with the situp round of the test, breezing through with relative ease. Helen completes an impressive 69 reps in the 2-minute test, but is bested by Elane’s 77 successful situps.

“That’s like more than me,” Alexander said in response to Elane’s performance.

Even with the turf burning their hands during the pushup round, the women still crushed expectations. Helen came out on top this timed test with 44 pushups in 2 minutes, while Elane was slightly behind with 39 pushups.

The final test, a 1.5 mile run, was the trial both women were dreading—but it quickly became clear they had nothing to worry about. Elane completed the run in a time of 10 minutes and 40 seconds, with Helen just behind with a mark of 10 minutes and 56 seconds.

As for final thoughts on the Navy PRT, Helen had some words to sum up her experience. And it appears she won’t be joining the Navy anytime soon.

“I would like a barbell and some gymnastics,” she said. “I’m a CrossFitter—and I hate running.”

Watch the full video here—and maybe try the test yourself next time you want a challenge.