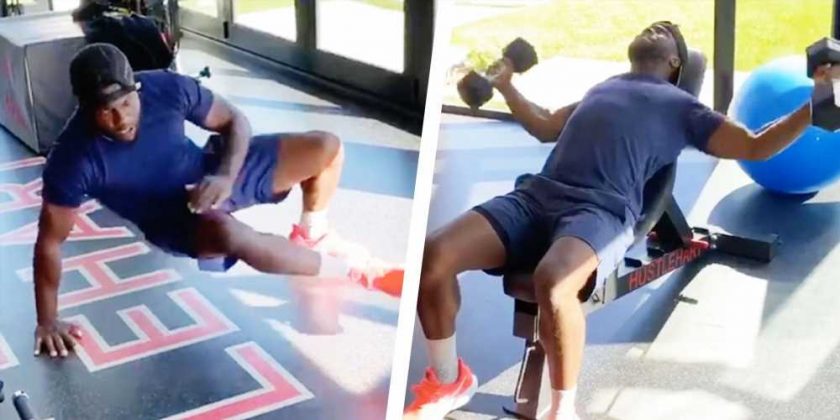 His What the Fit webseries might be on hiatus, but Kevin Hart is still busy posting workout content. The actor and comedian shared a new look at his “Hustle Hart” exercise regimen on Instagram this week, demonstrating how he has been staying in shape at home during lockdown.

Stating in the caption that there is “no better project than self improvement,” Hart shows off his technique in a number of moves, starting with the sit-through, a core exercise which looks pretty basic, but which is surprisingly challenging to pull off as fluidly as Hart does here.

“Hart is taking the right approach, doing it slowly so he can master the timing,” says Men’s Health fitness director Ebenezer Samuel C.S.C.S. “Work to keep the ‘kicking’ hip low to the ground; that’ll challenge your abs more than you think.”

He hits dumbbell flies next, although he doesn’t use heavy weights. “This move is about control, and it’s critical to squeeze your shoulder blades when you do it,” says Samuel. “Also, note that Hart isn’t flaring his ribcage massively, and he’s not lowering the dumbbells and chasing a ‘stretch’ in his chest. Lower only until shoulders and elbows are on the same plane, then drive up.”

Hart follows this with pullups and leg lifts, maintaining decent form, although Samuel adds that ideally you should “create more tension on the leg lifts instead of using so much momentum.”

Next up are dips with leg lifts. “This is a move you want to skip at home, since it really invites you to round your shoulders forward,” says Samuel. “Hart is also doing them in a direction that sort of ‘pinches’ his legs; he’d be better off turning around so he had a bit more room to move.”

Hart finishes his “hustle” of a home workout with an accessory move: seated biceps curls. When incorporating these into your own home workout, Samuel advises: “Try to keep your torso steady, and squeeze at the top of each curl rep.”