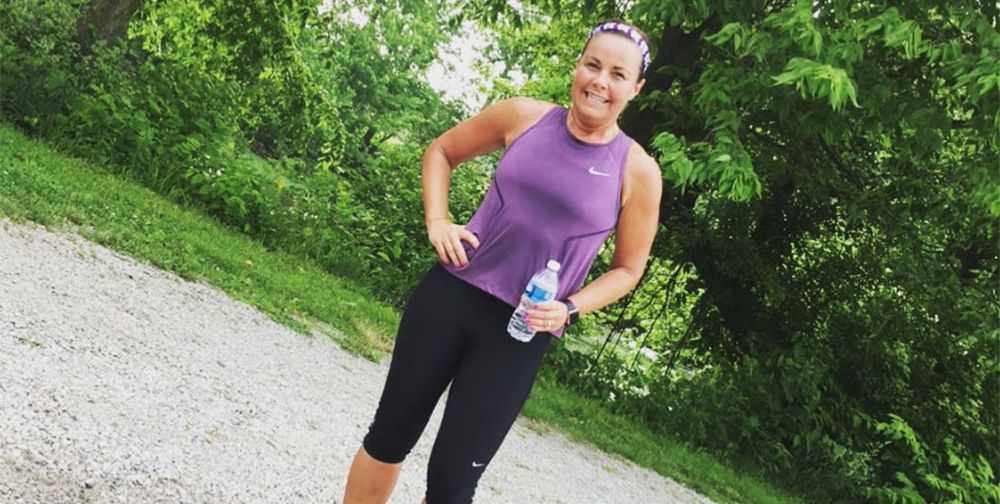 Nearly a decade ago, my life was consumed with being a wife, a mom to two toddlers, and a full-time pharmacist. Every day, I jumped out of bed and started my day in a rush. I was constantly stressed and let my emotions rule the rest of my waking hours. Fitness never even really crossed my mind, it was so out of reach. I felt like taking an hour for myself each day would be selfish.

But one night in 2008 (at a time when my confidence was at an all-time low), I was watching The Biggest Loser, and the contestants were preparing for a half-marathon. As I watched them train to run that race, I thought: If they can do it, so can I. I just wanted to be able to accomplish something new—and that was the spark of inspiration I needed.

#flexfriday ??????. Things are changing and it’s exciting. Hard work pays off! I almost skipped this AM because I was late but did it anyway. And so glad I did. 50 minutes is better than nothing and my mindset is so much better if I start my day with a workout! #happyfriday #eventhoughiworkallweekend #gfitclub #flex #jimstoppani #shortcuttoshred #thick #igfitness #liftandrun #fitmom #nikewomen #fitpharmacist #strongnotskinny #healthyisthenewskinny #iifym #progress

I signed up for a half-marathon and started a 16-week training program.

I’d never really worked out on a regular basis, just the occasional video here and there. The first week, I was supposed to run two miles but I had to stop after just half a mile. I was so frustrated. But I decided right then and there I would train for and complete that race, no matter what.

I slowed my pace. I completed every prescribed run. It was so hard, and I felt a little guilty taking the “me time.” Plus, I was so intimidated by the miles I needed to cover each week.

I was low-key documenting my journey on Facebook, and got lots of encouragement and respect from other people, which really helped keep me motivated. I wasn’t sure I really liked running, but I knew I loved the feeling of accomplishment as I marked each day off my training calendar.

When it came time for the actual race —what an emotional experience. I finished in 2:33 and was so proud! I did it! It wasn’t as if I had never accomplished anything before—I graduated from pharmacy school and had a great career. But I started to lose myself a little after I had kids. This was the first big thing in a long time that I had to really work at to succeed.

I didn’t lose a pound during training, but after that race, I fell in love with running.

After that race, I dove into the running lifestyle. I loved pushing myself and discovering that I was pretty strong mentally, so I signed up for more half-marathons and started focusing on improving my times.

I started running with friends and getting creative about getting my long runs in—running on the treadmill, up and down our street, on the bike path, around our high school track about a million times, even doing laps around the campground when we were on summer trips. As I progressed I started running in different places where we were vacationing: Florida, California, even on cruise ships while sailing the seas.

I hit my goal to finish a half in under two hours in 2015, six years after my first race. Then, I decided to run a full marathon.

Time was one of the biggest obstacles to staying committed. As my kids grew older, I had to start dragging my butt out of bed while everyone was still sleeping to do my runs. It was so hard at first, but now my day feels totally off if it doesn’t start this way.

Two winters ago, my training partner and I decided to start incorporating weights too, to see how it would affect our running and our body composition. We signed up for a 16-week lifting program—and loved it.

But, after a year of this, I realized (through following several Instagram accounts) that if I wanted muscles I had to feed my body to build them. Even though I was lifting, I was still eating in a deficit so I was kind of sabotaging my efforts. I upped my calories, kept lifting, and that’s when I really started to see results.

Posting this pic just because… I feel strong and fit! For me Fitness is about so much more than weight loss. It is a very important part of my life- I have met some of the best people and had some of the best experiences because of my fitness journey. I am so blessed and grateful. #gfitclub #blessed #loveyourself s#strongnotskinny

Sundays are my rest day. My routine right now involves about one hour of lifting—lots of supersets—with a couple miles of running either before or mixed in.

About two days a week, when I have extra time, I will go on a long run too. In about a month, I am going to start seriously training for another half-marathon with a goal of a PR, so I will be running more and temporarily cutting back the weights to two to three times per week.

#macroroundup for today! Fully recommitted to #iifym starting yesterday. Weighing and tracking everything that goes in my mouth might seem obsessive to some but why put so much work in at the gym and not give it my all in the kitchen? Getting back to goal weight no matter what! Swipe for all the deets on my macros. Oh and @cocoabarinajar is the bomb! #gfitclub #iifym #iifymgirls #poppysarmy #progress

It’s been life changing. Nothing is off limits as long as it fits within the prescribed amount of protein, carbs, and fat I’m supposed to eat each day (I will never give up peanut butter!). It’s really helped to heal my relationship with food.

It took a lot of work to get started—lots of support from my macro Facebook group, lots of Instagram inspiration, and lots of prep. Now it’s just my way of life.

Late night so didn’t make it to the gym this AM. I decided to do a #Tabata workout in my (very messy) basement mixed in with some #treadmill miles. I just wanted to say that letting go of the scale has had a huge impact on my mindset. I had shrimp tacos and M&M’s last night and enjoyed every moment of it with my family and friends. It didn’t change the way I felt/looked this AM and I got right back to my regular routine (although a late start ?) today! #gfitclub #liftandrun #strongnotskinny #thick #healthyisthenewskinny #fitmom #fitpharmacist #igfitness #iifym #progress

I no longer focus on the scale. Instead, I track the amount of weight I’m lifting. I feel like lifting gives me a sense of accomplishment similar to what running did when I first started.

I still run—it’s my therapy! I made so many friends through my fitness journey and even ran a 150-mile relay with nine other people. My husband and I also ran a half-marathon together—something that he said he would never do. I like to think that I set a good example for him and our kids.

What I really learned by becoming a runner was to love myself. And it took a lot of work to get to that point. Fitness showed me that I am a very capable person and can do anything I set my mind too.

I’d never ran more than a lap up until 10 years ago, and now I’ve run countless 5Ks and half-marathons, and even two full marathons. I could never have imagined deadlifting and squatting, yet here I am doing it. You are never too old or too busy to get started.