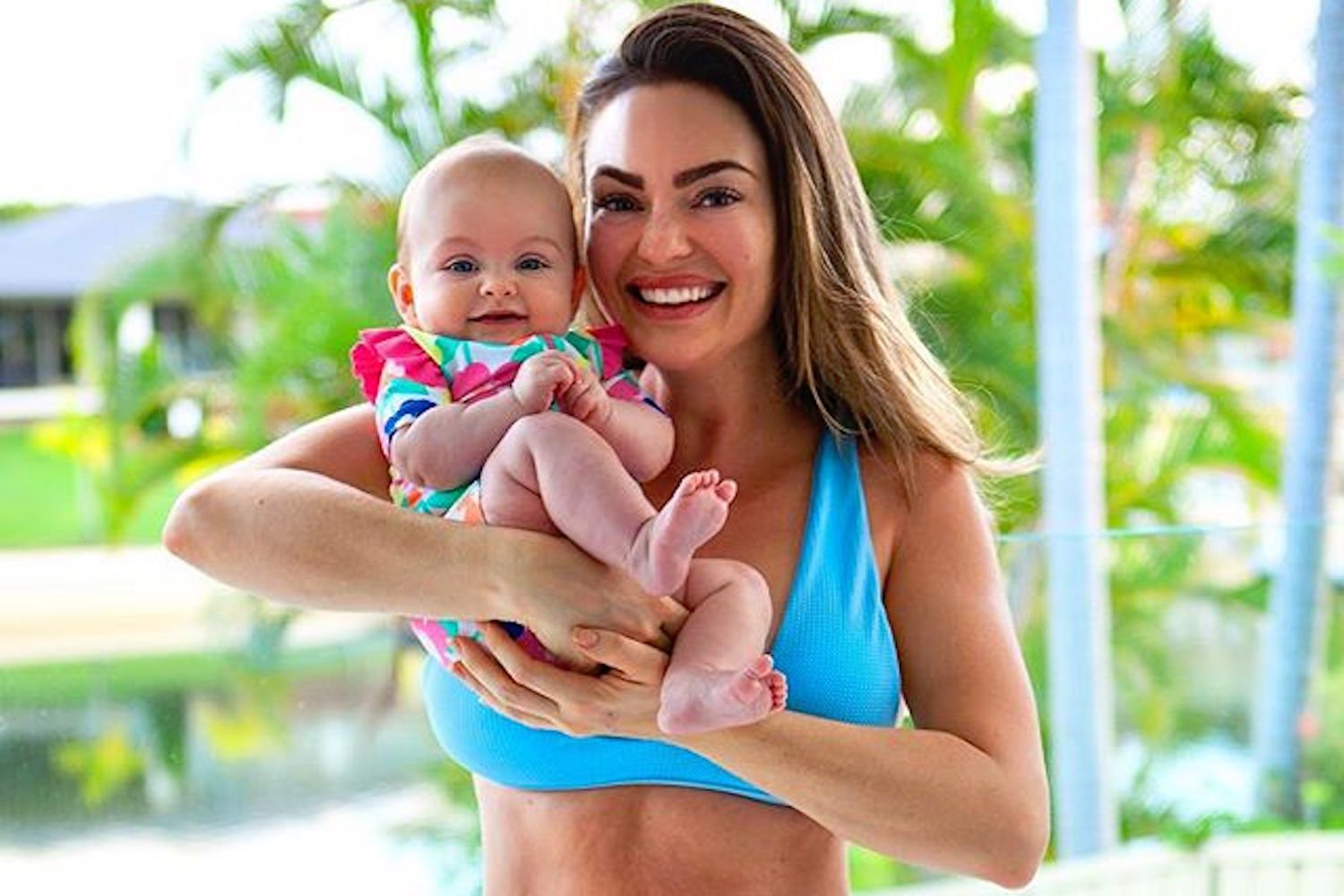 Emily Skye is back at it with yet another relatable message on Instagram about fitness goals post-baby.

The Aussie fitness and health guru posted a split-screen photos of herself—head-on and in profile—in a blue bikini looking lean and strong four months after having her daughter Mia. But Emily admitted in the caption:

“I haven’t reached my fitness goal yet & I don’t know if I ever will. That’s the thing with living this lifestyle, there is no end goal for me, it’s ongoing & all about setting & achieving smaller goals."

I haven’t reached my fitness goal yet & I don’t know if I ever will. That’s the thing with living this lifestyle, there is no end goal for me, it’s ongoing & all about setting & achieving smaller goals! I’ve had a few hurdles that threw me off track – but that’s just life. I try to accept & adapt. Of course when sh*t happens it’s frustrating & I get annoyed & upset but I try not to dwell on the things that are out of my control & choose to do what IS in my control. I also try to get some perspective & practice appreciating what I do have. I have a beautiful family & they are my priority. I also have my health which I am SO grateful for. ?? I am only human though so I thought I’d share with a few silly thoughts that go through my head sometimes in case some of you feel the same – you’re totally not alone haha! ? A few times I’ve said to my partner Dec things along the lines of “why aren’t I getting leaner?”, “how come other people get back in shape quickly after giving birth & I didn’t?” I even started to believe what many people tell me, that I won’t ever get back in shape. I know it’s not true but sometimes I doubt myself & my mindset gets a little unfocused. I often preach loving yourself & your body, not beating yourself up and not comparing to others etc. but sometimes I don’t exactly “walk the talk”. I try to & WANT to but sometimes I forget. I want to set a good example for Mia & for you all who follow me. I just want you to know that I’m far from perfect in many ways. I don’t always “love myself”, I don’t always feel confident & accepting of my flaws. Sometimes I do beat myself up & compare myself to others & don’t feel “good enough”. When I feel like this I remind myself of the things I preach to others – that I should treat myself how I would treat my daughter Mia. I should tell myself what I’d tell her & love myself the way I love her. It’s SO hard to do but I believe that’s how we should treat ourselves because if we can’t love & care for ourselves how are we suppose to love & care for others?! ?? . . #16weekspostpartum

The 33-year-old trainer has built a fitness empire off of her FIT Program—which combines workouts, a healthy meal plan, and mindfulness and motivation exercises. She’s also been regularly posting selfies since her daughter Mia’s birth in December, sharing her efforts to reclaim her pre-baby physique.

She’s been following her own program, and the progress definitely shows. But Emily revealed that her post-baby fitness journey hasn’t exactly been easy. “I’ve had a few hurdles that threw me off track—but that’s just life. I try to accept & adapt,” she wrote.

She also noted that she’s not immune to self-criticism:

Emily admitted that she’s asked herself “‘Why aren’t I getting leaner?’, ‘how come other people get back in shape quickly after giving birth & I didn’t?'” And sometimes she even lets negative people, who say she’ll never get her pre-pregnancy body back, get to her.

But the one way Emily brings herself back down to Earth is remembering to be just as kind to herself as she is to Mia: “Love myself the way I love her. It’s SO hard to do but I believe that’s how we should treat ourselves because if we can’t love & care for ourselves how are we supposed to love & care for others?!”

#3monthspostpartum ?? . I’m on the Central Coast (my home town) visiting my sisters new baby girl! ?? Our daughters are only 3 months apart! ??? . We’re only here for a couple of days so we’re cramming in seeing all of my family. My Mum and Nanny took Mia to spend some time with her while we did a super quick workout at the hotel gym. It’s was a great workout, I was so wrecked after it! It just goes to show you don’t need much time to get a great workout in! Even though I’m exhausted, I feel so much better after training! I never regret a training session!…. Ok that’s a lie, I totally regret running a month ago when I badly sprained my ankle! ?? . P.S. Did any of you Mum’s out there have loose skin on your belly like this? Does it go away or stay? I don’t care either way, just curious! ?? . . #goodfriday #emilyskye #fit #fitfam #fitmama #fitmum

She’s been sharing down-to-earth sentiments in other recent posts, too. In one selfie she shared about a week ago, she rejoiced in the fact that she’d put on a couple of kilograms .

“What I’m really happy about is the fact that my weight is INCREASING while I’m getting leaner! You know what that means?! I’m building muscle!” she wrote, sending the clear message that a higher number on the scale isn’t necessarily negative.

In another post, only about a month after giving birth, she’s wearing a two-piece and is using a resistance band by her pool with Mia in a carrier nearby, and candidly shared that it’s hard to fit in workouts when you have a newborn.

I did a resistance band workout today. Mia didn’t want to be away from me so I brought her outside with me so she could watch me. It worked out well because I got to give her kisses in between sets! ?? . It’s hard to get a workout in with a newborn who needs their mummy constantly but I fit it in when I can – as long as it’s not taking me away from Mia. . I’m feeling so good being able to exercise lightly! It reminds me why I started living this lifestyle in the first place (about 8.5 years ago). Being healthy and active makes me feel great! It helps with everything in my life – especially being a mother now. ? Bring on next week when I start my FIT Program with all the ladies in my FIT community! I’m so pumped! ?? Who’s joining us? ? . ✨ You can trial my FIT program for FREE for 7 days – click the link in my profile or go to: www.emilyskyefit.com ✨ . If there’s something you really want then find a way to get it! – It’s up to YOU! ??☺️ . . @emilyskye_ig . . . ??‍♀️ Workout videos: @emilyskyefitness . . . #5weekspostpartum .

As she notes in her latest post, despite the challenges, Emily is focusing on what she does have—a beautiful family and her health. And what could be more inspirational than that?