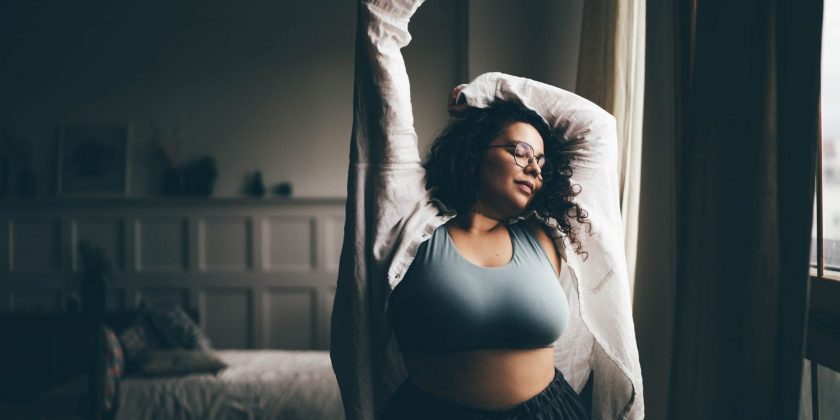 Fatigue is a form of debilitating exhaustion that’s linked to certain health conditions. But what does it feel like?

From fatiguing during a race to experiencing political fatigue, the f-word seems to be bandied around increasingly often these days. It’s come to refer to feeling jaded, done, over it. But for those of us who live with medical fatigue, it has a far more visceral meaning.

Fatigue is a form of extreme exhaustion and tends to be a symptom of chronic health conditions, such as endometriosis, Hashimoto’s disease and lupus. Being anaemic or deficient in vitamins such as B12 also causes fatigue, while chronic fatigue syndrome is a condition characterised by exhaustion so intense it makes you feel ill.

Exercise and chronic illness: “My autoimmune condition made me appreciate my workouts more than ever”

Fatigue isn’t a synonym for tiredness. You might be tired after a meeting or a poor night’s sleep; fatigue means being so exhausted that a nap won’t touch the sides. In fact, that’s why the chronic health community came up with the term ‘spoonie’; it’s all about illustrating just how difficult it can be for people who live with fatigue to recoup energy.

Fatigue is a type of exhaustion which rest doesn’t ease

Versus Arthritis describes fatigue as “overwhelming physical and mental tiredness that doesn’t significantly improve with rest or sleep”. So a person living with fatigue won’t wake up refreshed after a good night’s sleep; instead, they try to cope with managing crushing exhaustion that hinders completing even the most mundane tasks. While fatigue can make physical activities very difficult, it also impacts cognitive ability and is linked with brain fog and difficulty concentrating.

I know this because, as someone with two autoimmune conditions, one of the biggest symptoms I manage is fatigue. In my case, the fatigue worsens when I’m experiencing a flare-up of symptoms – after an illness or if I’m run down, for example. But, I live with a level of fatigue every single day and can’t remember a time when I didn’t.

Struggling to exercise? Quiet quitting your fitness regime might be the key to regaining motivation

How are fatigue and tiredness different?

The way I’d describe fatigue is like wearing an iron-weighted bodysuit while trying to climb a steep, rocky mountain. I put one foot in front of the other and feel the heaviness of every movement, persevering out of sheer determination.

You’re exhausted before you start something that may not seem tiring at all to someone without fatigue. Just getting out of bed in the morning can feel like a struggle, let alone trying to trudge through the day. During a flare-up, I feel bone-aching exhaustion that leaves my body weak and my brain frustratingly slow. It’s comparable to how tired you might feel if you’d run an ultra marathon and had no sleep, but you then still have to operate as normal. And often with no respite in sight.

Feeling run down? How to support your immune system when it’s running low

Sometimes just climbing the stairs or lifting shopping bags can be too much, yet trying to put this struggle into words while making the distinction between tiredness and fatigue is tougher still. I feel the fatigue manifest as weakness in my arms and legs, while causing a deep ache in my lungs too. Frustratingly, It can be impossible to articulate this fully to someone who hasn’t experienced the far-reaching impact of fatigue, which a single word can’t really sum up.

With that in mind, we’ve spoken to five women, who’ve shared how they’d describe living with fatigue:

“From a physical point of view, fatigue means you’re unable to push yourself to the limits you usually could without feeling utterly exhausted. When I’m experiencing a flare-up of my ulcerative colitis, this means a simple walk results in me spending hours in bed and still never feeling fully rested. It also causes mental and emotional exhaustion, and it can be so hard for people who don’t experience it to know the difference between fatigue and tiredness, which in turn can make those who live with this feel very isolated.” Teohna, 29, Northumberland

“‘For me, fatigue as a result of a malfunctioning endocrine system is like waking up with a hangover, but with none of the night before fun and frivolities. I had a total thyroidectomy eight years ago and have been on replacement thyroxine ever since, but I’ve never been able to shift the feeling of wading through mud on a daily basis. You adjust and learn to live with it, but I’d do anything for my ‘life with a thyroid’ levels of energy again.” Jess, 39, Bristol

“I have ulcerative colitis and dilated cardiomyopathy and find fatigue is like a dull ache that lives inside of me and my bones. A feeling of never quite having it together, there’s always that ache stopping you from quite being yourself. It affects all aspects of life and to live your life to the full, it requires some tough choices of where to put your energy. Some days I can’t even walk up the stairs and my legs ache just to move. It requires surrender and a lot of self drive.” Lucy, 36, Dorking

Women are more likely to live with migraines, particularly around their periods – here’s why

“Theoretical metaphors and descriptions are often useful to gently help others visualise and sympathise with a condition, but sometimes it’s essential to just be brutally honest. Fatigue feels like my bone marrow is hollow and replaced with a dull ache or vibrating with hurt. It’s not pretty, but revealing the reality is the only way to demonstrate and truly fight the stigma surrounding chronic illnesses.” Sophie, 37, Cambridgeshire

“I suffer from adenomyosis and anaemia, both of which cause me severe fatigue that is enough to stop me in my tracks, making it difficult to sometimes complete the most basic daily tasks. Add to that running a business, being a mum to three children under 10, my own personal fitness goals and it can all feel like too much. I do find eating healthily and always trying to include even the smallest amounts of movement into my daily routine works for me in trying to manage my symptoms and keeps me feeling positive and upbeat.” Rachael, 43, London

As these women have so intuitively highlighted, living with fatigue can feel lonely and exhausting in equal measures. There’s power and advocacy in raising awareness, which brings much-needed clarity to this often misunderstood symptom, making it far less isolating to navigate.