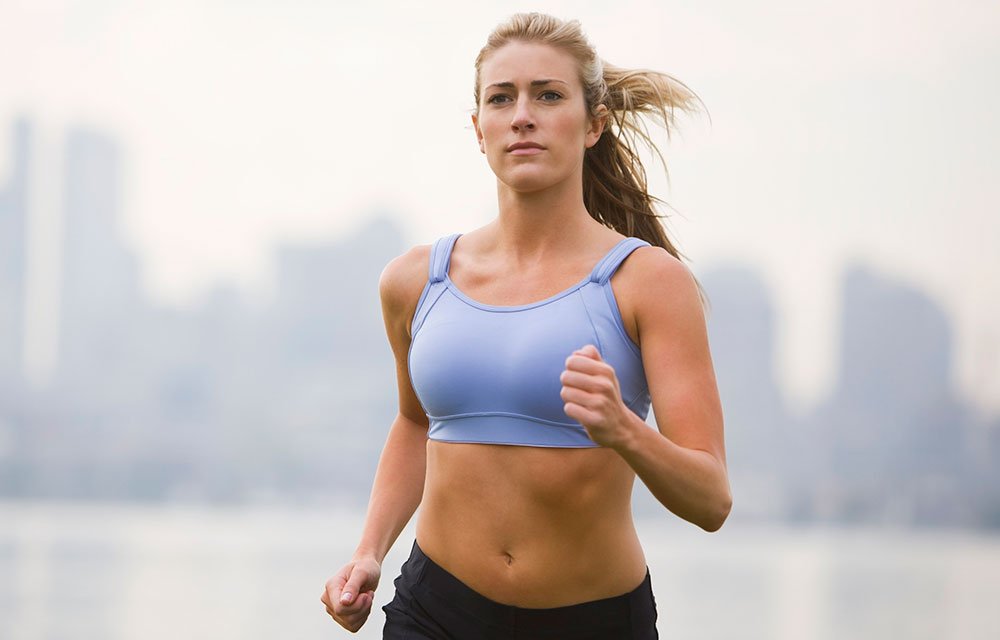 Breasts: They don’t do anything to help your running. They just hitch a ride and get in the way—requiring their own special equipment and in some cases, causing discomfort.

In a 2013 study of female runners at the London Marathon, 32 percent said they experienced occasional pain in their breasts. Of those, 17 percent sometimes cut back on their training because of breast pain.

But the news is not all bad. Researchers continue to study breast motion during sports, bra technology is improving all the time, and evidence is growing that running is one of the best things you can do to protect yourself from breast cancer.

Here’s what scientists know—and what runners should, too—about taking care of your pair.

“Depending on the size, they can be very heavy,” says Andrea Cheville, M.D., physical medicine and rehabilitation researcher and director of the Cancer Rehabilitation Program at Mayo Clinic in Rochester, Minnesota. “The body doesn’t support them very well. There’s not much to keep them stable and immobilised.” Just your skin and a few ligaments.

Other parts of the body are luckier. “If you think of something like the abdominal fascia, it’s just incredibly strong,” Cheville says. “You can run and your insides don’t jiggle around, because we have a strong, fibrous envelope. But that’s not true of the breasts. They have essentially no support. And yet they have pain receptors. And when the limited support elements are stretched, that hurts.”

RELATED: 9 Women Share How They Learned To Love Running

Michelle Norris, senior research associate in the department of sport and exercise science at the University of Portsmouth in the U.K., studies breast movement and tests breast support products in the lab.

To do so, she and her colleagues have women running on a treadmill bare breasted (bless those ladies), and then in low or high support bras. They use 3-D motion capture to look at the range of movement of the breasts.

“We have some very willing participants—and we owe them a lot,” Norris says.

In the lab, Norris and her colleagues have found that breasts move in a figure eight pattern. Not just up and down—that vertical movement is what most runners think of—but side to side and forward and backward as well. “[Breast is] just a mass of tissue, not a muscle,” Norris says. “It is not rigid structure. It can move in all three dimensions when we run.” And it does.

When you add all that movement in three planes together, Norris says, breasts—unsupported—move about 15 centimetres during running. (Different labs report different numbers, depending on the cup size of the cohort they’re testing.) About 50 percent of the movement is in the vertical, and then 25 percent is side to side movement, and the other 25 percent is anterior-posterior motion.

Regardless, that’s 15cm of motion with every stride.

With all that movement, female runners need support.

Shop carefully, the experts urge. Try on a lot of different bras. Get the best fit possible. Look for a specialty running store with a knowledgeable female salesperson. Buy a high support bra for running.

Some women prefer compression, others prefer encapsulation models. Doesn’t matter. The best bra is the one that you’re happy to wear.

“We’re all about bra fit here,” Norris says. “It is one of the most important facets for any woman in sport. We always say that it should be one that fits you extremely well and one you’re comfortable with.”

If you get one that hooks in the back, you should be able to wear it on its loosest fastening. As it goes through the wash and becomes looser, you can go to the tighter fastenings.

The lesson for runners: Don’t think if you’re going for a long, slow run, you can use a bra that is less supportive. You need a high support bra all the time.

Running in essence doesn’t shrink your breasts, Norris says. But the breasts are composed of fat and fibrous tissues. “So if a person is training and eating well and they’re reducing their overall body fat, it’s reasonable to think they could also decrease their breast size because they’re decreasing fat in their breasts,” she says. “It works more like decreasing their overall body fat instead of spot reduction.”

There are different kinds of breast pain—most of which are easily explained. But you shouldn’t ignore it. “Breast pain is pain,” Cheville says.

A lot of breast pain during exercise is from inadequate support—your bra falling down on the job. (See No. 4.) And, Cheville says, for large-breasted women, adequate support can be tough to find.

Many women are extra sensitive in their breasts in the days leading up to menstruation. It’s highly variable from person to person. If the pain is severe enough, you might want to pick a workout with less impact. “Recognise that this too will pass, and while you’re tender, take it easy,” Cheville says.

If you want to power through, it’s fine to use an over-the-counter anti-inflammatory. And watch the salt intake, which can lead you to retain water during the perimenstrual time, adding to the swelling in your breasts, she says.

Any unusual pain, see a doctor. “A small-breasted woman who has new onset pain, that’s harder to explain and more concerning,” Cheville says. “She should probably see a clinician.”

Recent research out of the Portsmouth lab has shown that breast comfort affects a woman’s willingness to run. It can be hard enough to get motivated to drag yourself out the door for a few miles. Without being conscious of it, you could be letting your breasts sabotage your workout plans. Says Norris: “If you pick up the wrong bra, you’re not going to go.”

A 2014 study showed running beats walking for breast cancer survival rates. Vigorous exercise was better than moderate exercise for the women in the study.

All the more reason to hit the road—with a good bra, of course.

Ready for a challenge? Sign up for the Sydney Morning Herald Half Marathon or The Sun-Herald City2Surf.

This article was originally published on Runners World.