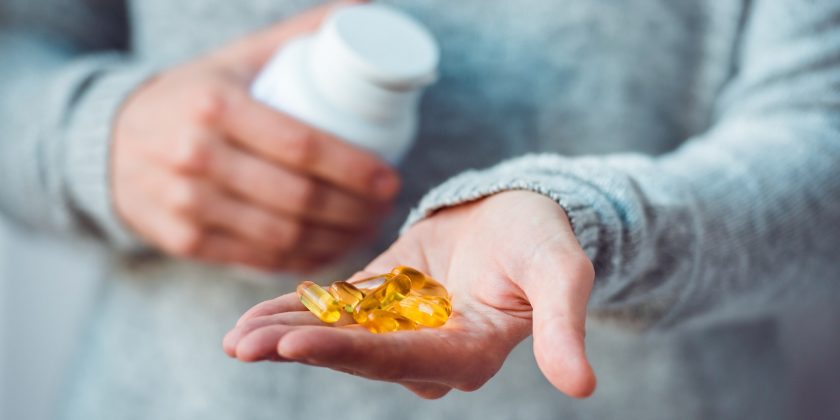 Fish oil has claimed top-tier supplement status in recent years. The pharmacy aisle darling’s mainstream popularity (it was the most popular natural product used by adults in the United States in 2012) has been buoyed by claims it can nurture everything from your brain function to your heart health. While the product has become haloed in an aura of general well-being, there is still a fair amount of misinformation out there about what exactly fish oil supplements can do for you, so it’s important to dissect what’s real and what’s not.

Perhaps you’re one of the millions of Americans who stocks your medicine cabinet with bottles of fish oil supplements but you’re not quite sure what you’re taking and why, or maybe you’ve yet to hop on the fish oil bandwagon and you’d like to learn more. We spoke to a couple of dietitians about what fish oil supplements are, how they can benefit you, who should take them, and more.

What are fish oil supplements?

Okay, let’s get a little technical for a minute here. Simply put, fish oil supplements are a way to increase your intake of omega-3 fatty acids. According to the National Institutes of Health (NIH), “Omega-3s are important components of the membranes that surround each cell in your body,” including cells in your eyes and brain, and play many roles in our health, such as supporting functions in the heart, lungs, blood vessels, immune system, and endocrine system. Basically, they’re incredibly important for a healthy human body.

The annoying thing is that our body doesn’t make omega-3s, meaning we have to get them from our diet, certified dietitian-nutritionist Gina Keatley tells Allure. “The issue is that there are only specific foods [like seafood and shellfish] that supply the two essential types of omega-3s," Keatley explains. These two omega-3s are EPA, which stands for eicosapentaenoic acid, and DHA, which stands for docosahexaenoic acid.

The third type of omega-3, ALA, alpha-linolenic acid, comes from plant sources, like flaxseed and canola oil. But the conversion rate of ALA into EPA and then DHA is pretty inefficient, according to the NIH. “Therefore, getting EPA and DHA directly from foods and/or dietary supplements is the only practical way to increase levels of these fatty acids in the body.” (Keatley notes there is also less research on ALA.)

For people who don’t eat any (or enough) fish and seafood — the FDA recommends two to three servings or eight to 12 ounces a week — there are fish oil supplements. Fish oil supplements are capsules containing oil derived from the tissue of fatty fish (like salmon, mackerel, or sardines), where high concentrations of EPA and DHA are found.

What are the health benefits of fish oil supplements?

If you took every fish oil headline at its word, then we’d truly have a miracle pill on our hands. In reality, the research is a little all over the place. “The challenge that can come with any supplement is that newer studies may contradict earlier studies on the benefits,” says registered dietitian nutritionist Kristin Kirkpatrick, continuing “[Omega-3s] are a great example of this.”

Take heart health, one of the areas where the most research regarding fish oil has been done. Kirkpatrick says the research is clear that omega-3 fatty acid supplements can help reduce triglycerides, “which can contribute to hardening of the arteries or thickening of the artery walls (atherosclerosis) which increases the risk of stroke, heart attack, and heart disease,” Keatley explains. However, Kirkpatrick also points out that “recent studies have come out questioning the benefit to heart health and reducing the risk of myocardial infarction or heart attack.” In other words, there is good research showing these supplements can reduce your triglyceride levels, but whether or not they ultimately lowers your risk of negative health events is debatable.

Another commonly touted benefit is an anti-inflammatory impact, an area where Kirkpatrick sees some of the most convincing evidence. Inflammation in the body is linked to a number of illnesses and poor health outcomes, including heart disease and rheumatoid arthritis. Studies demonstrate that omega-3s help reduce inflammation on a cellular level. Teasing out how that effect enacts itself in the body is trickier. According to the NIH, clinical trials suggest fish oil can help people manage their rheumatoid arthritis — by, say, decreasing their need for pain meds — when taken along with their regular medications.

There are a few more inflammation- and aging-related conditions that some research suggests could be helped by fish oil supplements, maybe most notably age-related macular degeneration, according to Keatley. Studies show people who get a lot of omega-3s in their diet may be less likely to develop age-related macular degeneration in the first place — although supplements are not shown to slow it down once it starts, according to the NIH.

When it comes to brain health, especially in aging adults, the evidence is promising but again disappointingly spare. “Some people believe that fish oil supplements can improve memory as well as prevent brain or nervous-system related issues such as Parkinson's and multiple sclerosis, but the research is not clear on these ailments,” Keatley says. However, some studies have suggested that omega-3 consumption lowers your risk of developing cognitive function issues like Alzheimer’s disease or dementia.

Who should be taking fish oil?

If you are vegetarian or vegan or you just don't like eating seafood, then you may be lacking in omega-3s and could stand to benefit more than most. (Kirkpatrick notes that for strict vegans, there are plant-based sources of omega-3s derived from things like algae.) Pregnant and breastfeeding women might also want to consider supplements if they are not eating at least the recommended 2 to 3 servings a week. Kirkpatrick says that these fatty acids are essential to the healthy brain development of babies.

“EPA and DHA are important for the normal development of the brain, eyes, and nerves in children under two years old,” Keatley explains. While the NIH says it is unclear if supplementation during pregnancy and breastfeeding has any effect on children’s development, it also says that, “some studies show that taking these supplements may slightly increase a baby’s weight at birth and the length of time the baby is in the womb.”

If I eat fish regularly, do I need fish oil supplements?

No, not necessarily, says Keatley. “If you are eating at least 250 to 500 mg of combined EPA and DHA each day via fish and shellfish, then you're in the clear,” she explains. Further, she adds that you should avoid taking supplements unless they're prescribed by your physician.

In fact, making fish a regular part of your diet is actually preferable to taking supplements, similarly to how getting vitamin C and fiber from real whole fruit is generally better than taking them in pill form. “I can't speak for all dietitians, but most of those I know are pro-real-food before going down the supplement route,” says Keatley. In fact, Kirkpatrick says she always tries to recommend food over supplementation to her clients.

The idea is that there could be other beneficial nutrients in real fish that you’re missing out on in pill form. For instance, while people who regularly eat fish have a lower risk of developing several chronic diseases, “it is not clear whether these health benefits come from simply eating these foods or from the omega-3s in these foods,” the NIH reasons.

Is there such thing as taking too much fish oil, and are there any side effects?

Actually, yes, although it’s hard to do. “For a healthy person, there is little evidence that overdosing is common,” says Kirkpatrick. If you do go overboard with the fish oil, the side effects are relatively mild. “They include unpleasant taste, bad breath, bad-smelling sweat, headache, and gastrointestinal symptoms such as heartburn, nausea, and diarrhea,” Keatley says. Even if you don’t ingest enough to cause you problems, though, taking excessive amounts of fish oil is likely a waste of money. “The most recent research seems to show that there is a point of diminishing returns where more omega-3s do not provide increased benefits,” Keatley explains. More is not always better.

Is there anyone who shouldn’t be taking fish oil?

Yes. Large doses of omega-3s may cause bleeding for those with an already-elevated risk. “Many older patients on blood thinners should not be put on omega-3 supplementation due to risk of bleeding,” Keatley explains.

If you're seeking to up your intake of omega-3s through supplementation, there are plenty of options, but Nature's Bounty Odorless Fish Oil Softgels have fantastic reviews. You can pick them up at your local Walgreens or get them on Walgreen's website for $21. The Vitamin Shoppe's Omega-3 Fish Oil Softgels will also do the trick, and you can grab those at a brick-and-mortar location or add them to your online cart for $16.