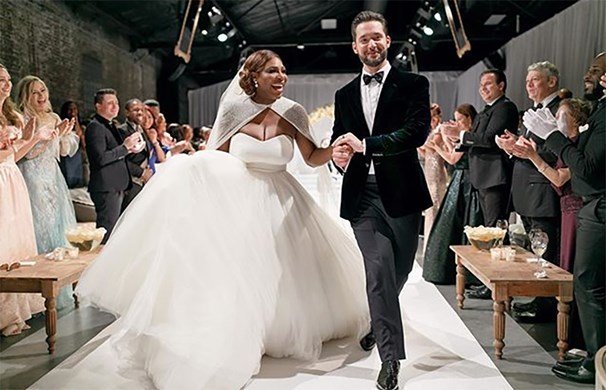 The tennis star and Reddit co-founder, who recently became parents, exchanged vows in front of their friends and family, including Beyoncé, JAY-Z, Kim Kardashian, Ciara and Eva Longoria.

According to Entertainment Tonight, the wedding was Beauty and the Beast-themed and guests were asked to dress accordingly.

For the ceremony, the bride wore a dress and cape by Sarah Burton for Alexander McQueen, before changing into two different reception looks by Versace, which she accessorised with bejeweled Nike sneakers. The bridesmaids (including Serena’s sister Venus) wore convertible gowns by Israeli-based designer, Galia Lahav.

Their newborn daughter, Alexis Olympia Ohanian, was also in attendance.

Below, see all of the photos from the celebrity wedding of the year.

@serenawilliams: You are the greatest of all time, not just in sport–I’m talking about as a mother and as a wife. I am so excited to write so many more chapters of our fairy tale together. And my whole life I didn’t even realize it, but I was waiting for this moment. And everything that I have done, everything that I am so proud of in my career, and in my life, for the last 34 years, pales in comparison to what we’re doing today. And I am so grateful, and I am so in love. ? @mistadubb @ericamelissa_