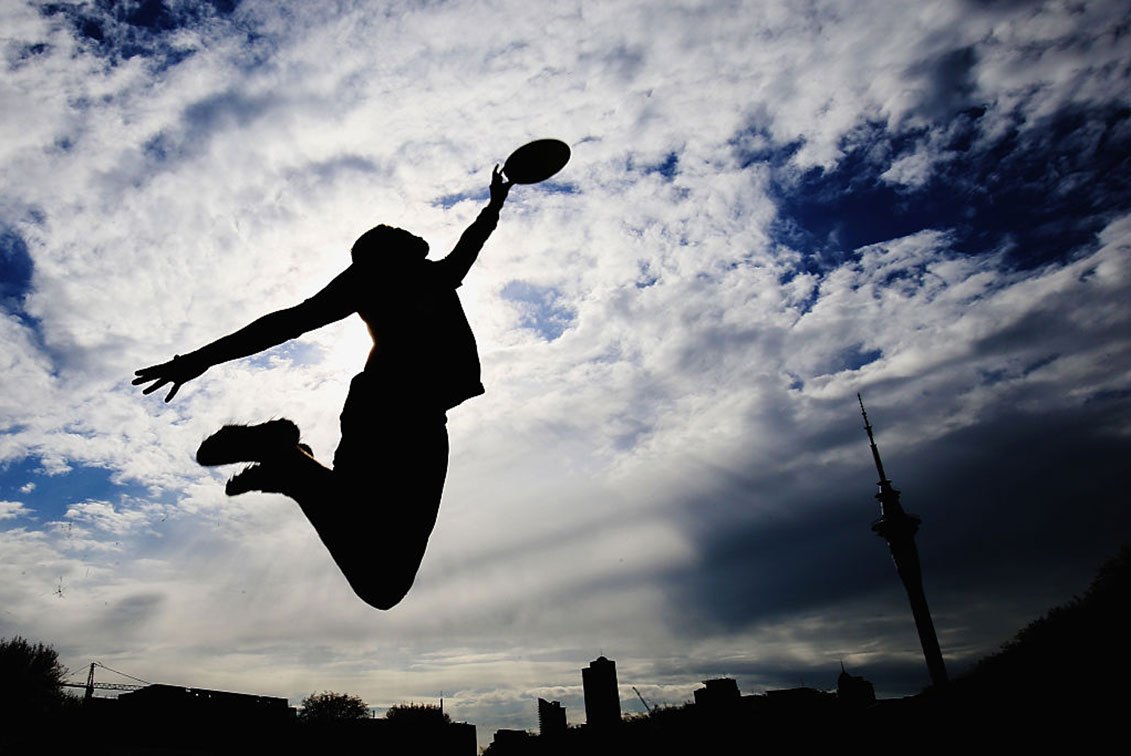 Cat Phillips (Instagram: @catphill35) is one of those multitalented megastars who plays two sports: AFL and Ultimate Frisbee. In the inaugural AFLW season just gone, she played for Melbourne FC. But get this – until early 2016 she had never played football and could hardly kick a ball.

She’d been playing elite Ultimate Frisbee for a while though, and her athleticism wowed the AFLW selectors. So Ultimate Frisbee must be a sport that can get you pretty fit. Since the season ended, she’s back at focusing on her Ultimate, a team sport where points are scored by passing the frisbee to a teammate in the opposing end zone.

You can watch Phillips and her team play in the first ever International Test Match for Ultimate Frisbee in Sydney and Melbourne on19th and 21st May! More details at end. We chat to her ahead of the matches…

What do you love about Ultimate Frisbee?
Ultimate frisbee’s a really unique sport – first and foremost, it’s entirely self refereed at all levels of competition. This means that the players are required to call their own fouls, communicate with the opposition, and commit to a very spirited and fair-minded style of play. This contributes to an incredible culture of respect throughout the sport, which is something I really love about it.

I also love the way the game is played, and the combination of skills and athleticism that is required to be elite. At a very high level, Ultimate is as physically taxing as any other sport I’ve ever played, which really drives me to keep getting fitter and stronger. At the same time, I love the challenge of being able to execute difficult throws in rain, hail or shine.

Would you encourage other women to give it a go?
Yes! Ultimate Frisbee is an ideal sport for a whole range of women. It suits women wanting to just get a bit more active, those looking for a social weeknight sport, or those interested in a really competitive sporting environment. It’s non-contact, single gender or mixed, cheap, and a really good workout, so there really is something for everyone.

Ultimate Frisbee isn’t a common sport – how did you get into it?
I started playing Ultimate in year 10 when my sister Michelle picked it up at uni. She convinced me to come along to a couple of training sessions after school, and I quickly fell in love with the sport.

How did you start competing?
I was really lucky that I was given a lot of opportunities to compete at a high level very early on. My first major tournament was the Australian Ultimate Championships, with a newly formed Victorian club team that Michelle was also playing for. After about six months of playing, I was also selected for the Australian under-19s team to compete at the World Championships in Vancouver. That was in 2008.

And how did you start playing AFL?
I attended one of the AFL’s Talent Identification days early last year with a bunch of girls from my Frisbee team, mostly just thinking it’d be a fun activity we could all do together. I’d never played football before, could hardly kick a ball and didn’t really expect anything to come from the day. I did pretty well in the athletic testing, and was invited to be a part of AFL Victoria’s female academy, which was designed to prepare players for the 2017 AFLW season. I trained with the academy for a month or so, and at the same time started training fully with the Melbourne University Women’s Football Team.

I was really lucky that Melbourne Uni has such an elite playing and coaching group, which really fast-tracked my development and gave me excellent opportunities to learn from the best players around. I played my first game of VFL football with Melbourne Uni in July, and from there, was contacted by Melbourne FC and offered a Rookie playing contract for the 2017 AFL Women’s season.

sun smart and ready to go with some hot footy in darwin. ?? dees vs crows – catch it on @channel7 and @foxfooty tonight 7pm ???‍♀️? #myheartbeatstrue #dreambigger #crocs

Incredible! And back to the Frisbee – how can other women get involved?
The easiest way to is through your local weekly league. These are made up of people of all ages and skill levels. I started playing at a league in Melbourne as a 16-year-old beginner with no frisbee skills, and I still play there now after 10 years and six World Championships. It’s a great way for either individuals or teams to get involved. Find info on each state organisation’s website (Ultimate Victoria, NSW Ultimate, SA Ultimate, etc), or at the Ultimate Australia website: afda.com.

There are also a number of competitive club teams around Australia that start pre-season training in October, in preparation for the National Championships in April each year. These teams are always looking for new players to get involved, and generally have a number of events throughout the year that are open for anyone to come along to. The team I play for, Ellipsis, posts information about training and competitions on our facebook page (Ellipsis Ultimate) and our website (http://ellipsisultimate.com/).

Show your support for #womeninsport, people! Phillips and her team will be competing in Sydney for the Japan/Australia Test Match on Friday May 19, 2017, at 7:30pm, and in Melbourne on Sunday 21st May, at 11:30am (testmatch.ultimatefrisbee.org.au/en_au). This is the first ever International Test Match for Ultimate Frisbee!