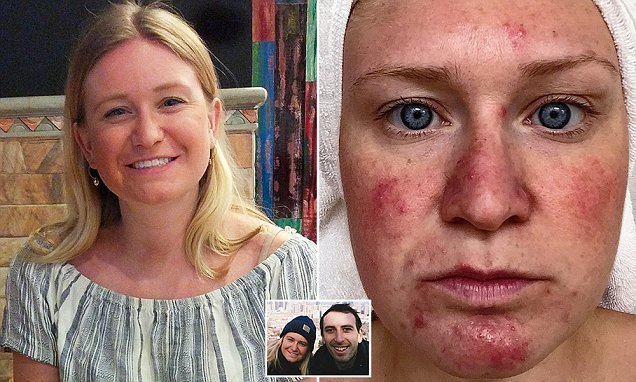 Woman, 29, who cancelled dates with her boyfriend and took days off work because she suffered from red, painful skin, reveals a cream made with capers has rescued her face

A woman who suffered with problem skin for eight years has revealed how it became so bad she had to take days off work and cancel dates with her boyfriend.

Emma Scholz, 29, was told she had acne in her early 20s but no medication she was given cleared up her sore, red and sensitive skin – it just made it worse.

A second dermatologist then told Ms Scholz, from London, she had severe rosacea, a common rash affecting the face but more commonly diagnosed in older people.

After trying years of different creams and treatments with no success, Ms Scholz’s skin became so bad she was sometimes too embarrassed or in too much pain to even leave the house or to see her partner, Florian.

Having had no luck with doctors she turned to internet forums to find out what other people with the condition had tried.

She discovered Kalme skin products, £19.95 creams made with Mediterranean flower buds, capers, and says she hasn’t looked back since.

Ms Scholz said: ‘My rosacea hasn’t gone, it never will, but now it doesn’t rule my life and I feel in control of my skin.’ 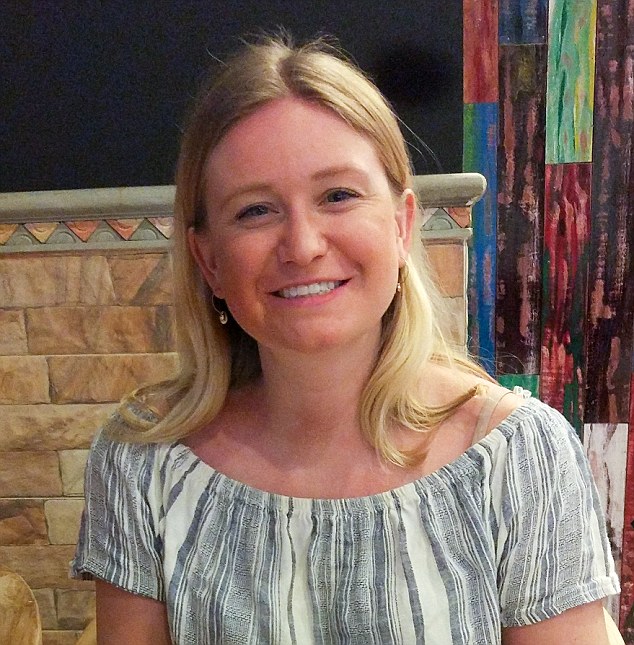 Ms Scholz says her rosacea started suddenly when she was 20 and, after a lifetime of good skin, she thought it was because she was living in Spain at the time and put it down to acne from the heat and sun cream.

Ms Scholz, an IT consultant, said: ‘From that day, it just got worse and worse.

‘First it was the soreness and the dryness, then the redness and then came the bumpiness and the intense itching, usually in that cycle.

‘It started just in my cheeks but within months it had spread over most of my face and down my neck.

‘I tried all the usual treatments for acne like anti-bacterial washes but all these products just made my skin worse. 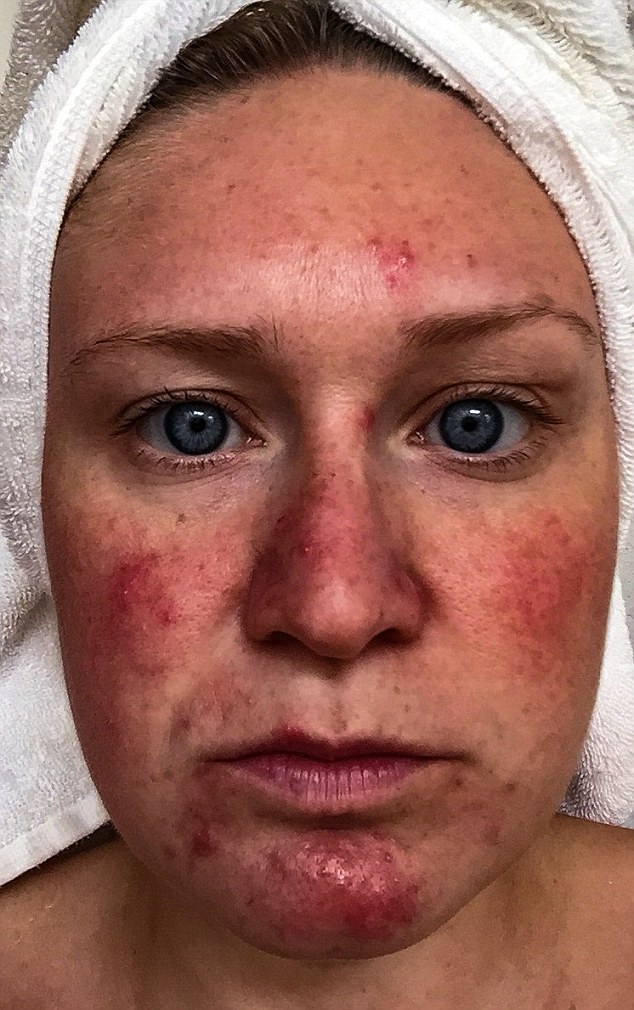 Ms Scholz suffered with red, bumpy skin for eight years before finding a successful treatment, and was misdiagnosed with adult acne

‘My skin felt ultra sensitive and very reactive so I switched to products for sensitive skin as opposed to acne to see if that worked. It didn’t, my skin still carried on getting worse.’

By this time Ms Scholz’s face was red almost all the time and it was painful for her to put on makeup.

However, she was so upset with how it looked she took the pain because she couldn’t bear to be seen in public or at work without cosmetics – but this just made the problem worse.

Acne cream ‘stung like hell and made my skin furious’

After years of trying different treatments Ms Scholz went to a dermatologist for a professional opinion, and was diagnosed with adult acne.

‘The first dermatologist I saw prescribed an acne cream,’ she said.

‘It stung like hell and made my skin furious. I carried on anyway hoping it was just my skin adjusting to the treatment, but it became so painful I had to stop using it. 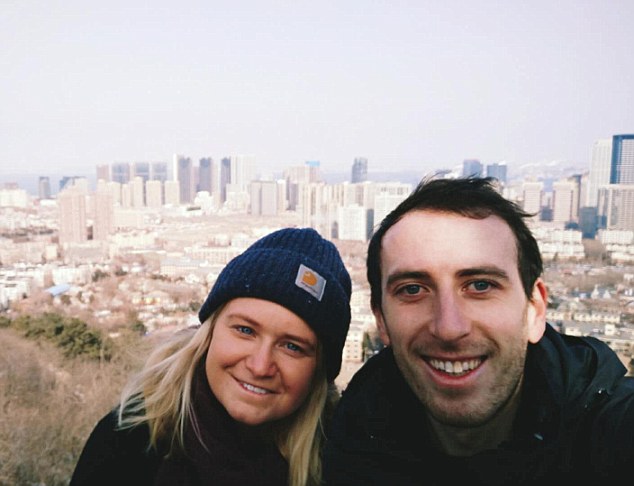 Ms Scholz, 29, tried years of different solutions for her bad skin but said none help to calm the pain or redness

‘I felt having tried so many acne treatments that this diagnosis just wasn’t correct, so I sought a second opinion.

‘The second dermatologist immediately diagnosed me with rosacea.’

Ms Scholz was told she may have been diagnosed wrongly because she is young, and most people don’t develop severe rosacea until they are nearing middle age.

Rosacea is common but not well understood

The condition is common but not well understood – it is thought to be caused by problems with blood vessels in the face, or a reaction to microscopic insects which are often found on the skin.

Triggers might make skin flare up particularly badly, such as sunlight, stress, exercise, alcohol and caffeine or spicy foods. 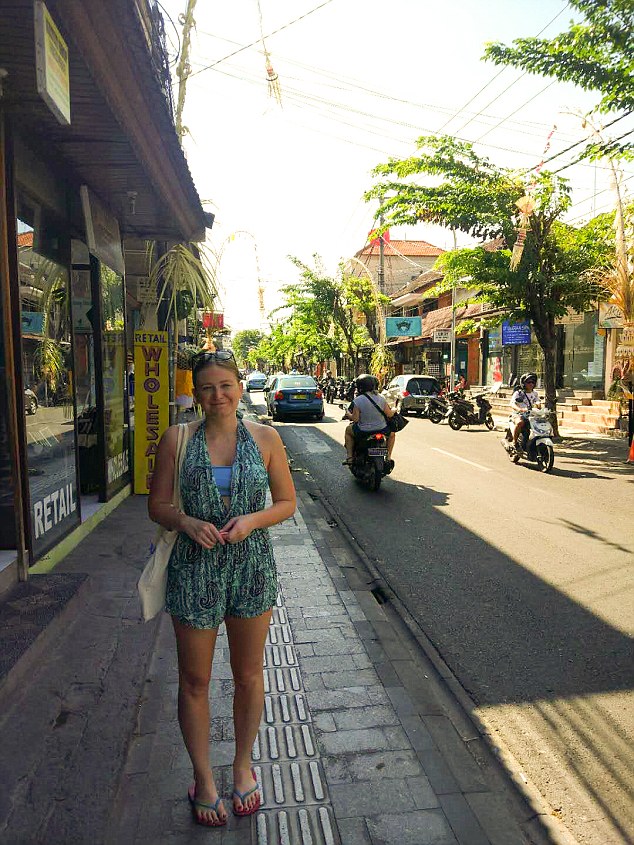 Ms Scholz, who was living in Spain when her skin started to get bad and now works in China, enjoys travelling, but says she used to dread going to new climates 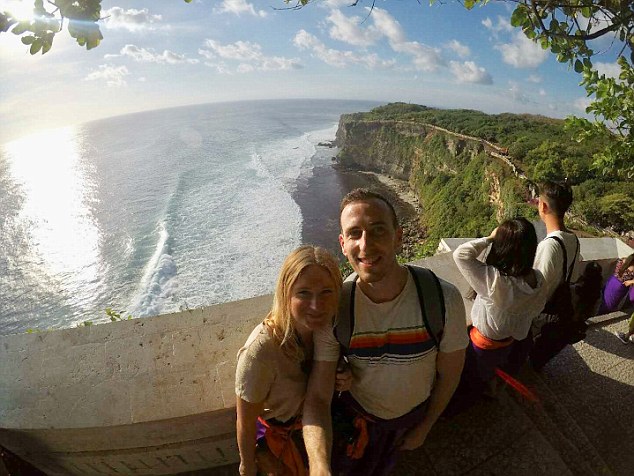 Ms Scholz (pictured with partner Florian) said: ‘There would sometimes be days when I simply didn’t leave the house as my skin felt so raw and painful I just didn’t want to go outside’

There is no known cure but avoiding these triggers can help to relieve symptoms, as well as skin creams and gels.

‘Some days my skin got so bad I was unable to go to work because my face was so painful I could barely speak.

‘I’d have to just stay at home in the cool and try and calm my skin down with cold flannels.

‘There would sometimes be days when I simply didn’t leave the house as my skin felt so raw and painful I just didn’t want to go outside.’

Ms Scholz says she became so depressed about her condition that her friends and family began to worry, and that she was in denial about how bad it was.

Cancelled dates with partner when skin flared up

In 2015 she met her partner Florian during a time when her skin was calmer – although she still did not let him see her without makeup – but when it flared up she cancelled dates because she was so embarrassed.

Ms Scholz says she felt unable to speak to anyone except her dermatologist about the problem. 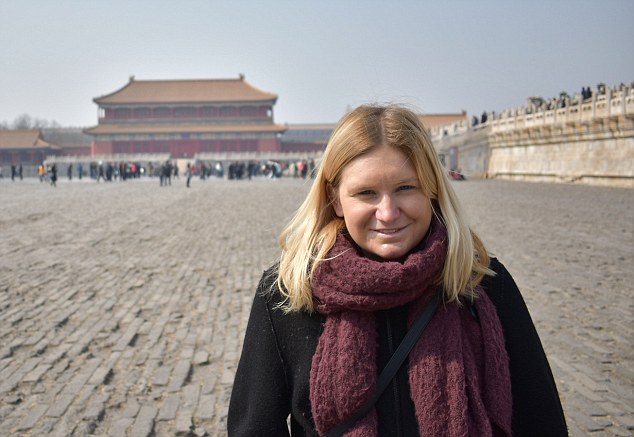 Ms Scholz, an IT consultant, now feels happier and more confident in her own skin after using Kalme’s products which contain capers

She continued: ‘It felt as if no one could help me so I decided to take matters into my own hands.

‘I hadn’t tried anything “alternative” for my rosacea, believing firmly that the medical route was my best hope of a cure.

‘So I did what I probably should have done a long time before and I began reading blogs and support groups written by and for people with rosacea.

Rosacea is a common rash that affects the centre part of the face, usually in middle-aged people.

Sufferers are more likely to blush easily, which is followed by persistent redness, bumps and pus spots.

The cause of rosacea is not fully understood.

Many think it occurs due to blood vessels beneath the skin dilating too easily.

It is more common in fair-skinned women.

Are there other symptoms? And how is it treated?

As well as affecting their appearance, rosacea sufferers may also experience:

There is no cure.

I tried Kalme products and haven’t looked back since

‘Products that kept popping up and always with very detailed and convincing reviews were Kalme products.

‘So many accounts mirrored my own experiences with rosacea, their symptoms, what medications they had tried, that I decided to try the Kalme products for myself.

‘That was just over a year ago and I haven’t looked back since.’

Kalme’s products contain an extract from capers, a flower bud which grows in the Mediterranean.

In the past there has been scepticism about whether capers work for rosacea, but experts acknowledge they can reduce inflammation.

No scientific evidence it works, but it’s ‘plausible’

Dr Anton Alexandroff, a British Skin Foundation spokesperson said: ‘There is no scientific research that capers improve rosacea in patients at present.

‘However there is scientific data that capers can suppress inflammation and vasodilation [widening blood vessels] in general, which are two major mechanisms of rosacea.

‘It is therefore theoretically plausible that capers may help to treat rosacea but further research is required to confirm this.’

Ms Scholz claims the products worked for her within weeks.

‘Within two weeks I started to see a significant improvement in the state of my skin,’ she said.

‘Firstly, the itching decreased along with the dryness. The redness and bumps were still there but my skin felt less sore and softer.

‘My skin has improved about 90 per cent’

‘Then after about four weeks the bumpiness and the redness started to really decrease.

‘The relief I felt is indescribable. I have been using the Kalme products for a year now and I would say my skin has improved about 90 per cent. 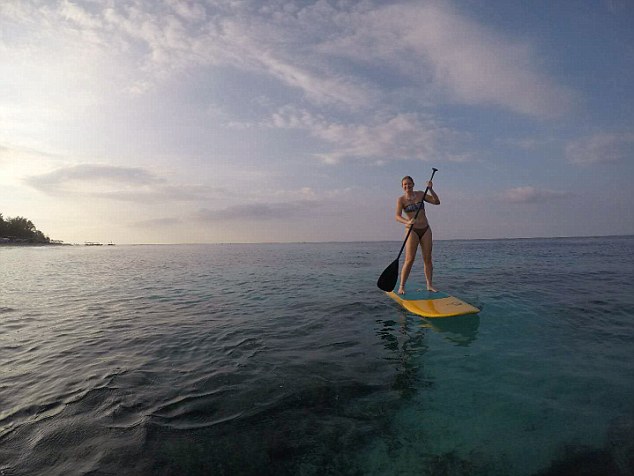 ‘My rosacea hasn’t gone, it never will, but now it doesn’t rule my life and I feel in control of my skin, which has drastically improved my quality of life,’ Ms Scholz said

‘Even when I have a flare up they are nowhere near as bad as they used to be and go away within a few days.’

Ms Scholz, who is now living in China for work, says improving her skin has had knock-on effects on the rest of her life and she now feels happier and more outgoing.

She added: ‘I’ve got so much more confidence now I barely have to think about my skin. I can go to a party or a social event and never worry. I’m even sleeping better now as I think I have less anxiety.

‘My rosacea hasn’t gone, it never will, but now it doesn’t rule my life and I feel in control of my skin, which has drastically improved my quality of life.’