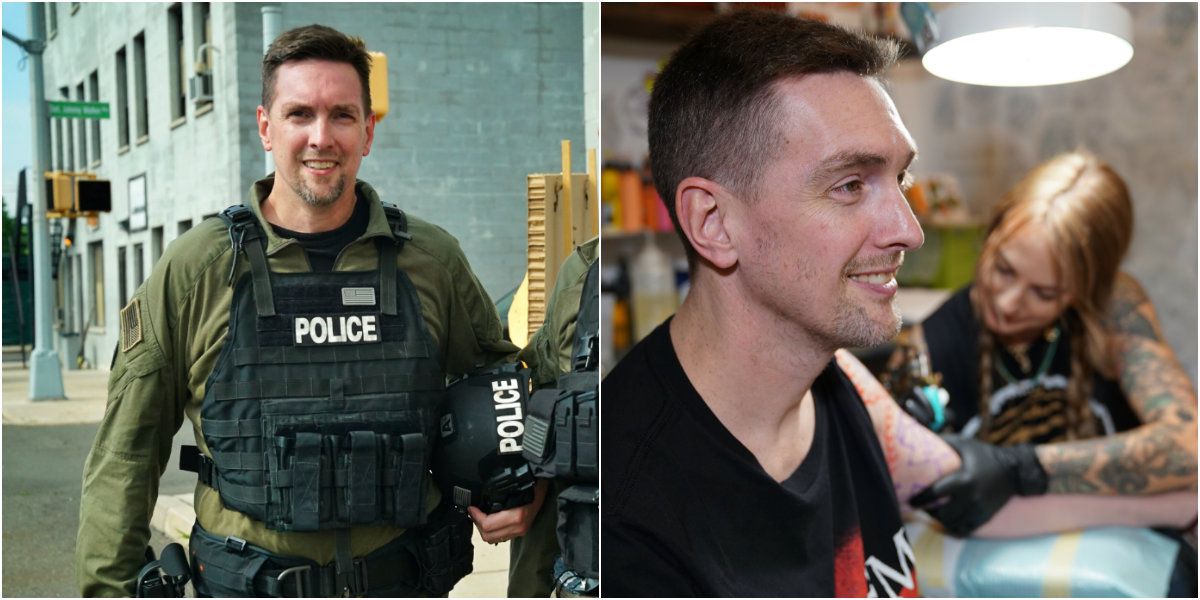 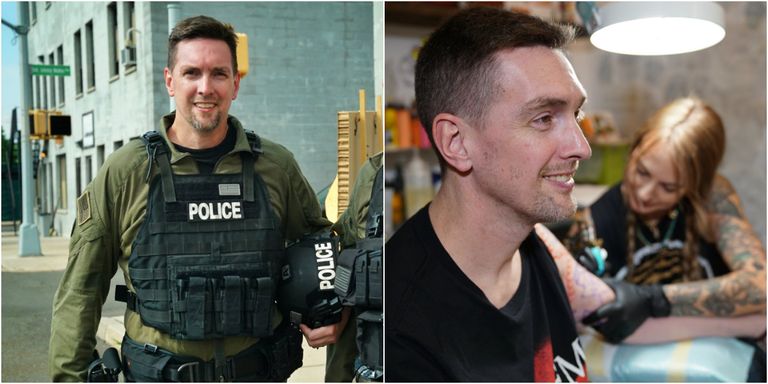 Johnny Walker, 45, has been a NYPD officer since 1997. On September 11, 2001, when the Twin Towers fell, Walker and almost every cop in the city worked for days without rest at Ground Zero. All told, Johnny spent more than 400 hours “on the pile,” clearing debris, trying to rescue survivors, and retrieving bodies of the victims.

Like many first responders, the horrific conditions at Ground Zero changed Johnny’s life forever. Years after the pile was gone, and the Freedom Tower in its place, Johnny contracted invasive adenocarcinoma of the colon, a life-threatening form of colon cancer. Emerging research has suggested that there is a possible link between cancer rates among 9/11 first responders and exposure to certain chemicals at Ground Zero, though more research is needed to support these findings.

As Walker fought the disease, he heard about Everence, a startup that offers people the option to pay tribute to their loved ones by inking their DNA on their skin. Walker sat down with Men’s Health to share his story, and why he chose to make his body a monument to the people in his life.

This interview has been condensed and edited for length and clarity.

The morning of 9/11, I was out like a light. It was supposed to be my day off. I remember my wife, Jessica, came into the bedroom and told me that a plane had just hit one of the towers. I kinda just rubbed my eyes, thinking, “Ah, crap, that’s going to be a mess, especially for all the guys downtown.” So I figured I would get up to check the news out, and by the time I got into the living room, my wife screamed, “Oh, my god, another plane.” And then I realized, holy shit, this wasn’t an accident. I told my wife, “I’m sorry, but I gotta go to work.”

It was complete chaos that first day. Guys were running all over, commandeering city buses to get downtown. We just grabbed whatever we had and got down there and started cutting through rubble, trying to pull people out. Everyone was covered in dust, constantly. You’d start digging in one part of the pile, load stuff into a bucket, and pass it down. One of the things I remember is as you were passing the buckets along, you’d see body parts. That was a pretty eerie feeling — looking down, and seeing a hand in the bucket, realizing that was part of a person.

After three straight days, I made it home. I remember stepping out of the shower and seeing my wife, and I just started crying as it all hit me. All that work took a toll. I couldn’t sleep, so I just headed right back to the precinct.

“I just started crying as it all hit me. All that work took a toll.”

In August of 2015, I went into the hospital for what doctors thought was diverticulitis. After rounds and rounds of tests and a laproscopic operation, I came into the recovery room with a scar that looked like a zipper going from my chest to my groin. After the surgery, doctors told me that it turned out to not be diverticulitis. It was colon cancer, but they’d caught it early. Then the pathology came back, and it turned out they hadn’t caught it so early. Now all of the doctors started talking about Ground Zero, and they thought it was connected to my time on the pile.

Fortunately, the lieutenant from employee relations pulled some strings and got me into Sloan Kettering right away, and, thank God, the WTC health program picked up all the medical costs. The guys from my team were there ’round the clock to help with everything and anything. They even helped decorate my house for Christmas to cheer me up.

The treatment was torture. I had every side effect possible, and even when I thought it was all over, it wasn’t. In June of 2017 cancer reared its ugly head again, and it had spread. I have two new tumors on the lymph nodes near my spine.

When I first heard about Everence, at first I was like, “Dude, that is a little creepy.” They take your family’s DNA with a cheek swab and put it into tattoo ink. But when I started to think more about it, it made sense. When I went out on the job, I kept photos of my wife and kids in my hat, and when I wasn’t wearing the hat, I’d slip the stack of wallet-size photos in a little pocket on the inside of my body armor, just to have something physically close to me. This is kind of the same thing.

“I know that wherever I go, I’ll have my family with me.”

I spent months deciding what I wanted to get. I ended up deciding on four designs, which I got done at SAVED Tattoo in Brooklyn earlier this year. For my son, Jack, who’s a freshman in college right now, I got the Templar Solar Cross, which represents mental health and fortitude. For my daughter Bella, I got a Shield Cross, another Templar symbol for protection from evil. For [my NYPD partner] Liam, I got the Two Riders, the seal of the Knights Templar, which symbolizes true brotherhood. And on the inside of my arm is basically the oldest symbol for man and woman, the blade and chalice, which has my wife’s DNA in it.

Man, when they put my wife’s Everence in, I teared up. It wasn’t from the pain of the needle. I remember holding my wife’s hand, and a wall of emotion just opened up and I started crying my eyes out. It wasn’t the pain, it was the emotional attachment I felt to my wife, in that moment.

Prior to meeting Patrick Duffy [the founder of Everence], the only time I’d ever talk about 9/11 was once a year, when we’d get together to raise a drink in honor of those who died. You know how cops are — we don’t really like to talk about our feelings. It’s one of the things we have to do in the law enforcement community: put our emotions aside and be able to do our jobs. When it’s all over or you get home and you get a chance to take a break, it’ll hit you like a ton of bricks. Processing my fight with cancer has been a lot like dealing with what I went through on 9/11 — both experiences changed my life and who I am completely.

Now the doctors say that I will have cancer for the rest of my life, and that I’ll have to go through chemo again indefinitely. Each time I’ve gone in for treatment, I’m stuck in a room by myself. I think: “Man, I may be going somewhere else. The big man may be calling me home.” It’s kind of a scary thought, but now I’m not as afraid, because I’ll have my family with me on my skin: my wife, my kids, and my brother from work.

Everence is tangible. It’s physical, it’s there. Wherever I am, I can just look at my body, and say, “Here’s my wife, there’s my daughter, there’s my son, there’s my partner.” It’s hard to describe that confidence, that feeling that it gives me. The thing that nobody wants to talk about is the fear of death. Right now, we’re just hoping for a period of remission, and maybe a miracle or two. But I know that wherever I go, I’ll have my family with me. I know they’ll be there with me in the room, where I can just reach out and touch them.