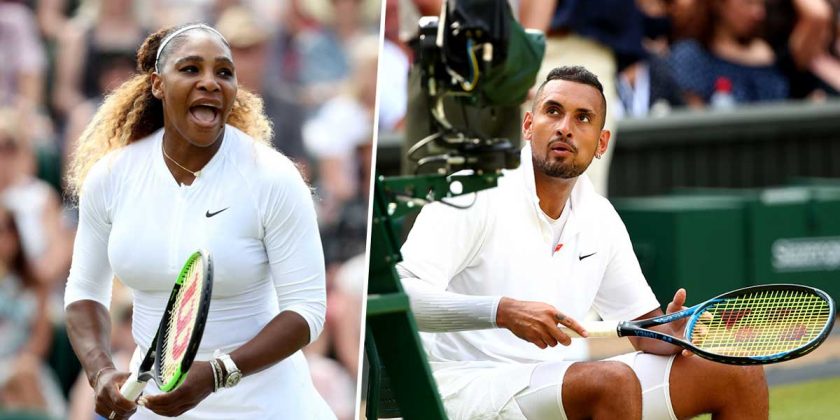 Tennis is hardly the only sport where players regularly trash talk referees and opponents—but it does have an impressive legacy of tantrums, enough that there’s a highlight reel of the worst meltdowns. Like, for example, at the French Open in June, when a frustrated Roger Federer caused a minor panic when he whipped a ball into the audience. Or, shortly thereafter, when Spaniard Mario Viello Martinez suffered a series of setbacks and dealt with it by destroying his racket.

But if there was an award being handed out for poor sportsmanship on the court in 2019 so far, Nick Kyrgios might win the gold. This spring, the Australian player was disqualified from the Italian Open following a profane tirade that concluded when he threw a chair. Most recently, Kyrgios got into a spat with umpire Damien Dumusois during his match against Rafael Nadal at Wimbledon. After receiving a code violation for insulting the ump, Kyrgios lobbed a series of belittling slurs. “You’re a disgrace…You’re a joke. People like you are the problem,” he said to Dumosois. Later: “You think you’re important. It’s very cute, bro…You have no idea what’s going on.”

Call it an outburst from a high-strung athlete or call it an eruption of machismo—either way, it’s a central part of Kyrgios’ persona, and an attitude that has cemented him into the Bad Boys of Tennis Club. Sure, there have been (literal) penalties in some instances. But, for the most part Kyrgios continues to get away with it without lasting effects, courtesy of a specific type of leeway that is exclusively reserved for men.

Case in point: Last summer, Serena Williams threw a “fit” (and a racket) during her Grand Slam match against Naomi Osaka. Like Kyrgios, her ire was directed at the umpire, whom she claimed “stole a point” from her with what she considered to be an unfair call. Williams was incensed by a perceived insinuation that she was cheating, and her game devolved from there. Ultimately, she lost.

In the aftermath of that match, she was criticised for her emotional response, as she had been when she became upset during games in the past. Detractors characterised her behaviour as unprofessional and bratty and, within days, a racist, sexist cartoon of Williams stomping on her racket began circulating around the internet. Frustrated, Williams fought back: “Do you know how many other men do things that are much worse than that?” she pointed out. On Twitter, tennis legend Billie Jean King also raised that point, thanking Williams for calling out the double standard and adding: “More voices are needed to do the same.”

Unfortunately, however accurate and important that call to action may be, it has not yet culminated it its desired effect. If it had, we wouldn’t still be having the same debates over and over again. The battle of the sexes—in tennis, and countless other spheres—wages on. That there is a double standard for men and women when it comes to emotional expression is a fact so deeply enmeshed in our cultural fabric that it’s hard to know where to begin pulling the thread.

Men are confident; women are conceited. Men are authoritative; women are bossy. Men are passionate; women are hysterical. The dyads go on and on, as applicable in the workplace and domestic realm as they are in the sports world. Some might prefer to say that professional tennis has a problem with aggression on the court, and maybe that’s true. But it also has an undeniable problem with how it treats men and women differently.

For Williams, the turmoil didn’t end after the game, or even after the press died down. In a recent essay for Harper’s Bazaar, she wrote about how the response to her reaction at the Grand Slam had a continued affect on her emotional state. At night, questions churned in her head: “What could I have done better? Was I wrong to stand up?” Clarity finally arrived in the form of a note from Osaka, the young player who had won that day. “People can misunderstand anger for strength because they can’t differentiate between the two,” it said. “No one has stood up for themselves the way you have and you need to continue trailblazing.”

What’s remarkable isn’t that these two women went through complex emotional processing after an incident that will likely continue to come up in discussions about their careers. What’s remarkable is how male players like Kyrgios move forward without having to rehash or atone. Kyrgios, who is a force and a formidable talent on the court, will play on, continuing to attract large audiences and, more than likely, headlines about unsportsmanlike incidents on the court. But he probably won’t be thinking about what happened at Wimbledon this week. Unlike Williams, he will have been allowed to move on.

This article originally appeared on Prevention US