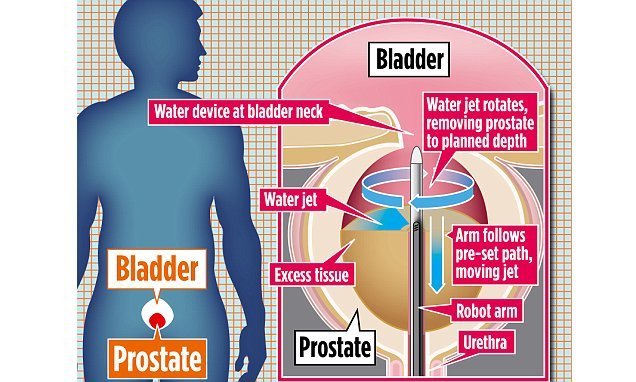 Frequent dashes to the loo at night could be a thing of the past for men suffering prostate problems, thanks to a minimally invasive procedure that shrinks the gland – using high-pressure water jets.

Men suffering non-cancerous prostate enlargement are commonly either given medication to reduce the size of the gland or offered surgery that cuts or burns away tissue.

Complications can include temporary incontinence and erectile dysfunction but experts hope the new option will mean fewer of these difficulties, with one study suggesting the US-developed treatment has a fourfold lower risk of sexual ill health when compared to standard surgery. 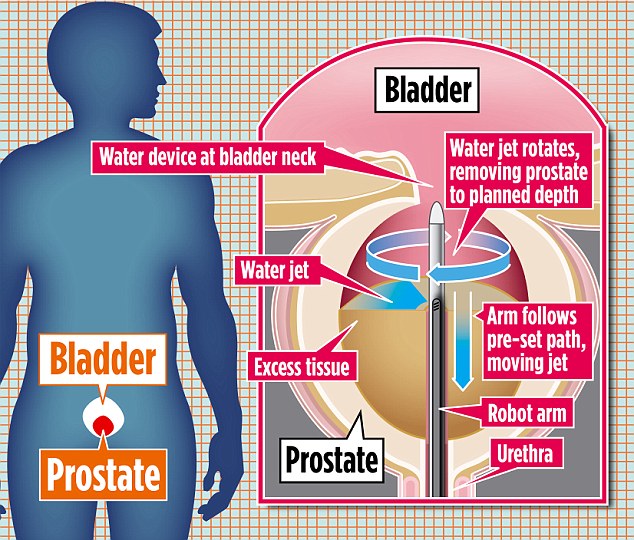 As many as 40 per cent of men over 50 have an enlarged prostate and the condition, known as benign prostatic hyperplasia (BPH) becomes more common with age.

Problems occur when the prostate, a walnut-size gland located in the pelvis between the penis and bladder, becomes enlarged and puts pressure on the urethra, the tube that evacuates urine.

This can lead to increased frequency of urination, especially at night, and difficulty in fully emptying the bladder.

The cause of benign prostate enlargement is believed to be linked to the natural hormonal changes of ageing.

Treatment depends on the severity of symptoms, and starts with lifestyle changes including not drinking late at night.

Drugs called alpha-blockers, which relax bladder neck muscles and muscle fibres in the prostate, making urination easier, may be prescribed, while for more severe cases surgery is an option.

One of the most common is transurethral resection of the prostate, or TURP, involving removing part of the prostate gland, generally using a tube that passes through the urethra.

The new treatment, developed by US-based firm Aquabeam, uses saline water under pressure to carefully blast away excess tissue. The surgeon first uses scans to create a map of the patient’s prostate. The map is used to programme the water device, which is attached to a robotic arm. This delicately rotates and fires water at different pressures, removing the desired amount of the prostate without damaging healthy tissue. 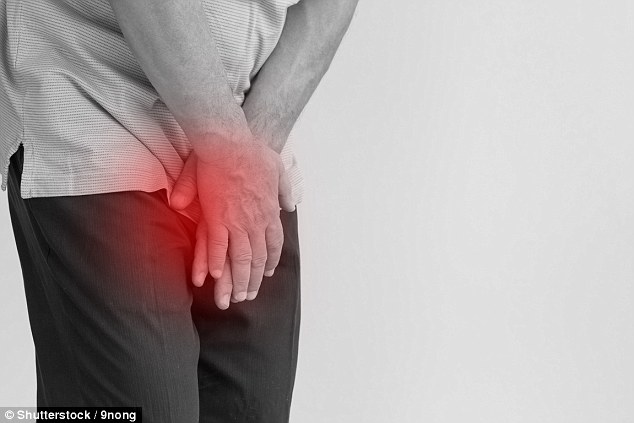 Prostate problems leads to increased frequency of urination, especially at night, and difficulty in fully emptying the bladder

The thin, tube-like water device is inserted into the urethra and through to the bladder neck under general anaesthetic.

The water jet is then switched on and the robotic arm goes though the pre-planned movements to get rid of the excess tissue.

It takes just four minutes on average for the prostate to be reduced in size, while the whole procedure takes little more than 30 minutes. New research shows that it can be highly effective.

In a study reported in the British Journal Of Urology International, a team of specialists from a number of centres, including the Princess of Wales Hospital, Bridgend, looked at the outcomes in 47 men aged 50 to 79.

There was a fourfold improvement in symptom scores.

Neil Barber, consultant urological surgeon at Frimley Park Hospital has carried out the procedure on more than 60 patients, privately and in trials.

He says: ‘The initial results were exciting, suggesting equivalent improvement in urinary symptoms for men with an obstructive prostate compared to standard options such as TURP but with a very low-risk profile for negative effects on sexual function.’

One patient to have benefited is Terry Smith, a 58-year-old former banker from Whitstable, who noticed symptoms about seven years ago.

‘I had a full body scan which showed I had an enlarged prostate, and then over the next year it worsened and eventually I was getting up five to ten times a night,’ he says. ‘My doctor referred me to a local consultant. They recommended TURP, but I didn’t like the side effects so started looking for alternatives.

‘I got in touch with Mr Barber and, after a very productive meeting, decided to go that route.

‘The operation was so easy. My symptoms have all gone for now.

‘They have taken me off the medications I was on and I now empty my bladder in ten seconds rather than two minutes.’