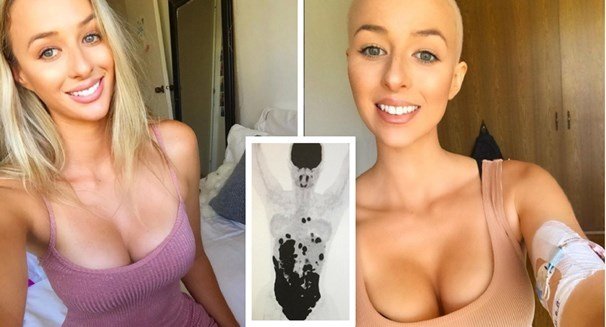 Student nurse Georgia McLennan had been plagued by excruciating pain for months.

One doctor suggested the symptoms – which started early last year – could be down to stomach ulcers, another suspected it was ‘all in her head.’

Despite looking a picture of health, a scan revealed the shocking truth: Georgia’s body was riddled with cancer.

When I didn't live at the hospital ?

“I remember sitting in a waiting room after my scan, when a radiologist asked me when my appointment was for the results,” the 24-year-old, from Queensland, told New Idea.

“My appointment wasn’t for a few days and he said that I wouldn’t be seeing that specialist anymore.”

Georgia assumed that was good news. She was wrong.

“I thought it meant there was nothing wrong with the scan. But then he said ‘you have cancer and it’s everywhere’.”

“I was so shocked, you just never expect it to be cancer – especially not when you’re young.”

What doctors didn’t tell Georgia was that they suspected it was ovarian cancer and they didn’t think she’d survive the weekend.

Luckily for Georgia, a biopsy revealed she had Burkitt’s Lymphoma which responds much better to treatment.

The Gold Coast local began an aggressive course of chemotherapy and had weekly spinal injections.

“Now thanks to my amazing haematologist and all the doctors and nurses from the Gold Coast University Hospital I am in completely free of cancer.”

Now Georgia enjoys regular workouts at the gym – a testament to her incredible recovery.

“I’m doing strength training and cardio. I feel better than I have ever felt!” she smiles.