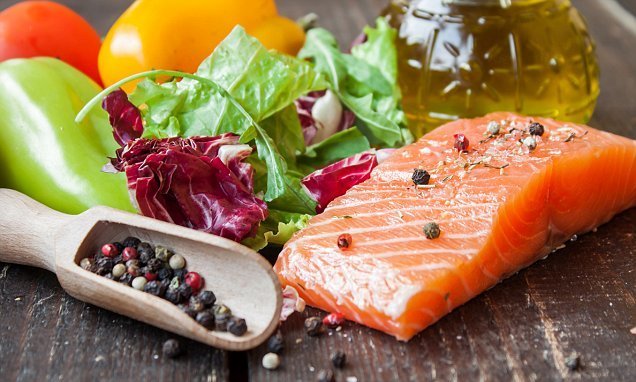 The eating plan that can help battle psoriasis and it’s backed by science: People who consume more olive oil, vegetables and fish are less likely to have severe symptoms

Sticking to a Mediterranean diet could improve the symptoms of psoriasis, a study has found.

Eating the diet rich in fruit, vegetables, olive oil, fish, bread and nuts could slow down the painful condition which causes red, scaly patches of skin.

Foods in the diet are thought to be high in anti-inflammatory properties which could stifle the immune system’s tendency to replace skin too quickly in patients.

In a study of thousands of psoriasis patients, scientists found people whose diet least resembles a Mediterranean one are more likely to have severe symptoms.

One researcher said ‘diet can play an important role in psoriasis’ and the team hope their findings can improve ways of treating the condition. 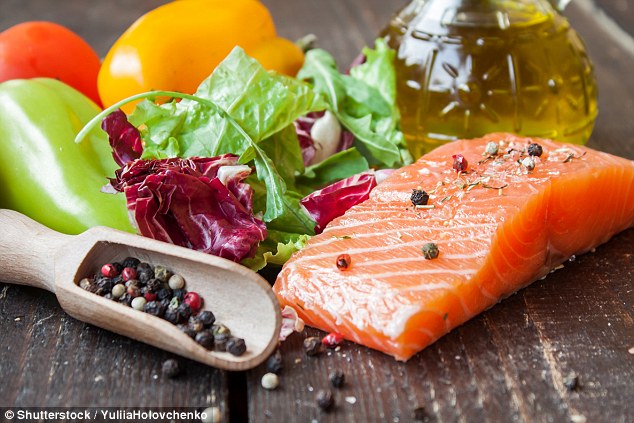 Psoriasis affects around 1.3 million Brits and 6.7 million people in the US, and causes skin to replace itself in just a few days in a process that would normally take weeks – as a result the tell-tale dry, irritated patches of skin cells develop.

Inflammation, the immune system’s way of reacting in order to protect the body, is said to be a contributing factor in how severe patients’ symptoms are.

And the Mediterranean diet contains a lot of foods containing anti-inflammatory chemicals – mainly fruit and vegetables.

Scientists think eating the diet, claimed to have numerous health benefits and best known for containing a lot of olive oil, tomatoes and fish, could improve the quality of life of psoriasis patients.

The Mediterranean diet is widely considered to be one of the healthiest in the world, and is thought to reduce the risk of cancer, heart disease, and bone-weakening osteoporosis.

In the study, by researchers at Mondor Hospital in south-east Paris, 35,735 people took part in a questionnaire, 3,557 of whom had psoriasis.

‘Mediterranean diet may slow the progression of psoriasis’

Dr Céline Phan said: ‘The Mediterranean diet may slow the progression of psoriasis.

Consuming more fruit and fish, and fewer sugary drinks and snacks, are the most important aspects of a Mediterranean diet.

‘If these findings are confirmed, adherence to a Mediterranean diet should be integrated into the routine management of moderate to severe psoriasis.’

It is the inflammatory aspect of the condition which the researchers think the diet could improve.

They say a proinflammatory diet – one high in saturated fat – could make symptoms worse.

Explaining the link, Dr Phan added: ‘Psoriasis is a common chronic inflammatory disease that affects one to two per cent of the general population of all ages.

‘A proinflammatory diet has been associated with an increase in the incidence and severity of several inflammatory disorders, including inflammatory bowel disease (IBD) and rheumatoid disease.

‘Furthermore, recent studies have shown that adherence to a healthy diet such as the Mediterranean diet may reduce the risk of long-term systemic inflammation and thus the risk of metabolic syndrome, cardiovascular events, and other chronic inflammatory diseases.

‘Patients with severe psoriasis displayed low levels of adherence to the Mediterranean diet.’

The study included 35,735 respondents who are part of an ongoing online questionnaire study launched in 2009.

Of these 3,557 reported they had psoriasis with 878 saying it was severe and 299 new cases were reported.

Details of their diets were collected within the first two years diet and scored to reflect how close their eating habits were to a Mediterranean diet.

The study, published in the journal JAMA Dermatology, found people whose diet was more Mediterranean had less severe psoriasis.