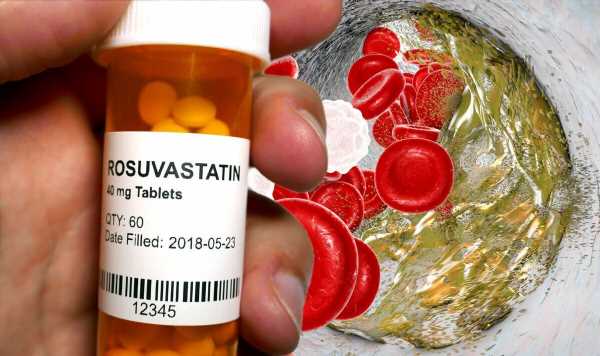 Statins: How the drug prevents heart attacks and strokes

Statins have become the pillar of heart disease prevention, but for some people, adherence remains a struggle. Researchers believe, however, that one way to improve compliance is to adjust the timing of administration. In fact, there is evidence that not all statins need to be taken at the same time of the day. While long-acting statins may work best at night, short-acting statins may be just as effective in the morning.

It has previously been pointed out that the synthesis of cholesterol varies throughout the day, reaching its peak at night.

There is therefore a widely held belief among the scientific community that choosing the time of statins administration is critical.

This is mainly due to the fact that different pills have different half-lives – the time it takes for the body to process the drug.

The authors of a paper published in the Journal of Clinical Lipidology in 2017 remarked: “Dose timing becomes more important in patients with polypharmacy [who take various medications] because it might affect their adherence to statin therapy.

The researchers pointed out the need for larger studies with longer durations to extend and confirm the current evidence of the study.

They explained that their research involved summarising available meta-analyses that compared the morning with the evening dose of statins in terms of safety and efficacy, with a special focus on their low-density lipoprotein-lowering effects.

They noted: “We also explained the difference in efficacy results in case of short-acting compared with the long-acting statins and highlighted how flexibility in choosing the time of statin administration is important for better adherence.”

According to the systemic review, this group of statins was more effective when taken in the evening – a finding that is consistent with other reviews.

It is believed these statins work better at night because the liver enzyme that produces cholesterol is more active at this time.

It is worth mentioning that while the extended-release version of lovastatin is best taken at night, the short-acting lovastatin works best when taken with a meal.

Long-acting statins, on the other hand, include atorvastatin, fluvastatin, and rosuvastatin and have a half-life of up to 19 hours.

The review found that with these statins, the effects were the same whether a person took them in the morning or evening.

These findings led to the suggestion that it was best for patients to take long-acting statins at any time of the day that is easy for them to remember.

The researchers pointed out, however, that it is important for people to be consistent with the timing of their doses, as this allows the drug to work to the best of its ability.

Despite becoming the bedrock of heart disease prevention, statin side effects, such as muscle pain and headaches, have remained a problem.

Though there is evidence that some people are intolerant to the drug, this portion of the population remains very small.

In fact, scientists believe that a staggering 90 percent of the side effects reported are attributable to the nocebo effect – where patients have a negative experience of a drug following a negative expectation.

This recent discovery, researchers hope, will deter many from discontinuing the potentially life-saving drug.