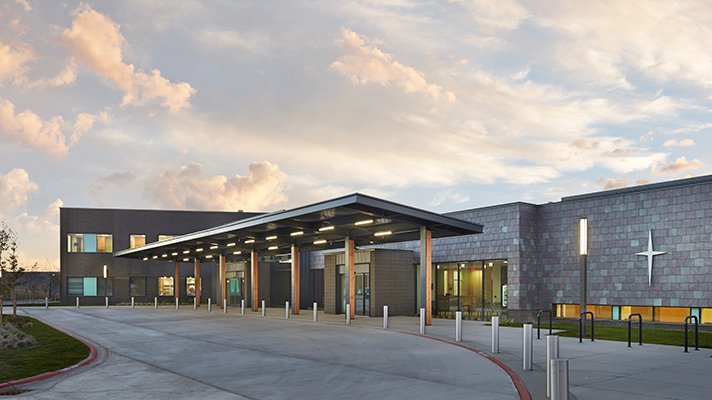 Also, within one year, the hospital reduced narcotic prepack prescriptions coming out of the emergency department by 60 percent and realized hospital cost savings of $200,000.

Additionally, the hospital wanted to appropriately identify and find support for those patients who may be opioid seeking, and help those that needed to be connected to community resources.

So St. Anthony began creating concepts for programs that could help identify at-risk patients and get the information clinicians needed at the point of care to make better decisions.

But as a critical access hospital, St. Anthony has a limited budget for IT.

Steve Hardin, RN, emergency department manager at St. Anthony, took the initiative to design a program on this limited budget that tapped into the care collaboration network from vendor Collective Medical’s EDie platform, a program that involved a significant culture change and process improvement on the backbone of that technology.

“The Collective network is implemented in all hospitals in Oregon, and nearby in Washington and Alaska, and is active in 14 other states across the country,” Hardin explained. “It provides actionable and real-time information on patients that meet certain criteria. Often patients with needs that can’t be met at any single point of care. Patients identified include those with a history of high emergency department utilization, suspected opioid addiction or security alerts from patients who have a history of violence in the hospital setting.”

Hardin and the team set up the emergency department-specific system for care collaboration. It can be used with or without an EHR. Because St. Anthony was operating with limited IT resources – though it does use an EHR – Hardin had EDie set up and connected via fax. He and his team had the alerting criteria configured based on the hospital’s patient population.

Now, whenever a patient presents in the emergency department that meets risk criteria, the EDie system prints out an alert on neon orange paper, alerting staff to important insights available on the patient.

“When the system prints out an alert, emergency department staff review the information and use it to take action,” Hardin said. “For example, if an alert indicates that a patient has had more than six emergency department visits at various hospital locations over three months, as well as a pain contract entered into the system by the patient’s primary care physician, the St. Anthony care team will know to call the PCP and counsel the patient on getting care in the appropriate setting.”

"When the system prints out an alert, emergency department staff review the information and use it to take action."

With regard to the aforementioned reduction in unnecessary emergency department visits from frequent flyers, the technology was key.

“Using the network, Steve and his team initially targeted patients who had visited the emergency department more than 10 times in 12 months and then those with more than five visits in 12 months,” said Joyce Bailey, RN, vice president of patient care at St. Anthony Hospital. “These patients were sent a letter notifying them of their high usage rate.”

These letters were not initially popular and impacted the hospital’s patient satisfaction feedback in the short term, she added. But as patients were supported and better understood the rationale for the new program, feedback normalized over a six-month period.

“At the heart of St. Anthony’s program was re-educating the community on the appropriate usage of the emergency room,” Bailey explained. “The care collaboration network and emergency department platform helped identify those patients who were at risk so St. Anthony providers could communicate with them and create an appropriate care plan.”

The emergency department is not an optimal place to receive primary care, and St. Anthony’s committed to communicating this message to its patients. Upon checkout, each patient receives an information sheet that explains the type of problem treated by the emergency department, urgent care clinics and physicians. Patients also receive a handout on opioid usage.

"At the heart of St. Anthony’s program was re-educating the community on the appropriate usage of the emergency room."

PCPs step in with care plan

Primary care physicians who previously didn’t know about patient emergency department visits now could address the cause as part of the patient’s care plan as St. Anthony updated the PCP information in EDie and the system was auto-sending a letter to them with the flagged concern every time a patient checked into the emergency department.

St. Anthony also began creating categories for patients visiting the emergency department within the system, including: pain patients – referred to a PCP or pain clinic; security risks – after a psychiatric patient broke a nurse’s jaw at a separate facility; false information – particularly important since it’s illegal to falsify information to obtain narcotics; and home health and hospice – so the RN on call can be notified immediately about the emergency department visit.

Within six months, the emergency department could see a difference. Visits by the initial 285 people, who constituted 18 percent of annual visits and received the first batch of letters, were down by 50 percent.

An additional change at St. Anthony as a result of the program was the average wait time in the emergency department. In 2015, at the start of the program, St. Anthony saw Left Without Being Seen rates spike to 6 percent, raising concern since the single highest liability for an emergency department is individuals who leave without having a medical screen performed. However, that rate has since dropped to 2 percent as patients become accustomed to the hospital’s new approach, Bailey said.

And with regard to the aforementioned reduction in narcotic prepack prescriptions coming out of the emergency department, cost savings were among the important results.

“Steve and his team estimate that the hospital has achieved savings of more than $200,000 over 18 months, largely due to the fact that the patients that had been redirected into more appropriate care channels previously were un- or under-insured and covered by charity care,” Bailey explained. “This has been accomplished with limited resources while delivering better patient outcomes.”

“That means they’re not spending their time prescribing narcotics, because they have the data and evidence to educate those patients with a potential opioid addiction and can focus on those most in need of care,” Bailey explained.