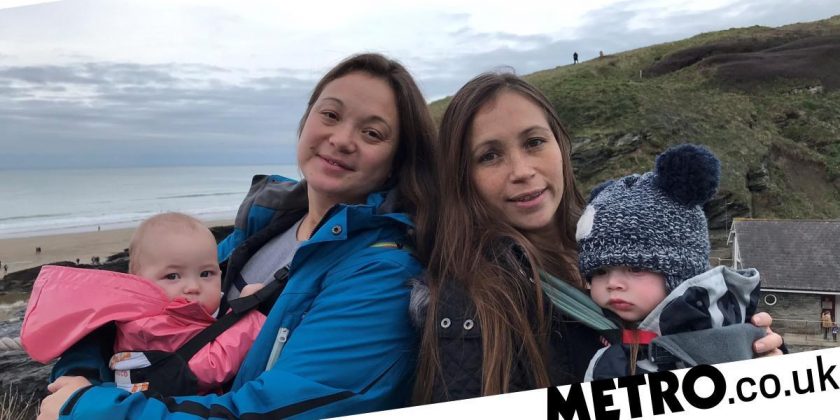 Allie and Jess were sisters who shared almost everything – so when Jess was diagnosed with a type of thyroid cancer, she had to make a very difficult decision.

Jess, now 40, decided to keep her diagnosis from her sister because Allie’s partner Igi was seriously ill with a different type of cancer.

Jess supported her through his quick decline, his death and his funeral before telling her that she had also had treatment.

Luckily, Jess made a quick and full recovery – but just a few years later, Allie, now 32, was diagnosed with the same cancer as her sister.

With Allie anxious for her children who had already lost their father, Jess was by her side offering support and sharing her experience of her own illness.

Now the sisters have matching scars and last year, they celebrated the births of their babies just weeks apart.

Allie told Metro.co.uk: ‘Jess always helped me greatly through everything again and again.

‘After Igi died, being told I had cancer was so scary but Jess had gone through it and she was able to support me’

Initially, Jess was diagnosed completely by chance. She has an autoimmune condition called Grave’s disease that causes an overactive thyroid. It runs in their family but Allie was tested and does not have the condition.

In 2012, Jess’ medication stopped working and she opted to have a thyroidectomy, where the gland is removed, to treat it.

During the operation, doctors found two tumours on the gland and Jess was diagnosed with thyroid cancer.

Jess explains: ‘I had no idea about the cancer before the operation. I was given the all clear at the same appointment that I was told that I’d had the cancer and so it was over before I even knew it started.

‘It was serendipitous that I’d chosen the surgery because if I hadn’t, the other option was the radioiodine. If I’d gone for that, they wouldn’t have discovered the cancer as early.

‘It was a shock just to hear the word cancer, especially when you’re not expecting it. I had gone in just to have a follow up for my surgery, so I wasn’t expecting anything other than him to say it’s all fine.’

Despite the shock, Jess knew she was lucky, especially as her brother-in-law Igi was seriously ill and was diagnosed with rare T-Cell Lymphoma.

Allie explains: ‘Our daughter was born in May, and halfway through June, he just presented some really odd symptoms.

‘He had a very swollen arm so I made him go to the doctors and he sent him to the hospital to have checks.

‘They ran all sorts of tests over the next couple of months. They couldn’t find what was wrong, but they came up with different ideas.

‘He ended up being in hospital for quite a long time, and he wasn’t able to get out of bed, or do any of his self-care anything. Eventually, they found the cancer – it was a rare T-Cell Lymphoma.

‘They started him on chemo the day after they gave him the diagnosis but his body just too weak. He had a respiratory arrest, and he never came out to the induced coma after that.’

Igi died at the age of just 30, just days after his diagnosis.

With everything that happened to Igi, Jess didn’t tell Allie about her condition until after the funeral.

She explains: ‘It wasn’t the right time and it wasn’t until after the funeral that I confessed to her.’

Luckily, Jess didn’t need any further treatment but was regularly monitored to check it hadn’t returned.

Although Allie was devastated by Igi’s death, she tried to carry on with life and watched their children grow, with the help of her family including Jess.

But the sisters were brought even closer when Allie was diagnosed with the same cancer as Jess, three years later.

Despite Jess’ diagnosis, Allie thought the pain in her neck was just a slipped disc.

She explains: ‘I didn’t have symptoms of cancer – I had some nerve problems because I had a herniated disc in my spine. And so they gave me an MRI just to check that out. On that, they saw that I had some growths on my thyroid.

‘Even though Jess had been diagnosed, I never thought it would happen to me too because I don’t have Grave’s disease.’

After Igi’s death from cancer, Allie worried about what would happen to her children if she also ended up seriously ill.

She explains: ‘There was a bit of panic. The first thing I thought of when I thought of cancer was death and I didn’t want to leave my three kids without parents.

‘But the doctor that I could have gone 35 years longer with the same cancer and been in the same sort of state of health. It’s very slow-growing, and they just take it out of you.’

Like her sister, Allie had a thyroidectomy to remove her thyroid and the tumour.

They will both need to take medication for the rest of their lives to help their bodies cope without the gland.

Allie says: ‘It isn’t always straight forward as you’re relying on synthetic hormone medication to control your metabolism. It affects so many things – your energy levels and ability to metabolise food for example. You can eat very little and still put on weight.

‘It can also affect your mental health. We have to take these for the rest of our lives.’

Although they both have check-ups, they are both doing well and last year, they gave birth just weeks apart.

Jess had her third child Daisy on 20 March and Allie had her fourth child Oliver on 6 May last year.

But after losing Igi and both having cancer, the sisters want to raise funds and awareness.

This year, they ran the Race for Life for Cancer Research UK.

Race for Life is a series of events that takes place across the year. Join your local event at raceforlife.org and make a difference in beating cancer.