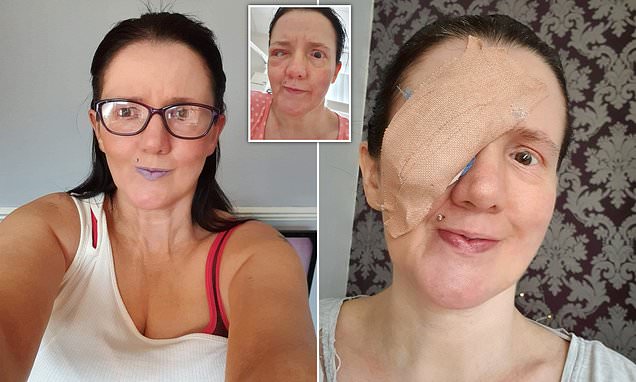 A school cleaner who burst her eyeball with a towel has quit her job because she did not want the ‘zombie-like’ amputation to frighten the children.

Claire Willis, 45, was on holiday in Turkey when she heard a ‘pop’ while drying her face after getting out the shower.

With blurred vision, the mum-of-two from Stoke-on-Trent, Staffordshire, rushed to the mirror fearing her eyeball had actually fallen out the socket.

She then scrambled to hospital where medics revealed she’d perforated her cornea, bandaging the grisly wound and telling her to fly home.

But when British doctors peeled back the bandage, they were shocked to see the pussy yellow infection which had sealed her eye shut – leaving them with no choice but to amputate.

An existing thin cornea coupled with the impact of brushing it with the towel is believed to have caused Ms Willis to rupture her eye. 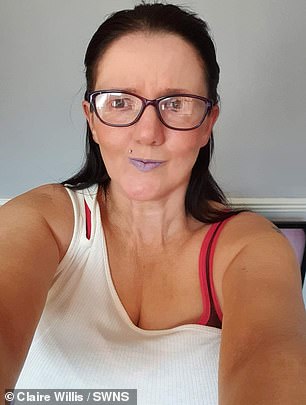 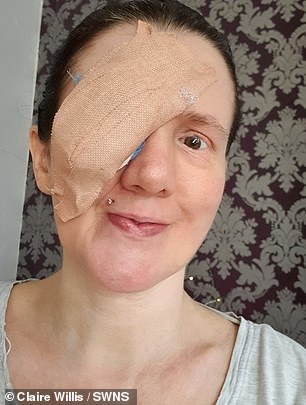 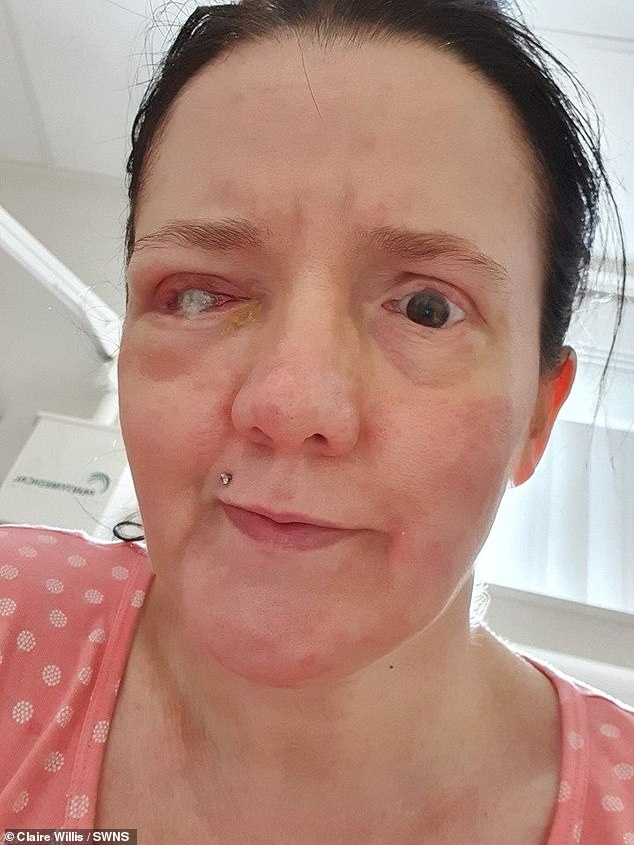 Claire Willis, 45, was on holiday in Turkey when she heard a ‘pop’ while drying her face after getting out the shower. Her eye became infected and closed over (pictured)

Ms Willis said: ‘I looked like an extra from The Walking Dead, and I even left my cleaning job at a school because of how it looked – I didn’t want to scare the kiddies.

‘I was having anxiety issues in public, which really isn’t like me.

‘I had to learn alone how to cope with a half amputated eye – it was sticky on the lids and I was scared to clean it in case I knocked the cosmetic shell out.

‘I never hid my eye though. I didn’t wear sunglasses, I’ve just worn my everyday glasses and I know it’s not forever, it’s only until the prosthetic eye is fitted.

‘I fought my demons, and every day, I pushed myself to go out and slowly but surely, I started feeling more confident.’

When she sustained the wound, the school cleaner was on holiday with her husband Timothy, 52, last July – a place they have visited every year for the past 15 years.

The couple were in their hotel room preparing to head out to meet friends when the wife experienced a sudden pang of pain from her right eye. 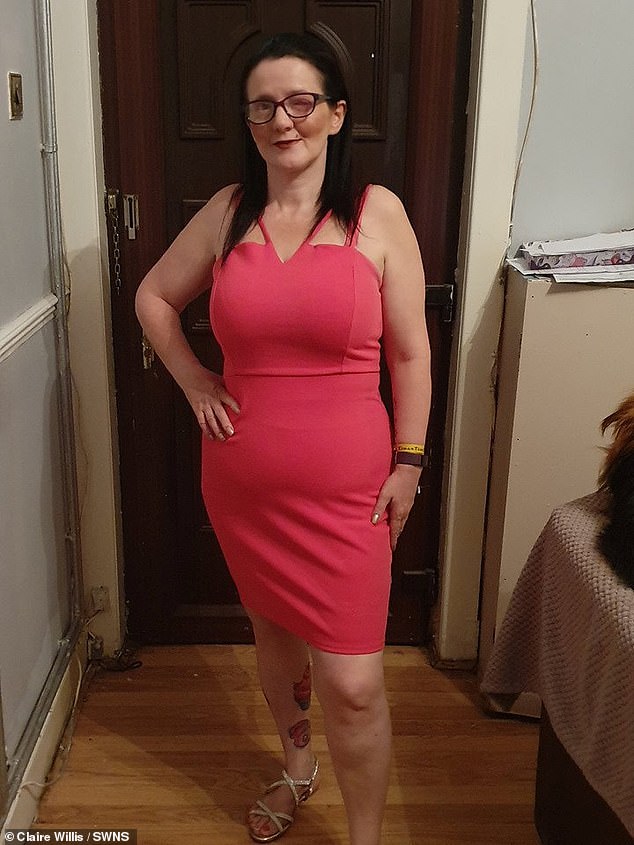 The mother-of -two from Stoke-on-Trent, Staffordshire, has struggled to cope with her injury’s appearance

Bin man Timothy rushed his blinded wife to the local hospital where an examination revealed that Ms Willis had perforated her cornea.

The doctors in Turkey recommended she seek medical assistance in the UK.

Ms Willis said: ‘I was devastated, and I just couldn’t understand how my life had come to this or where to go from here.’

‘We’d only been in Turkey for a few hours when I hurt my eye, and we didn’t get to enjoy any of our holiday before I had my accident.

‘My vision had turned cloudy after I felt the pop, but then everything started going dark, and by the time we got to the Turkish hospital, all I could see was blurry lights.

‘I’ve suffered with dry eyes in the past and just used eye drops, but never experienced anything like this.

‘I was heartbroken when the doctor told me to go back to the UK, but I knew it was for the best. 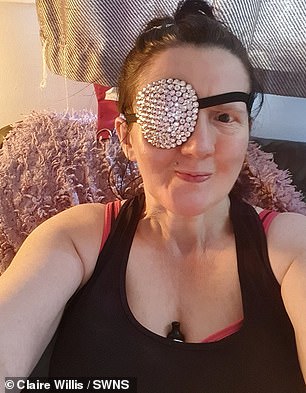 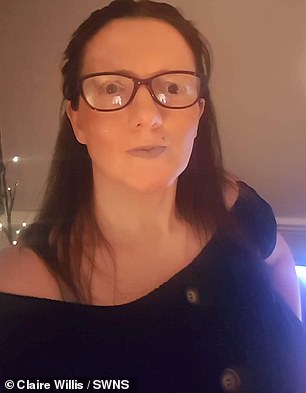 She now sports an eyepatch to cover the wound and is battling on to get her life back on track after the trauma of losing her eye, but the adjustment has been difficult

‘Thomas Cook were amazing, our hotel rep came straight to the hospital and got us on the next flight home.

‘My eye was all bandaged up so I could fly, which was mortifying, but I just wanted to get to the hospital and get it all sorted so I could book a replacement holiday.’

Ms Willis went straight to Royal Stoke University Hospital when she landed where doctors were shocked to see how infected her eye had become during the flight.

Her right eye was fused shut with infection, forcing doctors to clamp her eyelids open to get a look at her eyeball which had turned completely yellow.

Claire Willis, 45, was drying her face with a towel in a Turkish hotel when she heard her eyeball ‘pop’.

Her vision became blurred and her eye turned red.

Suffering searing pain, her husband rushed her to hospital where doctors said she had perforated her cornea, the front part of the eye that covers the pupil.

Doctors told her to fly home to the UK to seek medical treatment, and covered her eye with a bandage.

But upon peeling back the bandage on arrival, British medics were shocked to discover her eye had become infected and had fused shut.

They told her that her sight could not be saved and decided to amputate.

Doctors removed the retina and cornea and fitted a cosmetic shell over the lens.

When her socket has fully healed, Ms Willis will have a prosthetic eye fitted.

Ms Willis spent the next nine days in hospital as doctors tried to fight the infection, but it was no use, and the suggestion of amputation was made.

She said: ‘I felt so isolated in the hospital, and when they suggested amputation, I was totally against the idea.

‘My dad ended up convincing me to have the eyeball amputated, and although I was devastated at the idea, I was in so much pain that I knew it needed to be done.

‘There was no saving my sight, but the surgeon decided to perform a partial removal of my eyeball rather than a full one.

‘He removed the middle of my eye – the retina and cornea – and fitted a cosmetic shell over the lens of my eye.’

Ms Willis’s surgery was a success, and she was allowed to return home just one day after her operation.

She had to keep the bandages on for another week after surgery, and it wasn’t until eight days following the removal that Ms Willis was able to look in the mirror.

The shock of her new appearance was devastating as she struggled to adjust to the idea of living with only one real eye for the rest of her life.

She is now battling on to get her life back on track after the trauma of losing her eye, but the adjustment has been difficult.

She returned to work three weeks after her amputation, but her body was weakened by the tragic events and she was forced to give up one of her jobs.

Desperate to not have their annual holiday taken so suddenly, Ms and Mr Willis rebooked flights to Turkey as soon as she was given the all clear to fly.

Tragedy struck again as Thomas Cook announced their collapse just five days before they were due to fly on 28 September.

What are cornea perforations?

Corneal perforation is the rupturing of the thin protective outer layer which covers the pupil.

The cornea prevents dirt and germs from harming the eye.

A common cause of corneal thinning is rheumatoid arthritis which destroys the stroma – tThe middle and thickest layer made up mostly of water and proteins that give it an elastic but solid form.

It often is very painful and can be identified by several symptoms such as impaired vision and leakage which may be mistaken for tears.

Devastated but determined, the couple are now searching for another holiday and have their fingers crossed for third time lucky.

She said: ‘I’m still at my cleaning job for the council, but I gave up my school cleaning job – I was struggling mentally and physically, and I just couldn’t cope with two jobs any more.

‘My eye isn’t ready yet to have a prosthetic fitted, so I just have to wait and stay looking like this until my socket has recovered enough, but I don’t know when that will be.

‘Timothy has been so supportive throughout it all, and our two children, Ben, 22, and Daniel, 20, still live at home so they’ve been helping me lots around the house.

‘All we wanted was to go back on holiday and still try to have some fun this year, and our bags were all packed ready to go when Thomas Cook collapsed a few days before we were due to fly.

‘It was just yet another thing to go wrong, but I’m trying to stay positive and we’re looking for another holiday deal before the year is over.’

An ophthalmologist from Royal Stoke University Hospital said: ‘This lady had particular circumstances that led to a thinner than normal cornea in her case.’