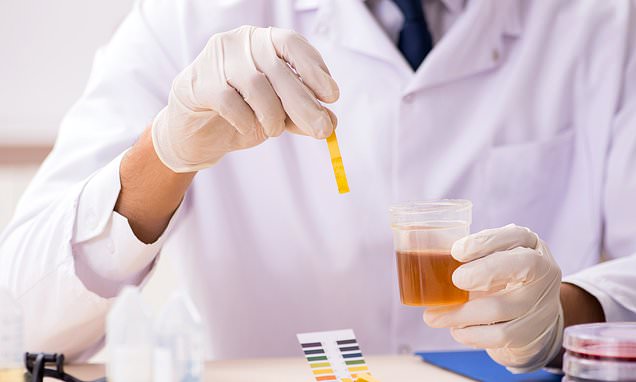 The ‘PUR’ test, pioneered by University of East Anglia and the Norfolk and Norwich University Hospital, detects chemicals in the urine secreted by cancer.

Being able to do a home test kit is a step forward because it could spell the end of uncomfortable rectal exams.

The urine test is also more accurate at home than the clinic because the first urination in the morning provides more clues than the rest of the day.

Men are on a ‘watch and wait’ list wouldn’t require so many follow-up appointments if they could post a home-test kit, either.

PUR can predict whether patients will require treatment up to five years sooner than standard clinical methods, the scientists say, and assess how aggressive the disease is. 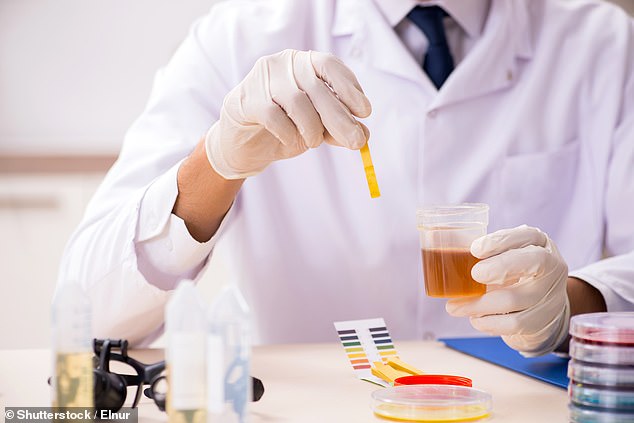 A home urine test could ‘revolutionise’ prostate cancer diagnosis for thousands of men. The ‘PUR’ test, pioneered by University of East Anglia and the Norfolk and Norwich University Hospital, detects chemicals in the urine secreted by cancer

Lead researcher Dr Jeremy Clark, from UEA’s Norwich Medical School, said: ‘Being able to simply provide a urine sample at home and post a sample off for analysis could really revolutionise diagnosis.

‘It means that men would not have to undergo a digital rectal examination, so it would be much less stressful and should result in a lot more patients being tested.

‘The PUR test looks at gene expression in urine samples and provides vital information about whether a cancer is aggressive or ‘low risk’.’

As part of a small study, the researchers gave 14 men at-home collection kits.

They then compared the results of their morning-time home urine samples with samples collected after a digital rectal examination.

WHAT ARE THE CURRENT METHODS FOR SPOTTING PROSTATE CANCER?

There’s no single, definitive test for prostate cancer. A GP will discuss the pros and cons of the various tests with a man with symptoms to try to avoid unnecessary anxiety.

The doctor is likely to:

The GP will assess the risk of having prostate cancer based on a number of factors, including the patient’s PSA levels and the results of their prostate examination, as well as their age, family history and ethnic group.

If the man is deemed at risk, they will be referred to hospital to discuss the options of further tests, which include an MRI and biopsy.

Dr Clark said: ‘We found that the urine samples taken at home showed the biomarkers for prostate cancer much more clearly than after a rectal examination.

‘Because the prostate is constantly secreting, the collection of urine from men’s first urination of the day means that the biomarker levels from the prostate are much higher and more consistent, so this is a great improvement.

‘And feedback from the participants showed the at home test was preferable.’

The most commonly used tests for prostate cancer include blood tests, a physical examination known as a digital rectal examination (DRE), an MRI scan or a biopsy.

Prostate cancer usually develops slowly and the majority of cancers will not require treatment in a man’s lifetime.

Active surveillance, or ‘watchful waiting’ is a way of monitoring prostate cancer that isn’t causing any symptoms or problems over the long term.

If these men could take an at-home test, they would only be called in if the results were concerning, instead of annually for painful and expensive biopsies.

‘It means that a negative test could enable men to only be retested every two to three years, relieving stress to the patient and reducing hospital workload.’

Robert Mills, Consultant Surgeon in Urology at the Norfolk and Norwich University Hospital, said PUR is ‘a very exciting development’.

‘When we do diagnose prostate cancer, the urine test has the potential to differentiate those who need to have treatment from those who do not need treatment, which would be invaluable,’ he said.

‘These patients go on to an active surveillance programme following the diagnosis which may involve repeat biopsies and MRI scans which is quite intrusive.

‘This urine test has the potential to tell us whether we needed to intervene with these patients.’

Independent academics were wary the latest findings, published in BioTechniques, were ‘overstated’.

Dr Mangesh Thorat, deputy director of the Cancer Prevention Trials Unit at King’s College London, said: ‘They found that “at-home” samples are at least as good as samples in the clinic.

‘However, these urine-based biomarkers, although promising and an area of active research, are not yet recommended for prostate cancer screening or during management of prostate cancer by active surveillance.

‘Therefore, these findings do not currently have any clinical or public health implications. Should any of these biomarkers become a standard screening or surveillance tool in future, this new “at-home” method will be useful.”

Prof Justin Stebbing, Professor of Cancer Medicine and Medical Oncology, Imperial College, said: ‘A test that can replace a hospital or doctor-based examination is important, but this study is too small right now to draw any conclusions.’

There is no national prostate screening programme as for years the tests have been too inaccurate.

Men over 50 are eligible for a ‘PSA’ blood test which gives doctors a rough idea of whether a patient is at risk. But it is unreliable.

Simon Grieveson, head of research funding at Prostate Cancer UK, said: ‘We urgently need better tests both to detect prostate cancer early, and to help inform whether men are likely to need urgent treatment or if they can safely remain under active surveillance.

‘This new test is early in its development, but has the potential to offer a simple, non-invasive way of predicting aggressive prostate cancer without the need for men to attend a clinic.

‘Prostate Cancer UK and Movember are happy to announce that we have awarded funding to the team at the University of East Anglia to test this in a much larger group of men.’

Prostate cancer is the most common cancer in men in the UK, affecting around 47,000 men each year.

Scientists are unsure as to what causes prostate cancer, but age, obesity and a lack of exercise are known risks.

WHAT IS PROSTATE CANCER?

How many people does it kill?

It means prostate cancer is behind only lung and bowel in terms of how many people it kills in Britain. In the US, the disease kills 26,000 each year.

Despite this, it receives less than half the research funding of breast cancer – while treatments for the disease are trailing at least a decade behind.

How quickly does it develop?

Prostate cancer usually develops slowly, so there may be no signs someone has it for many years, according to the NHS.

If the cancer is at an early stage and not causing symptoms, a policy of ‘watchful waiting’ or ‘active surveillance’ may be adopted.

Some patients can be cured if the disease is treated in the early stages.

But if it diagnosed at a later stage, when it has spread, then it becomes terminal and treatment revolves around relieving symptoms.

Thousands of men are put off seeking a diagnosis because of the known side effects from treatment, including erectile dysfunction.

Tests for prostate cancer are haphazard, with accurate tools only just beginning to emerge.

There is no national prostate screening programme as for years the tests have been too inaccurate.

Doctors struggle to distinguish between aggressive and less serious tumours, making it hard to decide on treatment.

Men over 50 are eligible for a ‘PSA’ blood test which gives doctors a rough idea of whether a patient is at risk.

But it is unreliable. Patients who get a positive result are usually given a biopsy which is also not foolproof.

Scientists are unsure as to what causes prostate cancer, but age, obesity and a lack of exercise are known risks.

Anyone with any concerns can speak to Prostate Cancer UK’s specialist nurses on 0800 074 8383 or visit prostatecanceruk.org