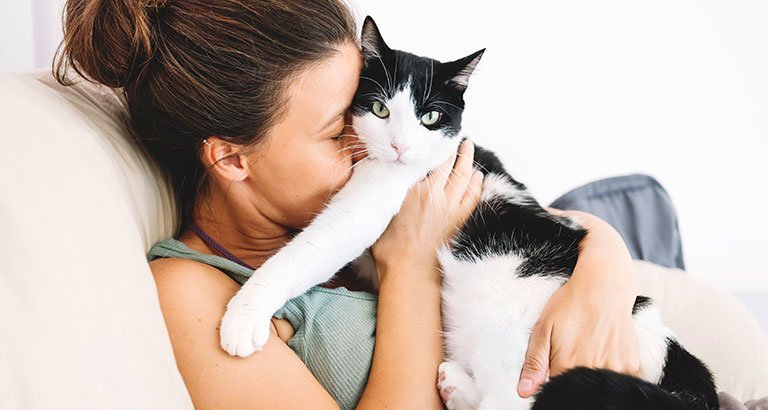 MOOD
Just half an hour with a pooch can trigger your noggin to release brain chemicals linked to happiness. (Bonus: The pup gets the same feel-good lift!)
Pet therapy with cats can also help ease the blues. Kitty owners can be less lonely and have higher morale than those who don’t have a cat—likely because cuddling with an animal can unleash oxytocin, the body’s “love” hormone.

STRESS
Being with a dog for five minutes can lower your levels of cortisol, a stress hormone. The effect is so pronounced that, in one study, frazzled people said they felt it was more relaxing to be around their pets than their spouses.

It even works at the office: Research found that people who brought their dogs to work had lower stress levels throughout the day (meanwhile, levels rose among their canine-less colleagues).

Norman get your shit together

Research suggests that spending time with animal pals may help ease your pain.

FITNESS LEVEL
Active mutts need, well, activity. So it’s no surprise that dog owners are more likely to be in shape. They’re also more likely to get the vigorous workouts the body needs.

There’s more: Walking with a dog—versus cruising alone—has been linked to more social interactions, such as conversations with strangers (like, say, that cute guy at the park).

HEART
Petting an animal—or watching fish swim around in a tank—can lower your heart rate and blood pressure.

Pet aficionados may also have lower levels of heart-hurting cholesterol and fatty triglycerides.

The really great news? If you live with a Fifi or Fido, you may need fewer overall visits to the doctor and have a healthier ticker. One study found cat owners were less likely to die from heart disease than those who live sans felines. Another found that dog owners were nine times more likely to be alive one year after a heart attack than those without dogs.