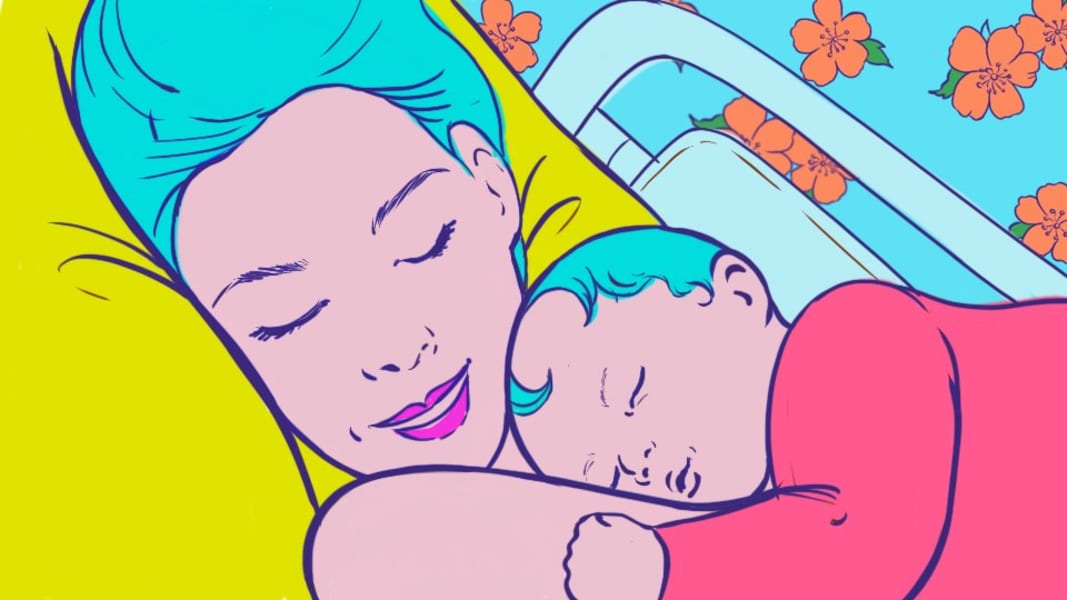 When I became pregnant, I read nearly 100 books about becoming a parent, a good fifth of them specifically about pregnancy and delivery. I even read books that didn’t entirely apply to me, like The Birth Partner: Everything You Need to Know to Help a Woman in Childbirth. (I was a single parent without a partner in the picture.) To me, knowledge was power, and I wanted to be as prepared as possible before my daughter arrived

And while I may have seemed incredibly prepared, there was one thing I didn’t do. In all of my reading and mental prep — even during my prenatal yoga class, when the instructor asked us to hold a chair position against the wall, thighs shaking, for a full minute to simulate the full discomfort of labor — I never actually imagined giving birth. I could see myself as pregnant, and I could see myself with a child. There was no in between. There was, however, a lot of Google image searching of the term “mucus plug.”

Here’s the thing: While I wanted to know everything about birth in an abstract way, I was too terrified to relate it to my upcoming experience. I couldn’t make plans. Some people, including my prenatal yoga instructor, suggested I hire a doula, just to have someone in the room with me. I decided not to. Part of it was because I felt like I didn’t need anyone’s help, but a bigger part of it was that I was so afraid that letting anyone in would be the ultimate act of vulnerability. I spent my entire pregnancy trying to seem like I had it together — I prided myself on never even asking my OB a question, instead relying solely on internet research — and admitting my panic, the way the concept of birth kept me awake at night, would be like admitting defeat.

As my due date, May 1, approached, I threw myself into work. I planned to work up until that day, a Friday, even scheduling a lunch and meetings. What was beyond May 1 was a scary black hole.

But my daughter had other plans. My water broke Tuesday night when I woke up, groggy and disoriented, to use the bathroom. As I peed, water seemed to flow into the toilet forever. I had weighed myself before I had gone to bed, and when I weighed myself after I stood up, I was five pounds lighter. I knew my water had broken.

It was 2 a.m. and I called the on-call line for my OB’s office. Since contractions hadn’t started yet, they said I could either go to the hospital right away or wait until contractions began. Once your water breaks, they explained, the clock is ticking, and your baby should be delivered within 24 hours to avoid infection or complications.

So that was it. I was giving birth that day. I was also still in denial. I had assignments I needed to finish. I turned on the lights, opened my laptop and got pulled into a Facebook Messenger conversation with an old friend who had an issue with a woman he was dating. Contractions began, and I started timing them on my phone. Finally, at about 6 a.m., I changed into a T-shirt and jeans, pulled my hospital bag out of my closet and walked a half-mile to the subway. It was a warm spring morning after months of cold, the cherry blossoms were in bloom, and as I left my apartment building, I felt a tiny sliver of excitement. My life would never be the same.

Contractions were every five minutes but still light. I got a seat on the subway easily, and when I got off, I stopped to buy a bagel and coffee around the corner from the hospital. When I walked onto the labor and delivery floor, as instructed by the on-call line, I said, “Hi, I think I’m in labor?”

I remember exactly what I said, including the inflection, because I practiced the line in my head over and over again on the subway. I wanted to sound calm and comfortable, and I did not want anyone to know how terrified I truly was.

By the time they brought me into a triage room, contractions had really begun. I tried to navigate the pain, thinking about surfing, something I love but am not really good at. Nevertheless, catching a wave was similar to “catching” a contraction — learning to anticipate it, move with it, become one with it.

As I was hoping the contractions meant something would happen soon, an OB came to check on me and found I wasn’t dilated at all.

Hours later, there was no change, not even with Pitocin, a drug used to induce labor. I was told I could either wait a few hours to see if I did dilate or be prepped for a C-section.

I panicked. A C-section had never been in my plans. I still was by myself, and suddenly, I felt really alone. I looked through my phone and ended up texting a friend — the same friend who shrugged when I told her I was planning to go through labor by myself — and she said she’d be happy to come be there with me.

As she headed toward the hospital, I panicked more. How could I take care of a newborn after surgery? I’d already gone through hours of contractions — how couldn’t they have done anything?

My friend came. They prepped me for the C-section, the first surgery I ever had. An hour later, I met my daughter, Lucy Gail.

In the U.S., according to the Centers for Disease Control, nearly 32 percent of births end in C-section, and, from listening to friends’ anecdotes, I know it’s many pregnant people’s worst fear. I know it was mine. But less than 24 hours after my C-section, I was walking unassisted. In another two days, I was home with Lucy — by ourselves — and I was able to effectively take care of her. In less than a week, we were going on walks around our neighborhood. Three years later, the C-section scar is a thin, faint line that has even disappeared in some places.

Everyone’s birth story, and recovery story, is different. But what I wish I knew, and what made my experience so much more stressful than it had to be, was my refusal to confront the fact that this was going to happen. I put off plans to have a doula because I didn’t want to deal with the reality: I was going to have a baby. And being alone in the hospital for hours experiencing contractions, even though they weren’t “bad,” could have been so much better if I’d just admitted the fact that I was scared as all hell.

Childbirth, whether C-section or vaginal, doesn’t need to be frightening. One of my best friends has now had two unmedicated births in birthing tubs, catching her youngest son and gently ushering him out of the birth canal herself — the pictures are incredible. When, and if, I have a second child, I don’t know if I’ll try to have a vaginal delivery or opt for a cesarean section, since that’s what I’m familiar with. But I do know I’ll be more honest with myself and my emotional needs. There’s nothing wrong with being scared, and there’s nothing wrong with being courageous enough to admit your fear.