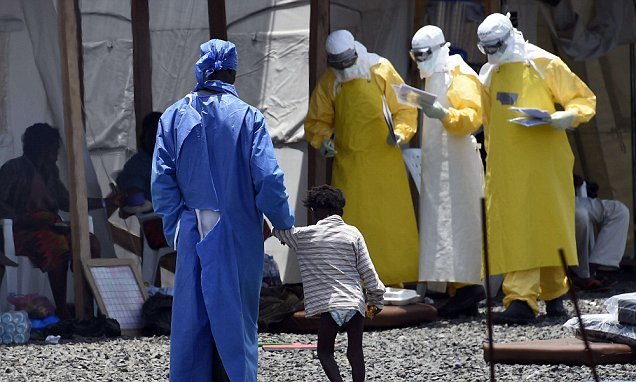 Ebola returns to Congo: Four new cases declared just 9 days after the end of an outbreak which killed 33 people in the African country

Another Ebola outbreak has been declared in the Democratic Republic of Congo less than 10 days since the last one ended after killing 33 people.

At least four people have tested positive for the deadly fever which causes people to haemorrhage blood and their organs to fail.

The latest cases have been found in and near a town called Mangina, about 62 miles (100km) from the border with Uganda in the country’s north-east.

Experts from Congo’s health ministry will arrive in the nearby city of Beni today, and the World Health Organisation has begun moving supplies to the area.

Some 20 people are reported to have died of haemorrhagic fever in the area already, the ministry said, but it did not say when that happened and it is not clear whether the deaths were linked to the new outbreak.

There are concerns if the outbreak spreads it will be near an active war zone in the region of North Kivu and in a place with close links to Rwanda and Uganda, increasing the risk of Ebola spreading across the border.

The outbreak is some 1,553 miles (2,500km) from where 33 people died of the haemorrhagic fever in the northwest of the country and is not thought to be linked. 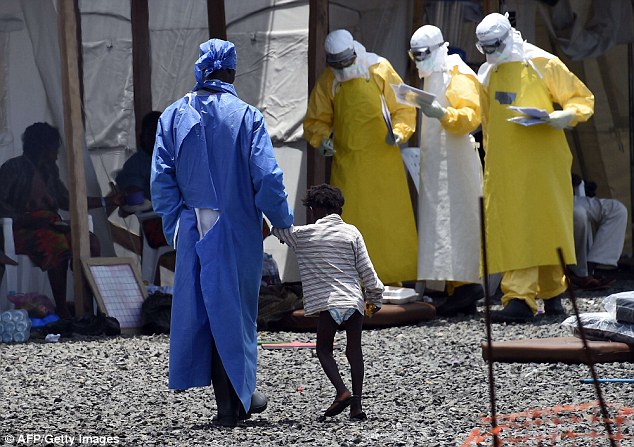 New cases of the highly infectious and often fatal disease Ebola have been declared in the north-east of Congo  (pictured: health workers with a girl suffering from Ebola in Liberia in 2014)

This new outbreak of Ebola will be the 10th in Congo’s history, more than twice as many as any other country.

The viral disease was discovered near the Ebola River in the north of the country in 1976, and is thought to be spread by bats and caught by humans from bush meat – meat from wild animals – which is sold at markets to be eaten.

It then spreads between people via contact with the bodily fluids of infected people.

Ebola causes a fever, vomiting, diarrhoea and bleeding, and is often fatal because there is no cure.

Congolese and international health officials were praised for a quick response to the last outbreak.

They used an experimental vaccine being developed against the virus, but it is specific to one strain and the strain in the new outbreak has not been confirmed.

‘We will fight this one as we did the last’

The director general of the World Health Organisation, Tedros Adhanom Ghebreyesus said: ‘Ebola is a constant threat in DRC. What adds to our confidence in the country’s ability to respond is the transparency they have displayed once again.

‘We will fight this one as we did the last.’

The country’s health minister Oly Ilunga Kalenga said: ‘Although we did not expect to face a 10th epidemic so early, the detection of the virus is an indicator of the proper functioning of the surveillance system.’

Travel into and out of Mangina has been blocked to try to contain the virus, and governor of the North Kivu region, Julien Paluku, called on residents to remain calm.

Congo’s east is volatile, with dozens of rebel groups staging attacks and vying for mineral-rich land.

The ministry said it has put in place security to protect the deployed health care workers and the population.

Ebola in Congo ‘reminiscent’ of 2014 disaster

This year’s Ebola outbreaks follow a devastating spread of the disease between 2013 and 2016 which killed 11,300 people in the West African countries of Sierra Leone, Liberia and Guinea.

There were fears the outbreak, in Mbandaka and Bikoro, would spread to the port city of Kinshasa.

At the time Dr Derek Gatherer, a virologist from Lancaster University, warned the outbreak was ‘reminiscent’ of the 2014 Ebola pandemic.

In an editorial for a scientific journal, Dr Gatherer wrote: ‘The current outbreak has the potential for rapid expansion in numbers.

He added: ‘Mbandaka is a port on the River Congo, the main arterial transport link from DRC’s capital Kinshasa to inland cities.

‘With poor to non-existent provision of running water, sewage and electricity, the similarities with the urban situation… during the west African outbreak are obvious.’

‘The risk of transmission to Kinshasa – central Africa’s main megacity – either by river or by air from Mbandaka’s regional airport, is a major concern.’

The 2014 international response to the Ebola pandemic drew criticism for moving too slowly and prompted an apology from the WHO.

Hundreds of locals and frontline health workers in Bikoro, Iboko and Mbandaka were given the experimental vaccine, known as rVSV-ZEBOV.

There are no proven Ebola vaccines, however, the rVSV-ZEBOV has been shown to be effective in trials in Guinea during the pandemic.

WHAT IS EBOLA AND HOW DEADLY IS IT?

Ebola, a haemorrhagic fever, killed at least 11,000 across the world after it decimated West Africa and spread rapidly over the space of two years.

That pandemic was officially declared over back in January 2016, when Liberia was announced to be Ebola-free by the WHO.

The country, rocked by back-to-back civil wars that ended in 2003, was hit the hardest by the fever, with 40 per cent of the deaths having occurred there.

Sierra Leone reported the highest number of Ebola cases, with nearly of all those infected having been residents of the nation.

WHERE DID IT BEGIN?

An analysis, published in the New England Journal of Medicine, found the outbreak began in Guinea – which neighbours Liberia and Sierra Leone.

A team of international researchers were able to trace the pandemic back to a two-year-old boy in Meliandou – about 400 miles (650km) from the capital, Conakry.

Emile Ouamouno, known more commonly as Patient Zero, may have contracted the deadly virus by playing with bats in a hollow tree, a study suggested.

HOW MANY PEOPLE WERE STRUCK DOWN?

Figures show nearly 29,000 people were infected from Ebola – meaning the virus killed around 40 per cent of those it struck.

Cases and deaths were also reported in Nigeria, Mali and the US – but on a much smaller scale, with 15 fatalities between the three nations.

Health officials in Guinea reported a mysterious bug in the south-eastern regions of the country before the WHO confirmed it was Ebola.

Ebola was first identified by scientists in 1976, but the most recent outbreak dwarfed all other ones recorded in history, figures show.

HOW DID HUMANS CONTRACT THE VIRUS?

Scientists believe Ebola is most often passed to humans by fruit bats, but antelope, porcupines, gorillas and chimpanzees could also be to blame.

It can be transmitted between humans through blood, secretions and other bodily fluids of people – and surfaces – that have been infected.

IS THERE A TREATMENT?

The WHO warns that there is ‘no proven treatment’ for Ebola – but dozens of drugs and jabs are being tested in case of a similarly devastating outbreak.

Hope exists though, after an experimental vaccine, called rVSV-ZEBOV, protected nearly 6,000 people. The results were published in The Lancet journal.