Could COWS be the cause of the next epidemic? Bacteria jump from the animal to humans

Could COWS be the cause of the next epidemic? Antibiotic-resistant superbugs including MRSA jump from bovines to humans

Cows may be the cause of the next health epidemic.

The bovine animal is a reservoir for antibiotic-resistant superbugs, such as the notoriously difficult-to-treat MRSA, which are a serious threat to human health, a ground-breaking Finnish study found.

MRSA is resistant to the antibiotic methicillin and can cause life-threatening sepsis, pneumonia or toxic shock syndrome.

This is the first time antibiotic resistance has been linked to cows, with pigs previously being blamed for driving the crisis. This raised fears humans may catch superbugs if they eat infected pork.

Experts have previously warned antibiotic resistance poses ‘as big a risk as terrorism’. According to the World Health Organization (WHO) the resistance crisis ‘has the potential to affect anyone, of any age, in any country.’ 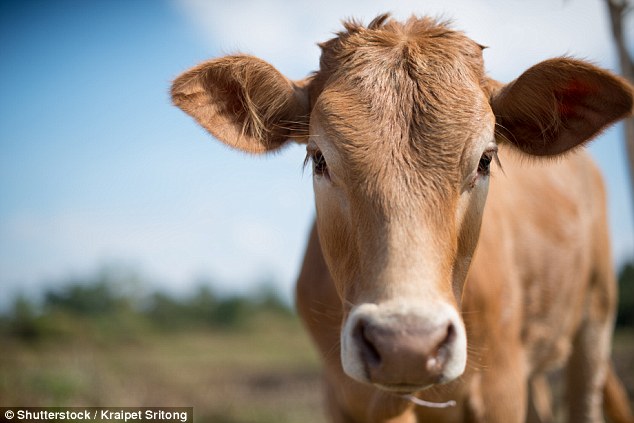 Researchers from the University of Helsinki analysed the evolution of staphylococcus bacteria, such as MRSA, over several millennia.

The genes of the bacteria were assessed in humans and animals to determine the DNA changes that allowed the pathogen to infect new creatures over thousands of years.

As well as allowing the bacteria to infect new species, these DNA changes may have also caused the pathogen to develop antibiotic resistance.

Combining an antibiotic with the compound that gives vanilla its rich taste may stop the spread of drug-resistant superbugs, research suggested in July 2018.

Mixing the drug spectinomycin with vanillin increases the antibiotic’s ability to enter bacterial cells and prevent their growth, a German study found.

Spectinomycin was initially used in the 1960s to treat gonorrhoea until the STI developed resistance to it.

Experts have previously warned antibiotic resistance poses ‘as big a risk as terrorism’.

A lack of new drugs combined with overprescribing is thought to have driven the resistance crisis, which, according to the World Health Organization, ‘has the potential to affect anyone, of any age, in any country.’

A selection of these combinations were then tested in multi-drug resistant bacteria taken from infected hospital patients.

Based on this genetic analysis, humans appear to have been the original hosts for staphylococcus, which was not antibiotic resistant at the time.

This bacteria then spread to farm animals when they were domesticated to become livestock around 10,500 years ago.

While in cows, staphylococcus developed antibiotic resistance, with this resistant bacteria then re-infecting humans.

The problem may have arisen through the massive use of antibiotics among animals on factory farms.

Study author Jukka Corander said: ‘Our observations give emphasis to the importance of detailed epidemiological monitoring, so that strains with the potential to cause epidemics can be discovered as early as possible.’

The findings were published in the journal Nature Ecology & Evolution.

Speaking of the resistance crisis, Professor Sean Brady, from The Rockefeller University, New York, previously said: ‘Despite the wide availability of antibiotics, infectious diseases remain a leading cause of death worldwide.

‘In the absence of new therapies, mortality rates due to untreatable infections are predicted to rise more than tenfold by 2050.’

The WHO has also classified antimicrobial resistance as a ‘serious threat’ to every region of the world.

Penicillin, the first and most famous antibiotic, was discovered by the Scottish microbiologist Alexander Fleming in 1928.

Yet, less than a century after Fleming’s discovery, there are precious few antibiotics left and many superbugs are already resistant to all of them.

Figures suggest up to 50,000 people die each year due to antibiotic-resistant infections in Europe and the US alone.

Globally, at least 700,000 people pass away annually due to antibiotic-resistance complications from illnesses such as malaria, AIDS and tuberculosis.

An Englishman who caught the ‘world’s worst’ case of super-gonorrhoea was cured in April 2018 with a last-ditch antibiotic.

In the first recorded case worldwide, the unidentified man caught a version of the sexually transmitted infection (STI) that was resistant to two crucial drugs.

Health officials revealed he caught it from a one-night stand with a woman during his travels to south east Asia earlier this year – despite having a girlfriend in the UK.

Public Health England (PHE) issued a warning over the the STI, which is resistant to ceftriaxone and azithromycin – the two drugs recommended for gonorrhoea.

In a statement, the Government agency revealed the man – whose location has also been withheld – was cured with the antibiotics ertapenem.

Dr Gwenda Hughes, head of STIs at PHE, said: ‘We are pleased to report the case of multi-drug resistant gonorrhoea has been successfully treated.

‘Investigations have also revealed there has been no further spread of this infection within the UK.’

Dr Hughes did warn that ‘we expect to see further cases of multi-drug resistant gonorrhoea in the future’.

World Health Organization (WHO) experts raised fears two years ago the STI, once known as the ‘clap’, could become immune to antibiotics in a ‘matter of years’.

The WHO recommends patients are given ceftriaxone and azithromycin to combat gonorrhoea, the third most common STI in Britain.

Officials said: ‘This is the first global report of high-level azithromycin resistant N. gonorrhoeae which is also resistant to ceftriaxone.’