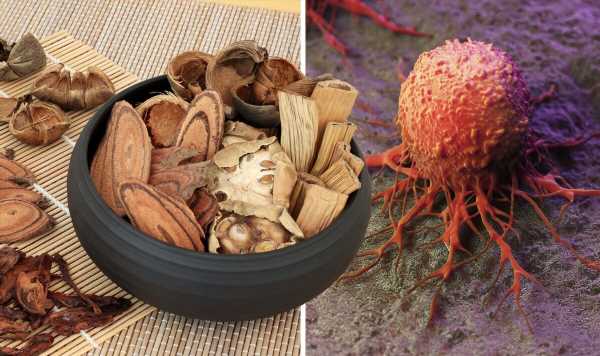 Herbal supplements are widely used for their cancer-fighting properties. In rare instances, however, the remedies have been found to initiate the disease. One such herb is Aristolochia, found in birthwort pills. According to the University of Oxford, the ingredient has found “multifarious uses in traditional medicinal systems.”

According to the health platform RXlist, birthwort can prevent seizures, increase sexual desire, boost the immune system and start menstruation.

The supplement, however, is deemed unsafe on the grounds that it can be toxic to the liver and is known to cause cancer.

But despite serious safety concerns, it can still be found in traditional medicines, which are not subjected to rigorous checks before entering the market.

READ MORE: Pancreatic cancer: The ‘discolouration’ in two areas could be a symptom – ‘insidious’

Warnings of the ingredient first emerged in the 1990s in a report published in the Lancet, after several patients developed severe kidney failure.

Science.org said the findings of two subsequent studies suggested the ingredient “may be as cancerous as smoking”.

In 2010, a paper that appeared in the journal of Science Translational Medicine pointed out that the supplements were widely available from traditional Chinese practitioners.

A team of researchers, led by the cancer researcher at the National Cancer Centre Singapore and the National University of Singapore, looked at the tissues of nine patients with upper urinary tract cancer who had reported taking birthwort.

Because upper urinary tract cancer usually presents in the kidneys, the researchers examined cancerous kidney tissue and compared it with nearby non-tumourous tissue.

They discovered up to 1500 genes with mutations inside the malignant tissue, a level higher than has been found for either lung or skin cancer patients.

Using the same sequencing method, their findings suggested birthwort may also be responsible for cancer of the liver, for example.

The results chimed with those of a later study, conducted by a group of scientists in the US and Taiwan.

Medicinenet explains: “Health authorities around the world have taken action to protect the public against Aristolochia and aristolochic acid.

In the United States, the Food and Drug Administration seizes products it believes may contain toxic ingredients.

But because the ingredient is typically sold as a nutritional supplement, as opposed to medicine, it is therefore exempt from rigorous checks by health authorities.