Babies kept away from their mothers after they are born may do worse in life up to 20 years later.

Newborn infants cared for in incubators struggle with sleep and emotions as they grow up and become more easily stressed as adults, a study has found.

But babies given skin to skin contact with their mothers do not have the same issues – even if this happens for just an hour a day.

New research highlights the importance of ‘kangaroo care’ – in which babies are taken out of an incubator and placed naked on their mother’s chest under her clothes like being in a kangaroo pouch.

Not all hospitals in the UK offer this, but many provide it for underweight or premature babies from around 28 to 30 weeks old. 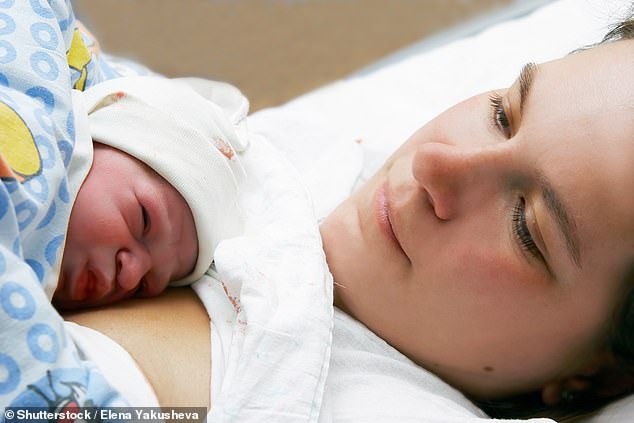 Babies kept away from their mothers in incubators after they are born may do worse in life up to 20 years later, a study has found. Stock picture of skin-on-skin cuddles after birth

Researchers looked at 146 babies, half of whom were separated from their mothers and kept in an incubator for around two weeks.

The rest were also born prematurely, but were placed against their mother’s skin for an hour a day.

Their studies show children kept in an incubator slept more badly aged 10, and struggled to exercise control over their emotions.

And the latest findings, following the babies kept from their mothers until they were 20 years old, show their stress levels rose higher when asked to do public speaking and difficult arithmetic.

When a young baby connects with its mother, this is believed to ‘tune’ its brain for social behaviour later in life.

Professor Ruth Feldman, from the Interdisciplinary Centre in Herzliya, Israel, presented the research in Seattle, at the annual conference of the American Association for the Advancement of Science.

Premature babies given skin-to-skin contact with their mothers develop better than those placed in incubators, a study in 2016 found.

The technique, known as ‘kangaroo’ care, involves a mother nestling her child on her chest – as if in a pouch – as soon as possible after birth.

The baby is exclusively breastfed and the mother becomes its main source of heat and stimulation in its first few weeks.

The study, published in the Pediatrics medical journal, tracked two groups of premature babies over 20 years.

The death rate among those who had been placed in incubators were more than double that of the babies cared for using the kangaroo method – 7.7 per cent compared to 3.5 per cent.

Kangaroo babies spent 23 per cent more time at kindergarten and had less than half the rate of school absenteeism. When they later went out to work, their average hourly wages were almost 53 per cent higher.

Scores for aggressiveness and hyperactivity were also 16 per cent lower, particularly among children from less-educated families. And tests after 20 years found a 3.6 per cent advantage in IQ for kangaroo babies.

On babies kept in incubators, she said: ‘Life will be a little harder and I think it will be harder for them to reach their full potential.’

At three months old, babies held close to their mother rather than kept in an incubator were better at regulating their emotions.

They could tolerate difficult situations, like a loud bell being rung next to them or a toy car with brightly flashing lights, for longer without reacting.

Aged five, they showed more self-control, and were less likely to tear open a present a researcher had told them not to unwrap.

This behaviour has been linked to how likely people are to do well in their education and work life when they are older.

At 10 years old, children fitted with a wrist-worn tracker over five nights had less trouble falling asleep, and were better at nodding off again after waking in the night, if they had skin to skin contact with their mother early in their life.

The latest results, presented at the AAAS conference and not yet published, show babies given kangaroo care are less vulnerable to stress as adults.

These children, at the age of 20, were asked to speak in front of a panel of intimidating ‘judges’ in white coats, and to count backwards from a high number, subtracting 13 each time.

The situation caused a higher level of the stress hormone cortisol in people kept in an incubator without kangaroo care.

These people also showed higher levels of inflammation – a reaction to all kinds of stress in the body which can lead to physical and mental health problems – and which Professor Feldman said ‘really sets the stage for problems later on in adulthood’.

Babies born before 34 weeks of pregnancy may need to be placed in incubators to provide help with breathing, feeding and warmth. But placed on the mother’s chest, beneath clothing, they can also be kept warm for a short period.

Professor Feldman said the benefits of touch at a young age between babies and mothers are likely to apply to all children, and not just those born prematurely.

She said: ‘If we provide maternal bodily contact in this critical period, even if it’s for an hour a day, then the infant is not deprived of it for weeks.

‘Then this intervention reorganises the brain.’

‘It can help calm babies, especially if they are having any painful or distressing procedures, but it can also help reduce parents’ stress or anxiety too.’

Andrew Shennan, professor of obstetrics at King’s College London, said: ‘Kangaroo care is known to be beneficial to babies, and it is plausible that this care could benefit brain development.

‘Around the time of birth, especially in premature babies, inflammation is known to affect the brain and this can be influenced by stress hormones.

‘A calming environment associated with kangaroo care will reduce these stress hormones, which could explain the results seen over the impressive 20-year follow-up, although more research is needed.’