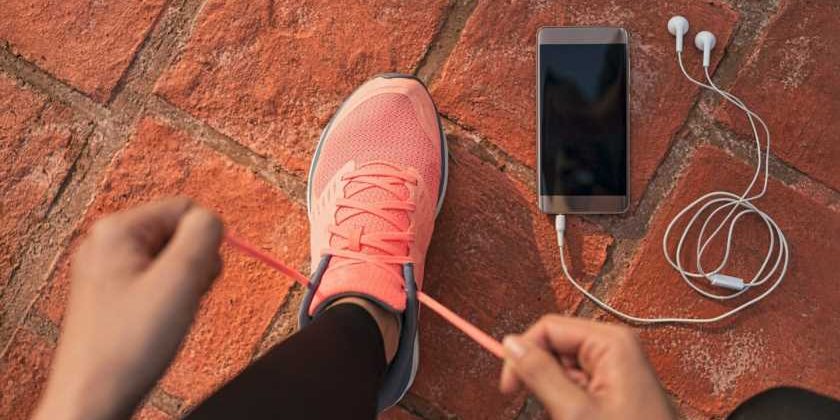 How’s that running New Year’s Resolution going? If you’re struggling to get into it as a beginner, take these tips from Stylist’s Lauren Geall, who learnt to love it by training herself to run 5k.

Until the last couple of years, I’d never been a fan of running. It’s not like I hadn’t tried to get into it – in fact, I downloaded the Couch to 5k app more times than I can count – but despite my good intentions, I’d never quite gotten the hang of it.

You see, to me, running always felt like a bit of a chore. Even towards the end of 2020, when I started getting into fitness more and began working out on a regular basis, the idea of going out for a run still felt completely unappealing.

How to get into exercise for the first time, from someone who did it

And even on the rare occasions when I did manage to force myself out the door, things didn’t exactly go well. I’d spend most of the time thinking about how unfit and out of breath I was and berating myself for not being able to go further – so much so that I’d find myself feeling deflated and demotivated by the end of every run, and put off going for another one for at least a couple of weeks.

So, because of this – and the fact that the dark winter nights made getting out for a run after work impossible anyway – I decided to take a break from trying to get into running until the start of 2021.

However, when spring arrived, things changed. With the lighter evenings and warmer temperatures, the idea of spending my evenings after work inside doing a home workout just didn’t feel as appealing as before. So, I decided to try running again – albeit with a few major changes to how I went about it.

Running: When Spring arrived, Lauren decided to do things differently.

And guess what? It worked. In just under two months I went from hating running to being able to run 5k (and actually enjoying it).

Instead of triggering negative feelings towards myself and my body, I now find going for a run a great way to help me deal with stress and look after my mental health – and it’s quickly become one of my favourite ways to switch off at the end of a day.

Not only that, but I also feel fitter – and it’s made a real difference to my confidence when it comes to exercise in general, too.

So, whether you’re struggling with your own motivation when it comes to running, want to push yourself to go further or want to start running from scratch, here are the three main changes I made to my approach that helped me to fall in love with it for the first time.

I’m no personal trainer, and what worked for me might not work for you, but if you’ve struggled with running in the past and want to try a different approach, here’s how I did it.

I took things at my own pace

The biggest and most significant change I made when I started running again was making the decision to take things at my own pace.

This meant doing a number of things differently. Not only did I avoid all premade running apps and training plans, but I also ran alone and made a conscious effort not to compare my runs to those of my friends, family or people on social media.

As a result, instead of forcing myself to meet the expectations of a plan or individual, I took every day as it came, steadily building up how far I was going as my fitness increased. In turn, this stopped me from feeling demotivated that I wasn’t running ‘fast enough’ or doing things the right way.

Running: “Not only did I avoid all premade running apps and training plans, but I also ran alone and made a conscious effort not to compare my runs to those of my friends, family or people on social media.”

I didn’t set any hard and fast goals

Although I eventually ended up running 5k, I didn’t set out with that as a goal. In fact, I refused to let myself set any target or goal from the start, and instead tried to view every run as its own individual thing.

Not only did this make it easier to listen to my body (I could run for as long or as little as I felt right, rather than trying to hit a specific target), but it also stopped me from feeling overwhelmed or intimidated by how far away I was from reaching my goal.

You see, as someone who has always found running hard and struggled to make progress, having a big goal to reach often became the opposite of motivating – being so far away from being able to hit it just made it easier for me to belittle myself and my abilities.

I listened to my body

Perhaps the most important change I made this time around was making the decision to listen to my body.

When I felt tired and worn out, I focused on doing a short but successful run, and when I felt good, I really tried to push myself.

Intuitive exercise: how to take the pressure off your fitness regime

It may sound obvious, but as someone who has always struggled with my confidence and motivation levels when it comes to exercise, it made a massive difference because it meant I wasn’t forcing myself to do something I didn’t feel capable of doing.

Sure, I might have been able to go further and progress faster if I had pushed myself every time, but when I’m feeling extra tired, I now know it’s much more valuable for me to finish early and end on a high than keep going and feel deflated at the end.

Attention all runners, joggers and plodders: start your 14-day free trial at the Strong Women Training Club and join us for four weeks of Strength Training for Runners! Over the course of the plan, you’ll strengthen key running muscles, improve core control and work on any imbalances that may be causing injuries. It’s all bodyweight focused, so don’t worry about having to buy any equipment. If you decide it’s not for you, you can cancel after 14 days without spending a penny. Get ready to run stronger!