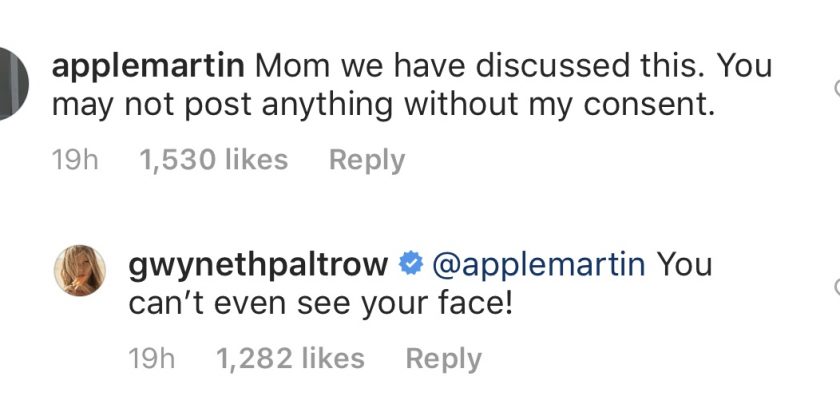 In the age of social media, embarrassing parents are no longer relegated to the school drop-off line: they're front and center on your feed, leaving comments à la Mick Jagger's iconic "Watch out for the water" quip on his son Lucas' photo of him at the beach.

Celebrity kids are no exceptions, with their famous parents mercilessly trolling them on the regular. But the Apple doesn't fall far from the tree (just ask Gwyneth Paltrow!), and celeb kids have been responding in kind with their own sassy comments. Even adult A-listers have gotten in on the action, calling out their parents for sharing TMI. Below, some of the most glorious gems

Teenage siblings may not always see eye-to-eye, but one thing 18-year-old Zaire and 13-year-old Zaya agree upon? They do not want to see their dad celebrating turning 39 in his literal birthday suit alongside wife Gabrielle Union. "This isn't what I needed to wake up to," Zaire wrote with a nauseated emoji, while Zaya scolded her parents, "Ayooooo chill, I just got on!"

Gwyneth Paltrow may love to pose in her "birthday suit," but her 16-year-old daughter, Apple, who Gwyneth shares with ex-husband Chris Martin, is not such a huge fan. Paltrow posted a playful photo on social media in honor of her 48th birthday, captioning the shot, "In nothing but my birthday suit today."

"Thank you all so much for the birthday wishes and thank you to @goop's insanely amazing brand new body butter for making me think I can still get my kit off," she added.

Apple responded by commenting the classic, all-caps "MOM" in the comments section, as captured by Comments by Celebs.

The Goop founder then responded to her daughter's comment with three laughing in tears emojis.

And that's not the first time Apple got sassy on the 'Gram!

While the 16-year-old may share her mom's fair hair and blue eyes, she isn't quite on board with her affinity for selfies — at least, not when they're posted without her permission.

Apple addressed her famous mom's decision to share a selfie of the two of them on a ski lift, where her eyes and forehead were covered by reflective ski goggles. "Mom we have discussed this," Apple wrote in the comments. "You may not post anything without my consent." Paltrow defended herself, pointing out, "You can't even see your face!"

Watch What Happens when the Bravo host's mom, Evelyn, gets a glimpse of his glorious '90s throwback photo of himself rocking a Speedo on the beach in Mykonos. While many of the Real Housewives chimed in with positive feedback ("BIG DADDY ♥️," RHOBH's Lisa Rinna wrote), his mom had a hilariously different reaction: "Get a grip," she commented in an interaction highlighted by Comments by Celebs.

Andy, 50, was quick to return her sass in the comments, writing back, "my own mother is trolling me!?"

Rob Lowe's sons John Owen, 23, and Matthew Edward, 25, could teach a master class on how to troll your famous parents. The two are frequent commenters on their dad's Instagram account, with Comments by Celebs capturing some of their best quips.

On a sexy shirtless snap of the Parks and Recreation alum working out, John joked: "This is the worst thing that has ever happened to Instagram" (to which we politely disagree). In a more recent (semi-shirtless) snap of Rob dressed as a caveman, wearing a fur pelt alongside the cast of The Invention of Lying, his youngest son suggested he retain some modesty, writing, "Put ur nip away."

Lowe's oldest son was quick to poke fun at his dad's apparently over-zealous appreciation of springtime. "Love the DC cherry blossoms," Rob captioned a photo of the trees in full bloom. "Oh trust me we know," Matthew wrote.

Kelly Ripa and Mark Consuelos aren't shy about sharing steamy photos or leaving flirty captions on each other's Instagram accounts, and we are here for it — but their 17-year-old daughter Lola remains unamused by her parents' PDA. When the Live! with Kelly and Ryan co-host shared a 2007 throwback of her hubby standing behind her with his hands resting below her waist, her daughter expressed exasperation with her mom's caption, which included "Those hands 💕."

"Is the caption necessary," Lola commented, adding a face-palm emoji. Ripa brushed her off with a waving hand emoji, jokingly responding, "Gurl bye."

Seth Rogen's mom, Sandy, frequently gives her famously funny son a run for his money on her hilarious Twitter account, which boasts more than 87,000 followers. Her motherly musings range from sex to the propriety of who gets the middle armrest on a flight, and the Pineapple Express star often expresses his discomfort with a succinct incredulous outburst: "MOM!"

In one exchange, Sandy asked her followers for advice on a "dilemma" she experienced during a yoga class. "In yoga when you can see the very private parts of the woman in front of you through her pants, should you tell her?" she asked, prompting her to acknowledge an uncomfortable possibility: "Maybe the person behind me can see the outline of my private parts. Dilemma."

A horrified Seth retweeted her, adding, "Jesus mom." Undeterred, Sandy replied, "Well it was real and i wonder if she really would have wanted her ' hoo hoo' so obvious," which left Seth no recourse beyond type-shouting "MOM!"

The pair have bantered back and forth over Sandy's candid tweets before, including when the Rogen family matriarch noted that "Falling asleep after sex is like shavasana after yoga!" The actor and his older sister Danya responded in disgust, with Seth writing "Jesus f—— Christ mom" and Danya adding, "Seriously, I actually gagged," along with the sick-face emoji.

Judd Apatow's younger daughter Iris has learned a thing or two from her comedic producer father. The 16-year-old playfully turned the tables on the archetypal protective father-daughter relationship, as captured by Comments by Celebs, when the Knocked Up producer shared a photo of himself sitting beside host Stephen Colbert while wearing a half-open button down during an interview on The Late Show.

"Judd. Please keep it elegant," she chastised him. "This is very suggestive, there are creeps on the internet. I'm just trying to protect you."