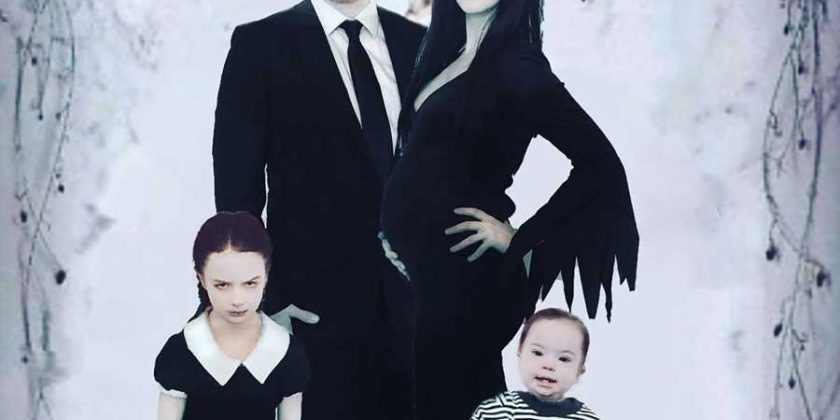 Caterina Scorsone has spooktacular news: her family of four is expanding!

The 38-year-old Grey’s Anatomy star, whose character Amelia Frances Shepherd discovered she was pregnant early this season, announced on Instagram Friday that she was expecting her third child with husband Rob Giles.

Scorsone made the exciting announcement alongside a photo of herself, her husband and their two kids —  daughters Paloma “Pippa” Michaela, 2½, and Eliza, 7 — dressed up as the Addams Family for Halloween.

In the shot, Scorsone, who wore a Morticia Addams costume, stood to the side and cradled her growing baby bump as her family posed beside her.

“Our Family’s about to get even kookier. #pumpkinintheoven 🎃,” she captioned the image, referencing a lyric from the show’s theme song.

The actress has been outspoken about raising her girls and how her perception of parenthood has shifted over time, especially after she learned that Pippa had been diagnosed with Down syndrome.

“What I unconsciously thought about my job as a mother was that I was supposed to equip her to survive in a competitive world,” Scorsone said in March on the Motherly podcast, explaining that she was initially sent “into a tailspin” when she realized Pippa “was going to have some physical differences and some cognitive differences.”

But one day, things just clicked.

“This simple voice came to me where I was like, ‘I don’t know what to do — oh, I’m supposed to keep her safe and I’m supposed to make her feel loved,'” she said. “And suddenly my understanding of my job as a mother completely distilled and opened.”

Since becoming a mother, Scorsone has quickly fallen in love with parenthood — though she admits it’s been a learning process for her and Giles, as well.

“I think one thing that changes when you have kids is that nothing is in your control anymore,” the actress told PEOPLE in April. “You have to roll with whatever is happening and there are people that are now in your life very intimately and in your space who have distinctly different personalities from you.”

“You kind of have an opportunity to get to know them and see what they like and accommodate how they want to be in the world. All [while] trying to make it look awesome,” she added. “So you kind of have to develop your sense of humor and just laugh at all of the places where you thought that you were protecting your ego because it’s done.”

“I think the strange thing about parenthood that you hear and it turns out to be true is that everything about them becomes beautiful,” Scorsone said.